Frank Giustra on the Road in Colombia 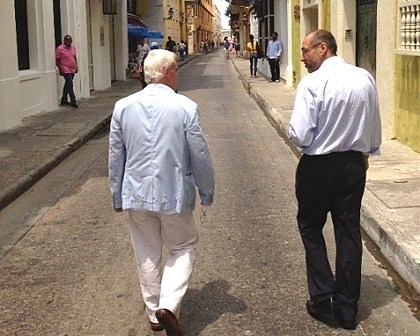 Frank Giustra and Serafino Iacono on the road in Cartagena, Colombia.

“We were almost killed several times,” Frank Giustra tells me. He’s recalling his first trip to Colombia in 1994 with his friend Serafino Iacono. FARC guerrillas and cocaine traffickers had made the country the most dangerous in the Americas, but it seemed like nothing could stop the two young natural resource promoters’ quest for the next big score.

Fast forward twenty years, and Frank Giustra has been involved in the creation of at least four multi-billion dollar companies.

“Fino,” as Iacono is known in Colombia, is a larger than life figure. He talks constantly, gesticulates insistently, and is always smoking a menthol. In a voice that booms with the New York accent he picked up as a kid, Fino seems to start off all his conversations with “We are the biggest,” “This is the first,” and “We are the only.”

Iacono saw opportunity in the Colombian raw materials sector before anyone else. This is why he’s one of the country’s most successful entrepreneurs today — one who has, for example, Colombian presidents both past and present on speed dial. And Frank Giustra, his closest backer, has provided valuable financial and political capital along the way.

The Pacific Group — Iacono’s companies in Colombia and elsewhere — are known by their common name, most having “Pacific” in their title. The Group’s holdings encompass mining, energy, agriculture, infrastructure, and beyond. Anchored by the wildly successful mid-tier oil producer Pacific Rubiales, the Pacific Group is one of Colombia’s largest conglomerates.

Joining Pacific Rubiales in the public portfolio is Pacific Coal Resources (Stock Profile - TSXV:PAK) and Gran Colombia Gold (Stock Profile - TSX:GCM), both of which are suffering, like most other junior miners in this nasty market. Today, both PAK and GCM trade at just a fraction of the the capital invested in each project.

Blue Pacific — Iacono and Giustra’s private company led by Jaime Perez Branger — owns ports under construction in Cartagena and Barranquilla, as well as power plants, farms, mines, and other infrastructure assets scattered across the country. I was able to tour several of these with Fino and Frank late last week.

Colombia has made a radical transformation over the past decade. A partial result of Fino’s regional oil discoveries, Colombia has seen a great reduction in guerrilla and drug-related violence, and a subsequent increase in domestic production.

“Colombia is the longest standing democracy in South America,” Fino tells me, his ever-present security detail hovering ominously at our periphery. “I never feel like I’m in danger here.”

“People also forget that, even in the worst years of the violence, Colombia’s banks paid their bills,” he says. According to Business Monitor International (BMI), the country “boasts an unblemished debt record and looks set to improve its budget deficit significantly over the medium term.”

Further, Colombia’s labor force is both highly qualified and competitive. “We expect the infrastructure, mining, and oil and gas sectors will continue to receive significant amounts of investment from abroad. The country’s vast untapped oil & gas reserves, combined with a favourable business environment and investment-friendly government licensing programmes, will continue to attract foreign investment into energy companies,” said BMI.

The recent US Congressional ratification of the US-Colombia free trade agreement is another shot in the arm for the country, enabling further infrastructure improvements.

It’s no mystery, then, why the BMI declared that Colombia is one of its favourite infrastructure markets in the region, and forecasted an average 5.4% growth between 2013 and 2017.

Net net, the future is bright for Colombia, and Fino and Frank’s Blue Pacific is moving along at a rapid pace.

“In the resource business, you have to look at the related businesses of each of these commodities.” Fino tells his guests over whisky with coconut water one night. “The other products and materials used in production, the infrastructure… Do you have any idea how much lime it takes to produce gold at our mines, and how big of an opportunity there is in the lime business in South America, along with all the gold production coming on stream?” he continued. “Do you know how many steel valves we use at Pacific Rubiales? How much light oil we need as a diluent for our heavy oil production?”

Of all the companies in Frank and Fino’s portfolio, Petroamerica Oil (TSXV:PTA) is the one they’re most excited about. “There’s a huge opportunity for Petroamerica to be the consolidator of light oil projects in Colombia,” Fino says. “CEO Nelson [Navarette] is the top oil executive in Colombia, with the best connections in the country. This is the next Pacific Rubiales.”

Frank and Fino are two of the largest holders of PTA shares, last at 32 cents.

As for the state of public markets for junior resource developers, project valuations have become irrational. “This is the worst I can remember it,” Fino tells me.

“A bull market will always go higher, and a bear market will fall farther than you expect it will,” Giustra tells me on Friday. We’re in a SUV in a police-led motorcade, on our way to a soccer match in Barranquilla. Fino adds: “That’s why we’re doing our infrastructure investments in Blue Pacific private for now. So we can focus on creating value, and not the share prices.”

“The past decade was the greatest bull market of all time in our sector, it was almost ridiculous,” Giustra continues. “Shells used to go to 80 cents on anticipation of something happening, and that’s what the market is coming to terms with now.”

Mining stocks have fallen so far that Giustra, one of the most successful market timers in the precious metals sector, has begun to sell his bullion position in favor of the gold miners.

When an investor with a track record like Frank Giustra’s makes a market call like that, it’s worth taking notice.

The subject changes to the challenges facing Gran Colombia Gold, the nation’s largest gold producer. With a current market cap of only ~$100 million, GCM reminds us just how small the Colombian gold industry is, despite numerous projects currently in development represented on the TSXV.

“We have invested hundreds of millions of dollars in Gran Colombia and have increased our production and enhanced our profitability this year. But the market is not impressed,” Fino said.

The company has missed expectations, and like other producers, has reminded investors that gold mining is a difficult business. But to Fino’s credit, Gran Colombia is financed to get back on track in 2013 and 2014 with the assistance of gold and silver notes, a recent debt financing.

One of my biggest takeaways from Colombia is that if you want to be a real resource developer — and not just a promoter of moose pasture — you need the vision and the guts to chase the impossible.

But more than anything, you need the right people around you.

“Our silver notes are trading at only .70 cents on the dollar, Frank, can you believe that?” Fino says from the front seat of the SUV. Sitting beside me in the back seat, Giustra pulls out his Blackberry dismissively. A minute later he says, “I just bought $500,000 of the silver notes at .70, Fino.” He obviously thinks his friend is good for it.