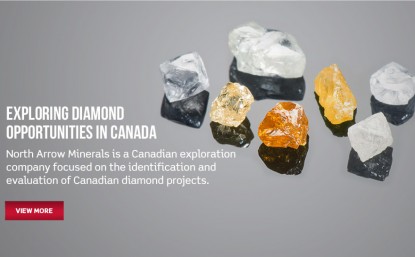 The highest priority project for North Arrow is Qilalugaq in Nunavut, which is currently undergoing a bulk sample and diamond value, with results expected in the next quarter.

North Arrow Minerals (NAR.V) is a promising diamond exploration company with a portfolio of projects in Northern Canada.

The company has extremely successful backers in the diamond industry, with Gren Thomas serving as Chairman, and his daughter Eira Thomas acting as an advisor to North Arrow. The Thomas's led the Diavik diamond discovery in the early 1990s. Additionally, world renowned natural resources developers, the Lundin Group, led by patriarch Lukas Lundin, are major shareholders in the junior company. Mr. Lundin is coming off a big success building the Karowe diamond mine in Botswana with his Lucara Diamond Corp, and has been looking for assets to expand the company.

North Arrow's highest priority project, Qilalugaq in Nunavut, is currently undergoing a bulk sample and diamond value, with results expected in the next quarter that could be transformational for the small company.

North Arrow's second highest priority project, Pikoo in Saskatchewan, is a bonafide diamond discovery of its own.In 2013, the company drilled 2000 meters at Pikoo, hitting kimberlite in 9 of 10 holes, and finding significant quantities of commercial sized diamonds (news release here). These were some of the most promising initial diamond results in the history Canada's diamond business.

Earlier this week, North Arrow commenced a 3000 meter drill program at Pikoo. The program will test some of the new targets, and continue to test the area around the 2013 discovery, known as PK-150.

If drilling hits kimberlite, samples will be then tested for diamonds. Results are expected throughout the Spring.

I am a shareholder in the company and have been covering it in our Resource Opportunities newsletter ($299/yr), and they are a sponsor of our upcoming Subscriber Investment Summit in Toronto on February 28, 2015. There are just a few spots left and we urge loyal CEO.ca readers to attend (Registration link).

Sign up at North Arrow's site to be first to hear of the results and keep your eyes on the company this Spring.

This is not intended to be investment advice of any kind and readers are strongly encouraged to do their own due diligence and consult a professional investment advisor before making any investment decision. This article and video contains "forward-looking statements" including but not limited to statements with respect to North Arrow’s plans, the estimation of a mineral resource and the success of exploration activities. Forward-looking statements, while based on management's best estimates and assumptions, are subject to risks and uncertainties that may cause actual results to be materially different from those expressed or implied by such forward-looking statements, including but not limited to: risks related to the successful integration of acquisitions; risks related to general economic and market conditions; closing of financing; the timing and content of upcoming work programs; actual results of proposed exploration activities; possible variations in mineral resources or grade; failure of plant, equipment or processes to operate as anticipated; accidents, labour disputes, title disputes, claims and limitations on insurance coverage and other risks of the mining industry; changes in national and local government regulation of mining operations, tax rules and regulations. Although North Arrow has attempted to identify important factors that could cause actual results to differ materially from those contained in forward-looking statements, there may be other factors that cause results not to be as anticipated, estimated or intended. There can be no assurance that such statements will prove to be accurate, as actual results and future events could differ materially from those anticipated in such statements. Accordingly, readers should not place undue reliance on forward-looking statements. Always do your own due diligence.