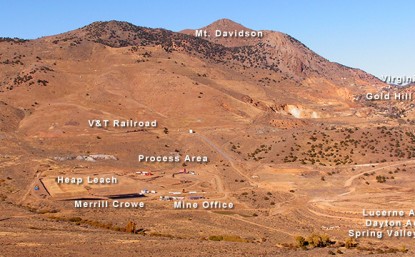 The following interview of CEO Corrado De Gasperis of Comstock Mining (LODE) was conducted by phone and email over the week ending March 16th. The views and opinions expressed by Mr. De Gasperis are entirely his own. I, Peter Epstein have no prior or existing relationship with any company named herein.

Please describe Comstock Mining (LODE) to readers not familiar with your story.

We are a Nevada-based, permitted and producing gold and silver mining company, trading on the NYSE MKT exchange under the symbol LODE.  The Company has already achieved unprecedented results, like consolidating substantially all of the historic, world-class Comstock Lode mining district south of Virginia City, with approximately 8,300 acres (over 10 square miles) along an approximately six-mile long, contiguous mineralized trend. The Comstock Lode district is best known for producing over 8 million ounces of gold and 192 million ounces of silver, primarily in the late 1800’s, including 33 bonanzas, but no one has ever been able to take this massive, fragmented, complex property position with all of its dynamics, and put it under one roof, until now (not to mention permitting it and going into production).

There’s been a lot of local press reports about a road adjacent to your property that needs to be re-routed. Is this a big a deal, will it impact production?

The road in question is a state route, SR-342, that was built on loose fill and eroded from weather events to the point that it needs to be re-routed.  We will move the road as we were planning on doing anyway, but it will help the State, help the County and accelerate many of our business and reclamation plans.  Classic win-win-win.

Some shareholders feel that production growth has been slower (or even much slower) than expected. Do you agree?

Yes, we had originally planned for ramping up Lucerne to a 40,000 gold equivalent ounce run rate per annum last year, but those mine plans, and a lower gold price, required us to modify.  We increased our economic cutoff rate and we also invested significant resources on enhancing the geologic controls, resulting in a much more reliable and predictable mine plan.  These cumulative changes initially resulted in much higher strip ratios before we worked through that section of the mine and reached the flatter, lower strip sections of the Lucerne Mine.

Concurrently, we also dramatically reduced costs, by over $11 million dollars, year on year.  Today, we not only have a drastically improved strip ratio but we can also leverage a much lower and more flexible cost structure as we expand. During this same period, we received permitting approvals to expand the scope of the initial mine area, going from about 180 acres under permit to approximately 1,300 acres under permit. I am proud of how our team responded to the adversity and we feel we are much better positioned for profitable growth by working through that adversity.

Why isn’t your second mine, Dayton, not in production yet?

The Dayton is our second, high priority target area. Our original drilling, although limited, quantified over 0.5 million gold equivalent ounces of initial resource. Last year, we restructured the purchase to completely eliminate the royalty (it’s 100% owned and royalty free) and rezoned all the lands to a mining designation.  We have since done geophysical, structural and core drilling, with significant continuity of the mineralized structure confirmed and further discoveries identified.  We are planning to complete the exploration and development drilling this year, formalize our feasibility for the full mine plan and facilitate the permitting, all in 2015.

What is the biggest pushback you get from prospective investors in Comstock Mining?

Investors have been waiting for cash flow and are excited to see that cash flow reinvested in exploration and development with positive results. Our recent drill results on the Eastside of Lucerne are the first example of that.  The last three quarters, we were cash flow positive from operations, yet the Company was still reducing costs, expanding permits, acquiring and very effectively re-zoning land, developing the mine, and expanding the heap leach pad.   With dramatically lower costs, we guided to full profitability for the first half of 2015.  The stronger that track record, the stronger the investment interest will be.

Can you give us a snapshot of your latest capital structure including cash, preferred shares and debt?

Our capital base has been strong since we recapitalized in 2010, with an exceptionally high quality base of institutional investors.  We have 89.8 million shares outstanding, with $48.6 million of additional permanent equity in a preferred stock, which, if converted, represents another 53.6 million common shares, for a little over 143.4 million fully diluted shares. At the end of 2014, the Company had approximately $1 million drawn on a $5 million Revolver, $6.9 million in equipment financing and $3.6 million for notes payable on land purchases. The Company also had $5.3 million in cash.

No, not since our preferred stock represents permanent equity capital that has no debt-like features. The holders of the preferred stock have been investors for between 5-10 years, and have provided significant funding for the initial consolidation and production growth phases of the Company. The preferred stock is convertible to a fixed underlying number of common shares. The average conversion price is $1.10 (ranging from $0.65 – $1.65).

To the extent that you think Comstock is undervalued, why do you think that might be?

Investors want to see sustainable positive cash flows. We are confident we are on that mark now and coupled with a better appreciation of our significantly lower costs, driven by improved mine planning, better grades, lower strip ratios and excellent yields, should result in much better valuations. Overall, the market is valuing gold equities as if gold was closer to $850. We feel the best upside will come from those few companies that have their permits, producing with good cost structures and yet retain tremendous exploration upside potential (remember we control the entire district).  Its’s these types of companies, like ours, that will deliver the most significant equity upside.

Can you name any of your largest shareholders? What percentage of your shares are owned by management & the Board?

We have one of the strongest capital bases with funds like Van Den Berg Management (Century Asset), US Global Investors, Inc., Sun Valley Gold LLC, The Vanguard Group, Inc., Gabelli Funds LLC, Solus Asset Management, Wedbush Securities, with the largest holder being the Winfield Group.  Our management and board have about 4%, and when you include our Chairman, its over 35%.

Please describe Comstock’s all-in costs for gold equivalent ounce for the latest reported quarter or for 2014.

During the fourth quarter of 2014, our all-in cash costs was $1,243, with all cash mining costs at $843 per gold equivalent ounce, general and administrative at $261 and capital at $139 per gold equivalent ounce. In December, we achieved our cash mining cost target of less than $750. For the first six months of this year, we anticipate being below the $750 per ounce with our all-in costs below $1,000 in the second quarter.

What are the catalysts to watch for in 2015?

In Lucerne, we are expanding our mine eastward, based on recently received permits and rapidly developing feasibility for a higher grade, underground operation.  We also plan a second expansion in the Dayton Resource Area.  For Dayton, we plan on further drilling, expanding the known resource, finalizing a mine plan and permitting and commissioning our second mining operation.  Our most important catalyst, is our cash flows. In 2014, we turned positive with cash flow from operations and we are now building on that success with lower strip ratios, better yields and absolute lower costs across all activities.

Assuming smooth sailing in 2015, roughly how many ounces of gold equivalent ounces might you be able to produce in 2016?

Optimally, in 2015, we would have two sources of ore, from Lucerne (surface and underground) and one from Dayton.  This would ensure a consistent 40,000 ounce run rate, per annum, scaling up to potentially 75,000 ounces, from all three sources. There is still some drilling and development to do but the path is there. Ultimately, there is capacity to do much more, but it’s a good growth path for 2016.

Are there any misconceptions about Comstock Mining that you would like to address?

The obstacles associated with mining in the historic district had more to do with regulatory complexity and developing a strong social license to operate, more than anything else.  We have done that. The historic Comstock Lode’s geology extends much further than previously understood, and by all modern definitions, is significantly under explored. Our land position continues to grow in size and value and we will build on the historical and current geological data to produce a robust model for practical, responsible economic development.