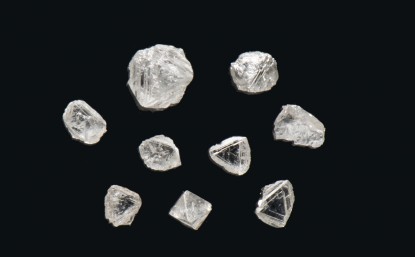 As the crisis in Greece (and now Puerto Rico) intensifies, Global markets (except gold) are tumbling.

The demand for diamonds continues to grow as the world population now exceeds 7 billion people and consumer demand from rising global incomes looks to diamonds both for enjoyment and investment. The two largest consumers of diamonds are the US (no surprise) and China (perhaps more surprising to some). These countries lead jewellery demand for diamonds, with the US at 40% of demand and China in second-place at 16%.

Make no mistake, diamonds are big business. In fact, De Beers reports that the global diamond demand for jewellery was up 3% in 2014 to $81 billion.

With growing demands and a reduced supply from current mines exploration for future diamond mines is needed more than ever. But diamonds are elusive beauties to find and indeed there has been a decline in diamond exploration worldwide as exploration efforts have failed to pan out (See: http://ceo.ca/2015/01/12/jason-stevens-why-i-believe-diamonds-are-a-good-5-year-play/). But the good news is that Canada is brimming with diamond exploration and now a new diamond district at Pikoo (something we’ll get to shortly). 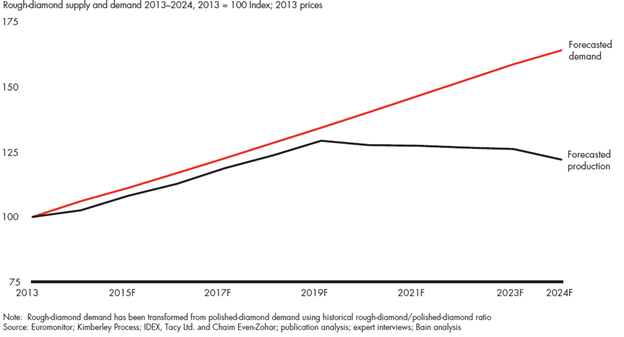 Diamond companies have had their eyes on Canada since the early 1990’s when diamond rich areas were discovered in the Northwest Territories.

Canada is now the 5th largest producer of diamonds in the world behind producing 8% of all diamonds worldwide in 2013.

Diavik – The Diavik Mine is located in the Northwest Territories and is 60% owned by Rio Tinto and 40% by Dominion Diamond. Diavik commenced production in 2003 and produces 6-7 million carats annually. Discovered by Aber Diamond, which was led by mining Hall of Famers Gren Thomas (who now is Chairman at North Arrow Minerals), Diavik continues to have an indicated mine life through 2023 with potential for future expansion.

Ekati -The massive Ekati mine was discovered by Chuck Fipke and Stewart Blusson. Discovered at Lac de Gras, it kicked started the Canadian diamond business and resulted in the biggest land staking rush ever seen in Canadian mining history. With production dating back to 1998, the mine has already produced over 50 million carats.  Ekati is Canada’s first surface and underground diamond mine. Dominion Diamond is the 89% percent owner of the mine. Projected closure is scheduled for 2020 but it is likely the Jay open pit will extend operations an additional 11 years.

Snap Lake  – Snap Lake is expected to produce 1.4 million carats annually and have an approximate lifespan of 20 years from its opening in 2008. Snap Lake was De Beers’ first mine outside of South Africa.

Victor – Victor is also owned by De Beers and is Ontario’s first diamond mine. Annual production is ~600,000 carats. Victor is an open pit mine and approximately $1 billion was spent on the construction of the mine.

Diamond Investing With the Lundins

One of the most successful investing families in the resource markets the Lundin family is bullish on diamonds. Lundin’s first investment in diamonds has turned out extremely well with Lucara Diamonds (LUC:TSX) being one of the best performing resource stocks during the past couple of years.

The Lundin family through Zebra Holdings & Investments has also taken a nearly 20% stake in North Arrow Minerals (NAR:TSXV), a junior diamond company with a portfolio of diamond exploration projects in Canada.

Where will future Canadian diamond production come from?

Stornoway Diamonds (SWY:TSX) is well under way on constructing the Renard Mine in Quebec, which once constructed will be Canada’s newest mine with initial production expected in 2016. This will be the first diamond mine ever in Quebec and is expected to produce 1.6 million carats a year over an 11 year mine life.

Mountain Province Diamonds (MPV:TSX) will be one of the world’s largest and richest diamond mine with production scheduled to commence in Q3, 2016. The project is a joint venture with diamond giant De Beers owning 51% and MPV 49%.

The two new mines once in operation are expected to boost Canada’s market share in world production to 15.1%.

Recent diamond exploration in Canada has turned to the province of Saskatchewan.

Saskatchewan was recently rated the second-best jurisdiction in the world for mining investment, according to a 2014 survey conducted by the Fraser Institute

Diamond exploration companies are hoping add diamonds to the resource rich province as the geology also looks promising for diamond deposits. Saskatchewan has some highly prospective areas of Archean rock which have proved to be successful targets areas for diamond discoveries elsewhere in Canada. 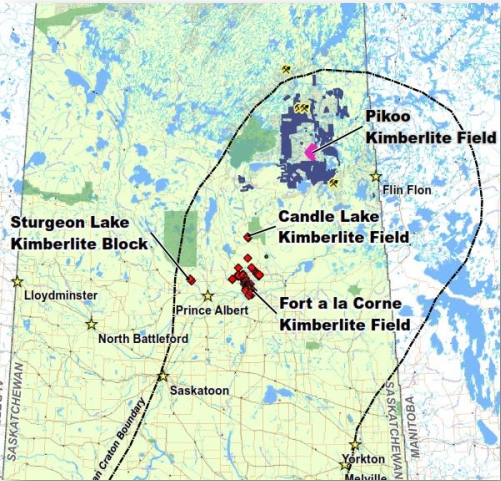 North Arrow Minerals (NAR:TSXV) is the most advanced exploration company in the newly-established Pikoo District, located midway between the well-established gold belt near La Ronge and the long-lived base metals camp near Flin Flon.

In 2013, North Arrow made a significant discovery at Pikoo finding diamondiferous kimberlite and thus making Pikoo in the process one of the world’s newest kimberlite discoveries. A distinct advantage over other diamond regions in Canada is that if an economic diamond deposit can be defined then the infrastructure is excellent by comparison. As example, the Pikoo district already has power lines and a highway.

So what is it that makes Pikoo such an exciting exploration prospect and who can investors look to for exploration opportunities?

“The Sask Craton tectonically has some real similarities to the Slave Craton, which already hosts the three producing mines in the NWT.” Ken Armstrong, CEO, North Arrow Minerals

This led to a declaration by the North Arrow team that Pikoo was Canada’s newest diamond district. That’s a big statement given that much of the team was responsible for some of the most successful diamond companies in Canadian history including such gems as Aber Diamonds and Lucara.

After some extensive till sampling summer work, which is a process of looking for indicators in soil that may have originated from up-ice kimberlites, a recent Spring 2015 drilling program by North Arrow was successful in discovering three more kimberlites and doubling the size of PK150.

PK134 currently has 475kg in for processing micro diamonds with results expected in July 2015. 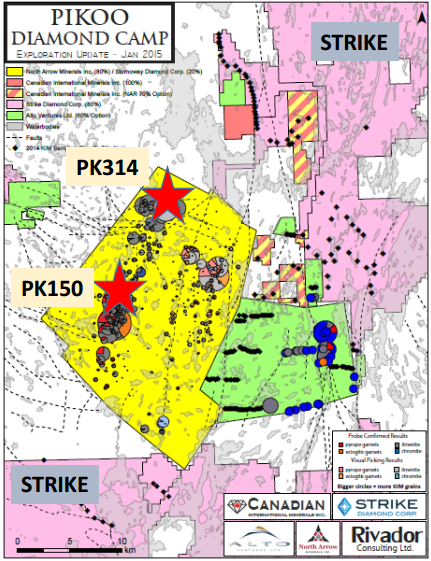 For those who recognize an opportunity at Pikoo, North Arrow is likely to focus even more resources on their Pikoo discovery as a flagship asset going forward. A recent bulk sample from Qilalugaq was below market expectations, which is likely to push more of their $5.5M working capital as of May 31 to the Pikoo region.

Strike Diamond (SRK:TSXV) is an early stage (grassroots) diamond exploration company exploring a large land tenure in Northern Saskatchewan. Strike has a large mineral tenure position in the Pikoo camp which was established shortly after the North Arrow discovery. As a result, it has some highly prospective tenure which is up-ice of recent indicator discovery suggesting that the kimberlites discovered by North Arrow so far in the Pikoo region may be widespread. 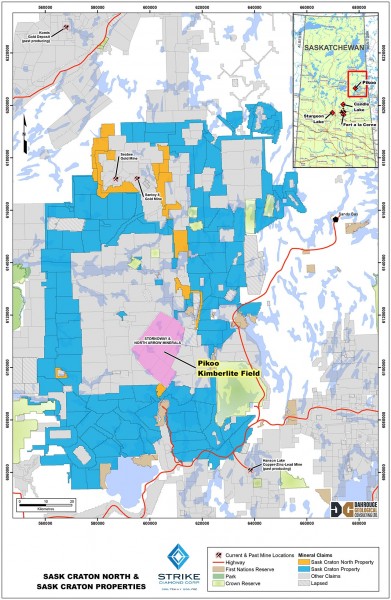 Important take-away: Strike has key land tenures that are located up ice from the discoveries made by North Arrow.

Strike has completed till sampling on the project in 2014 with encouraging results.

Till sampling in the Pikoo diamond district has proven highly effective at identifying diamondiferous kimberlite bodies (as it has elsewhere in Canada).

Strike currently holds an 80% working interest in the Sask Craton projects where it is Operator (the remaining 20% is held by the group that staked the property).

Strike Diamond is led by newly-appointed CEO and serial entrepreneur Ryan Kalt. Most recently, he successfully built and sold then publicly-listed Gold Royalties Corporation to Sandstorm Gold (SSL:TSX) in April 2015, which provided shareholders a 91% takeover premium.

Mr. Kalt a lawyer by background is a young aggressive CEO who has one focus which is to create value for his fellow shareholders. He has his money where his mouth is and as of the end of June 2015 he owns 18.4% of Strike and has been buying more SRK shares recently in the open market.

What’s equally promising is that Ryan seems to be running the company the way old-school successful mining juniors were built. Put the money into the ground, not into management pay cheques. Unlike most CEO’s, Kalt isn’t drawing (or accruing) any salary, which means he’s working for free for the company with 100% shareholder alignment. The only way he will make any money is if the stock goes up.

Another key piece to the Strike team is Vice President, Exploration Jody Dahrouge, P.Geol. Dahrouge has owned a geological consulting company since 1998 which counts a staff in excess of 50 employees. He and his team have evaluated hundreds of projects for public and private companies and he has also been involved in several major projects and companies including management or exploration roles with companies such as Fission Energy and Niocorp as recent examples. Like Strike’s CEO, Mr. Dahrouge also has significant skin in the game owning 18.5% of Strike’s issued float. It is rare for a VP, Exploration for the most part to even own a single share of a company they are working for. So combined, the CEO and VP, Exploration own nearly 40% of the company! That’s a big vote of confidence by Strike’s management in both their own company and their confidence in the Pikoo diamond camp.

Dahrouge boils his interest in Strike and their Pikoo ground quite effectively. “North Arrow’s discovery has remarkable similarities to the early days of the Lac Des Gras discoveries, which ultimately resulted in four diamond mines and one other slated for production, all within the Archean Slave Craton,” noted Dahrouge.

To top off share ownership by management, Blair Way, who is a Director at Strike Diamond also owns 1,400,000 common shares, representing roughly another 5% of the outstanding stock. Way is well known as the CEO of Flinders Resources (FDR:TSXV), which is a producing graphite company with an operating mine in Europe.

Like North Arrow, Strike Diamond is also going to be active this summer exploring the Pikoo camp.

“As we recently announced, Strike Diamond will be following-up our promising indicator sampling program from last fall (which included the discovery of a G9 on our tenure), with an ambitious airborne program this summer. This will allow us to peek beneath the surface on our Pikoo claims and develop additional targeting for more indicator sampling and ultimately drilling,” stated Kalt.

To recap, Canada has quickly put itself on the map for diamond production and discoveries. At Pikoo, North Arrow looks to have established a promising new diamond district.

Companies on the hunt there would appear to have some exciting exploration projects and they are well worth having on your radar.

As to Strike Diamond itself, shareholders could benefit significantly from a tightly held share structure of only 30.0 million outstanding shares (38.0 million fully diluted). By comparison, North Arrow has approximately 54.0 million shares outstanding (still low by standards in the current market). So of course, when looking for stocks with home run potential it is important to take a look at the share structure (along with the people and project). Given that nearly 43% of the float held by insiders, positive exploration news could potentially see rapid share price appreciation.

Disclosure: Strike Diamond Corp. is a sponsor of this website.

Mr. Fraser runs the blog Penny Mining Stocks. He is passionate about the mining industry. His passion led to co-authoring the e-book "Mining Stocks Investor Guide: A Guide to Investing in Mining Companies." He has a finance background and has completed his Canadian Securities Course (CSC) and Conduct and Practices Handbook (CPH). When Fraser is not "digging" up the latest mining stock, he can be found enjoying a wide variety of sports or travelling the world.