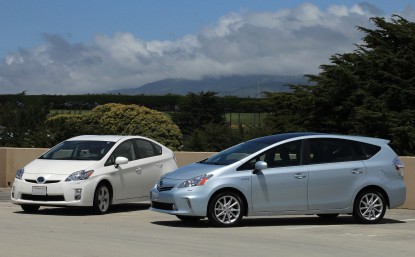 A short time ago, manufactures released hybrid gasoline-electric cars so that they could claim to be green companies. That has completely changed, now the race is on for market share, volumes and profits.

I'm on record as stating that demand for lithium will grow faster than most believe. Conventional wisdom seems to say that overall lithium demand will grow by 8%-12% annually. I understand why that range has been adopted, it's already a fast growth rate by historical standards. Commodity and natural resource demand is frequently said to increase at, "the rate of GDP growth." I wonder which country's GDP rate is being referred to, hopefully not the U.S. A prime reason for my bullishness on lithium demand, with overall growth closer to 20% a year, is that Tesla is attracting A LOT of attention and competition. I will spare readers the obligatory rattling off a list of Tesla's growing competition. But there's much more to the story than Tesla.

I believe that hybrid and plug-in hybrid vehicles will be phased out sooner rather than later. Any manufacturer that can't deliver a full EV within the next 2-4 years might as well start working on flying cars, previously known as airplanes. This paradigm shift to EVs is not 5-10 years away, it's right around the corner. Hundreds of millions or even billions of dollars are deployed on new car platforms, why would it be any different for the builders of EVs? A short time ago, manufactures released hybrid gasoline-electric cars so that they could claim to be, "green" companies. That's completely changed, now the race is on for market share, volumes and profits.

"Range anxiety." That's the cool way of saying that prospective buyers of EVs are on the fence, until they're confident that a massive infrastructure of electric charging stations is in place. Guess what? That's nonsense. According to the U.S. Department of Transportation, average daily driving per capita is about 40 miles. Commuters that drive 100-150 miles or more round trip are the exception, not the rule. Does 40 miles per day sound too low? That's the U.S. average, the range around that average is probably fairly large. Take for example city dwellers that don't drive daily.

If one were talking about natural gas stations, "range anxiety" would be a serious concern. Recall that T. Boone Pickens has been calling for the replacement of gasoline and diesel fueled cars with cleaner burning natural gas. In that highly unlikely scenario there would have to be a huge build out of natural gas stations. Not so with EVs. Electric Vehicles won't require an epic rollout of thousands upon thousands of charging stations. As EVs evolve, there will be dozens of models with driving ranges in excess of 100 miles. By then, range anxiety will disappear. Instead of searching for a charging station, one's garage electricity outlet will do the trick.

Admittedly there are occasions when long distances are called for. In this circumstance, let's assume that a gasoline powered vehicle remains the best alternative. That still allows for EVs to potentially become 1 of the 2 vehicles in a suburban family. That equates to a staggering amount of lithium demand without the need of ubiquitous charging stations. The same will be the case for bikes, motorcycles, mail delivery vehicles and buses, (among others). That's why I believe that the annual growth rate of lithium demand for EVs alone could be as high as 30%, a tripling in 5 years. If the fastest growing segment were to triple (30% growth annually from 2016-2020), that suggests 20% overall demand growth for lithium is not a crazy assumption.

Without range anxiety, EVs will become ubiquitous, not charging stations! This is especially true given that Nissan, Ford, GM and Toyota, (among others) will be coming out with a number of inexpensive EVs with price tags in the $20k-$25k range sooner rather than later. That's before considering favorable State and/or Federal tax treatment. Importantly, the lower price point EVs will not necessarily use less lithium. Not if they want to achieve high milage per charge. Miles per charge will be a key determinate of customer preference. Note that inexpensive EVs will benefit as much as high end EVs, from lower annual operating expenses by plugging in instead of filling up.

While the available supply of lithium is difficult to forecast, and will come on-stream unevenly, demand growth for EVs alone could be two or three times that of today’s consensus. Clearly, the demand for lithium will be lower or higher than expected. Readers probably know which side of the coin I'm betting on. That's why I like a small cap, pure-play lithium company named Dajin Resources Corp. (DJI.V) (DJIFF). Combined U.S. and Canadian trading volume is averaging roughly 625,000 shares per day. The company has no debt and a solid balance sheet. Warrant exercises have been helping to maintain adequate cash balances.

Taking a contrarian view by being substantially more bullish on lithium demand from EVs, calls for an investment approach that differs from those who follow the crowd. Following the crowd is prudent if conventional wisdom prevails. However, for those like me who believe overall demand for lithium could grow by 20% annually, (30% for EVs alone), a way to articulate a bullish position is through juniors such as Dajin Resources. Taking a contrarian view entails both higher risk and higher reward. Unlike following the crowd though, an investment in Dajin Resources could play off quite handsomely. With properties in both Nevada's Lithium Hub, located approximately 12 km northeast of Rockwood's decades long Nevada operations and a very large land position in Argentina's, Lithium Triangle. This company's tock is strongly positioned to move considerably higher upon an increase in lithium prices and/or a rebound in the morbid TSX Venture Exchange.

Dajin Resources (ticker DJI.V) (DJIFF) –  Mr. Epstein owns shares of this company. Investors should consult with their own advisors before making investment decisions. Mr. Epstein is not an investment advisor. The article on this company on EpsteinResearch.com should be viewed in this context. This company is highly speculative and not suitable for all investors. As of [5/1/15] Dajin Resources is a Sponsor of EpsteinResearch.com on a month-to-month basis.