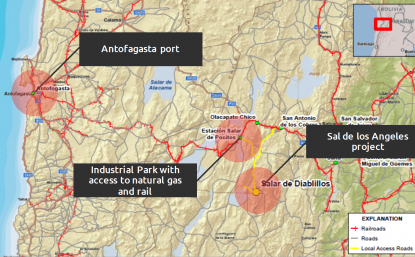 Aberdeen International CEO David Stein comments that Aberdeen focused on partnering with Lithium X because of their management team and access to capital.

Last week, a promising partnership was announced in the lithium mining space with Aberdeen International Inc. (TSX:AAB), the private equity investor, and lithium pure play up-and-comer, Lithium X Energy Corp. (TSX-V: LIX), entering into a partnership agreement to acquire and develop a lithium-potash project located in Argentina. The partnership agreement outlines that Aberdeen International will acquire 80% of Potasio y Litio de Argentina SA, which owns 100% of the Sal de los Angeles lithium-potash project. This Sal de los Angeles project will be developed and operated by Lithium X over the next two years.

The Sal de los Angeles project has plenty going for it. Not only is it situated in the prolific “Lithium Triangle” in the Salta Province of Argentina, previous operators of Sal de los Angeles have invested roughly C$19 million in the property in exploration, drilling and testing. In addition, a positive Preliminary Economic Assessment (PEA) was prepared for the project in 2011.

We had the opportunity to sit down with David Stein, President, CEO and Director of Aberdeen International, to discuss in more detail the partnership between his company and Lithium X and what he looks forward to in working with Lithium X moving forward.

Partnering with a young, pure play lithium company like Lithium X has to be very exciting. What inspired Aberdeen International to establish a partnership with Lithium X? If possible, can you describe how Aberdeen first connected with Lithium X?

Lithium X basically didn’t exist when we were doing our diligence and negotiations to acquire this project in early-to-mid 2015. Right after closing the deal with Rodinia we started receiving interesting proposals, but we focused on Lithium X over the other opportunities because we felt their strong management team which had previous lithium brine experience in Argentina would be a great fit for the project and their access to capital would bring much-needed exposure to this exciting but under-the-radar asset.

What motivated Aberdeen and Lithium X to target specifically The Sal de los Angeles Project in Argentina in its partnership?

Sal de los Angeles (formerly known as Diablillos) is a large conventional lithium brine, located in a deep basin in a mining-friendly jurisdiction. It has been substantially de-risked technically by previous owners, and has many chemical and physical characteristics that suggest it should be among the lowest cost lithium producers in the world. The PEA completed in 2012 was extremely positive, and we expect to build on that as we move the project forward.

Initially Aberdeen will have oversight over the project in two ways. We will have representation on a management committee that will run the project at the asset level. In addition we will initially have two directors on the board of Lithium X. Between corporate oversight and project oversight we will stay heavily engaged in the development of this asset going forward. Our main exposure to the success of the project will be through our large shareholding in Lithium X we receive on closing, so we are motivated to help then any way we can.

The PEA was a very important part of our due diligence and decision to acquire the project, but of course we looked at how it would be updated now almost five years later. At the time the PEA was produced, lithium and the broader commodities market was still in a bull market and the PEA scoped two scenarios, both of which required substantial capex. What we like about the project, based on more recent internal studies we have done, is that we can build a much smaller, but still very profitable operation, to generate cash flow and de-risk the process before we expand and build a larger project. Unlike hard rock mining, brine production is very scalable based on the availability of capital.

Can you comment on the two year timeline for Sal de los Angeles’ feasibility study and how easy or difficult it will be for Lithium X to complete this study in the allotted time given to them?

While no work has been published since 2012, the previous owners did continue to collect data on the project up until now. Our view is two years will be more than enough time to produce a high quality feasibility study on the project.

Demand will be the most significant driver. The market for large format rechargeable batteries (for example for cars) is growing rapidly, and with no technological alternatives on the near-term horizon, lithium demand should continue to benefit for many more years. That being said, supply will grow, slowly at first, to meet demand, and having a conventional project that can be fast-tracked into production is a huge advantage for Sal de Los Angeles.

Do you see any other lithium ventures besides this partnership with Lithium X in Aberdeen’s near future?

We have received a lot of positive market exposure over the past few months from this acquisition and subsequent deal with Lithium X. We are now seen as expert in the lithium space and we are being approached. We are always opportunistic - so it may make sense for Aberdeen to capitalize on these opportunities in the future.

Thank you very much, Mr. Stein.