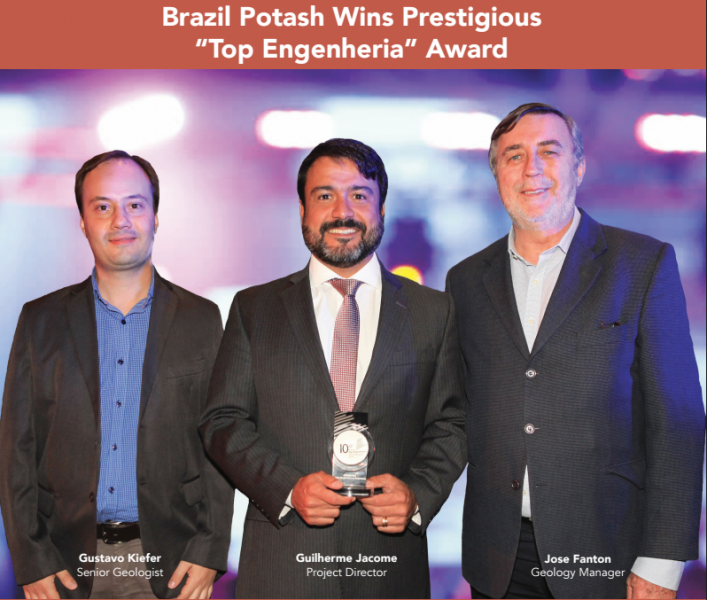 According the United Nations, the world’s population is projected to reach 9.8 billion by 2050 and 11.2 billion by 2100. Countries will need to maximize resources and reduce their reliance on imports to feed their citizens. This reality, in turn, is creating opportunities for companies to play an important role in developing the necessary infrastructure to make agriculture sustainable and reduce carbon emissions.

This year, Brazil Potash, a potash mine development company located in Brazil, received the “Top Engenharia” award as the most recognizable engineering project currently underway in the country’s agribusiness sector by the Federal University of Minas Gerais (“UFMG”) Alumni Association. Every year, UFMG conducts a survey of over 3,000 alumni of its Engineering School, asking them to identify which companies in each sector demonstrate engineering excellence. Brazil Potash’s Autazes project stood out not only for the critical infrastructure it would provide, but also the environmental benefits it will bring.

Potash is an essential nutrient to growing food with no substitute and is therefore vital to feeding the rising global population. At 8.8MTpa of consumption, Brazil is the world’s second largest and fastest growing market for potash, but imports 95% of its needs from mines located 14,000 to 20,000 kilometers away.

Brazil Potash holds exclusive title to a world-class scale potash basin located in the Amazon State of Brazil only 8 kilometers from a major river system that will be used to transport initial planned production of 2.4MTpa on river barges to farmers in Brazil. Based on today’s depressed global oil prices and shipping rates, Brazil Potash is able to mine, process and deliver its potash for the same cost as importers logistics costs alone. This substantial and sustainable logistics cost advantage will increase with anticipated global raising oil prices and results in a Green House Gas (GHG) emission savings of roughly 508kTpa. This project could substantially reduce the country’s reliance on potash imports, while enhancing food security, increasing crop yields and improving supply chain management for Brazilian farmers.

Brazil Potash plans to bring its Autazes potash deposit into production in a low-density cattle farming region of the Central Amazon Basin. Autazes is located 120km southeast of Manaus (population 1.8 million), which is the major economic hub in the region with an international airport. This project will create thousands of good jobs for people, providing stable and secure sources of income in a region with few jobs.

Brazil Potash has completed a Bankable Feasibility Study (BFS), Environmental Impact Assessment (EIA), obtained the Preliminary Social and Environmental License (LP), acquired majority of the land required for the plant and port and diamond drilled 65 holes totaling 59,000m. The company has proven and probable reserves supporting 34 years of mine life based on drilling only ~10% of the land package held.

Construction of a 165-km long electrical transmission line will connect over 100,000 people in the region to the national electricity grid, people who are largely dependent on diesel generated power. The local municipality will benefit from increased tax revenues, which will result in improved schools, water quality, roads and healthcare services.

With over US$185 million invested to date on development, the project is fast approaching the construction phase. This project is critical to the development and security of Brazil's food supply and will ensure a robust agricultural industry for years to come.