Power Americas Minerals (TSX-V: PAM) / (OTCQX: PWMRF) is well positioned among roughly 18 juniors exploring for Cobalt (“Co“) (and associated gold/silver) in the world-class, past-producing Silver-Cobalt Mining Camp in northeastern Ontario, Canada.  Although reports vary, something on the order of 400-750 M ounces of Silver (“Ag”) and 40-50 M pounds of Co were produced in the district.

Others have properties in and around the district, most notably First Cobalt Corp., (TSX-V: FCC) and Cobalt Power Corp. (TSX-V: CPO) who, like Power Americas, have substantially all of their assets in Ontario.  First Cobalt is the bellwether Co name in the region, but it has a C$236 M market cap., ~24 times larger than Power Americas’ ~C$10 M market cap.  Cobalt Power is a ~C$28 M company.  NOTE:  (First Cobalt has by far the largest Co footprint in Ontario, PLUS the only permitted cobalt extraction refinery in North America).

Importantly, none of the new players have advanced beyond early exploration stage.  All of these stocks are highly speculative, and most companies probably would not exist were it not for the booming Co price– which has nearly quadrupled — (from US$21.7k/tonne in Feb 2016 to US$80.5k/tonne in Feb 2018) in the past 2 years.

Importantly, Power Americas has additional drill results to report this month and next.  The Company is looking for multiple hits of 1 or more meters of greater than 1.00% Co mineralization, which would be better than most peers in the district have reported so far. 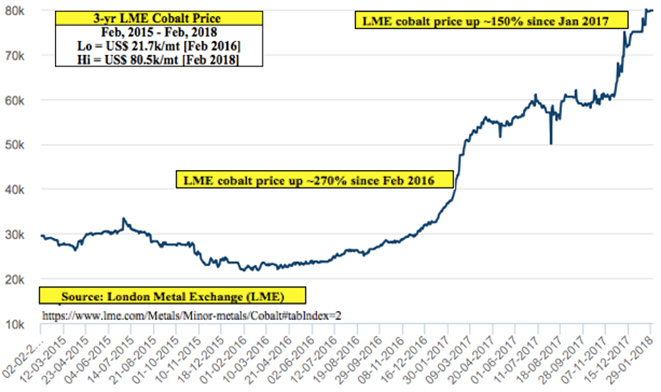 In the Co price chart above, notice the steepness of the curve over just the past several months.  Cobalt has almost quadrupled (up ~270%) since February 2016 and is up ~150% since the beginning of last year.  The move in Co prices is very similar to that of lithium prices, although lithium prices began moving 6-9 months earlier, and have not been moving up lately the way Co prices have.

Readers are likely aware that over 50% of global Co supply comes from the DRC, and that end users are very anxious to source Co elsewhere due to ongoing concerns about child labor law abuses.  Making matters worse, the DRC (suddenly) raised its royalty rate on Co from 2% to 10%, and imposed a 50% “super-profits” tax — defined as income earned on sales of Co at prices > 25% above the price in a Company’s Feasibility Study.

This news comes at the same time that a number of major automakers like BMW, Tesla & Volkswagen are reportedly searching for long-term off-take agreements for cobalt & lithium.  Of note, BMW is said to be close to a 10-yr agreement with an unnamed party.  The DRC will remain the largest producer for years to come, but the playing field is wide open for supply from Canada and other more business-friendly countries.

Given the proverbial perfect storm for cobalt prices, the early-stage projects / properties in and around Cobalt Ontario could be among the better alternatives for Co supply next decade.  Getting back to Power Americas, the management team is excited about the drill results they will be reporting shortly.

“We believe we have assembled a sizable, 100%-owned land package [3,330 ha] that encompasses and surrounds several historical cobalt mines in the most active Cobalt Mining Camp in Canada.  We’re highly encouraged by our initial 2017 Exploration Program’s results, and very excited to build off these results with our 2018 winter program that is currently underway.”

Neil Pettigrew, VP Exploration, explained an important factor that differentiates Power Americas from many nearby peers,

“Cobalt mineralization on the Kittson property occurs both in veins and fractures, this gives us a wider target zone.  The mineralized zone also displays a fairly consistent strike and dip, these advantages give us a faster pathway toward defining what could be the first new NI 43-101 compliant cobalt resource in the camp.”

The Company’s Co contained mineralization is similar to that of the famous Silver-Cobalt Camp in Ontario, Canada, located ~15 km to the east.  It contains the historic Shakt-Davis and Cobalt-Kittson mines, 4 mine shafts and numerous historic workings; the deepest extending down to 628 feet, and combined, > 2,500 feet of lateral development.

In late 2017, management acquired an additional 100% interest in 10 unpatented mining claims totaling ~2,240 hectares.  Eight of the new claims are contiguous to the Kittson property and are interpreted to host the western extension of the Shakt-Davis and Edison mine structures.  The other 2 are ~5 km south of the Kittson properties’ southern boundary.

Drilling is the Main Catalyst This Quarter

Management announced on January 23rd that it has commenced drilling on the 100% owned Kittson-Cobalt project.  A total of 18 holes and 2,000 meters is underway as a follow up on the Fall 2017 ultra-light drill program.  Sixteen holes are planned at the historic Shakt-Davis mine, and 2 on the northern extension of the historic Edison mine.  Drill holes lengths of 75 to 250 m will test mineralization both near surface and below historic workings.  Drill results will be released later this month and into March.

The fracture zone hosting the Shakt-Davis mine has returned grab samples up to 3.66% Co and 1.62% Co over 0.3 m in shallow drilling.  The northern extension of the Edison mine hosts numerous historic trenches which have returned up to 0.49% Co in grab samples.

On January 16th, the Company announced results of their diamond drill program on the Kittson-Cobalt project.  Seven shallow holes, totaling 161 meters were drilled beneath overburden-filled historic workings in the Shakt-Davis mine area.  The program successfully intersected a fracture zone that hosts the Shakt-Davis mineralization over a strike length of 55 m, up to ~30 m deep.  The zone is 5-13 m wide (drilled core length).

“These results represent the first drilling since the 1940’s at the Shakt-Davis mine and confirm the cobalt-rich nature of this extensive fracture zone.  The zone which hosts the Shakt-Davis mine is related to those which also host the Kittson & Edison mines to the north and east, respectively, cumulatively representing over 3 km of strike length.“

Veins hosting the mineralization at Kittson differ from the typical Cobalt Silver Camp veins in that they are lower in Ag but richer in Co, and are associated with zones hosting meaningful amounts of Au.  From assessment files in the Cobalt MNDM office, 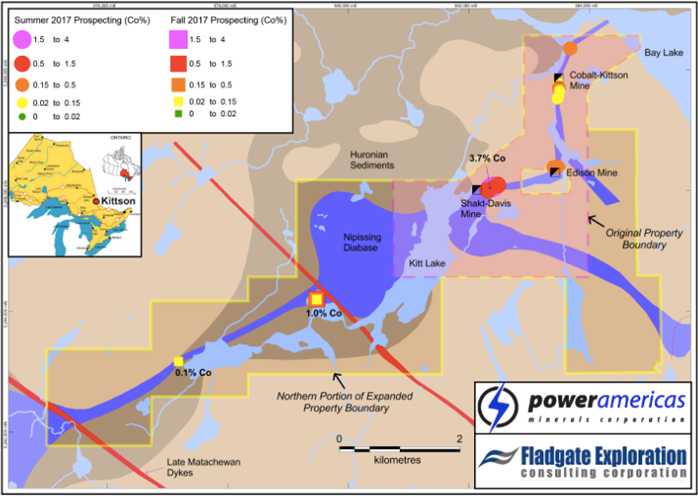 Power Americas Minerals (TSX-V: PAM) / (OTCQX: PWMRF) has as good a chance as any to find promising cobalt mineralization in Cobalt Ontario.  A key takeaway from this article should be that Power Americas owns properties that have evidence of mineralization that is lower in silver but richer in cobalt, and is associated with zones hosting meaningful amounts of gold.  And, the Company has a substantially lower market cap at C$ 10 M than many of its peers in the district.

Disclosures:  The content of this article is for informational purposes only.  Readers fully understand and agree that nothing contained herein, written by Peter Epstein of Epstein Research, [ER] including, but not limited to, commentary, opinions, views, assumptions, reported facts, estimates, calculations, etc. is to be considered implicit or explicit, investment advice. Further, nothing contained herein is a recommendation or solicitation to buy or sell any security.  Mr. Epstein and [ER] are not responsible for investment actions taken by the reader.  Mr. Epstein and [ER] have never been, and are not currently, a registered or licensed financial advisor or broker/dealer, investment advisor, stockbroker, trader, money manager, compliance or legal officer, and they do not perform market making activities. Mr. Epstein and [ER] are not directly employed by any company, group, organization, party or person. Shares of Power Americas Minerals are highly speculative, not suitable for all investors. Readers understand and agree that investments in small cap stocks can result in a 100% loss of invested funds. It is assumed and agreed upon by readers that they consult with their own licensed or registered financial advisors before making investment decisions.

At the time this article was posted, Peter Epstein owned shares and/or stock options in Power Americas Minerals and the Company was an advertiser on [ER].  By virtue of ownership of the Company’s shares and it being an advertiser on [ER], Peter Epstein is biased in his views on the Company.  Readers understand and agree that they must conduct their own research, above and beyond reading this article. While the author believes he’s diligent in screening out companies that are unattractive investment opportunities, he cannot guarantee that his efforts will (or have been) successful. Mr. Epstein & [ER] are not responsible for any perceived, or actual, errors including, but not limited to, commentary, opinions, views, assumptions, reported facts & financial calculations, or for the completeness of this article. Mr. Epstein & [ER] are not expected or required to subsequently follow or cover events & news, or write about any particular company or topic. Mr. Epstein and [ER] are not experts in any company, industry sector or investment topic.