“As previously announced by Cornerstone, shareholders of the company that collectively own over 50% of the company's outstanding shares have notified Cornerstone that they will not support the terms announced by SolGold,” the Cornerstone release stated. “As a result, if SolGold proceeds to make a formal offer on these terms, the company believes that SolGold's offer would be incapable of being successfully completed.”

The Board of Directors of Cornerstone said it had assessed the SolGold proposal with its financial advisor and believes that the proposal significantly undervalues Cornerstone. The Cascabel Project is owned by SolGold's 85% owned Ecuador subsidiary Exploraciones Novomining S.A. (ENSA). The remaining 15% of ENSA is currently held by Cornerstone. In addition, Cornerstone owns approximately 9.2% of the outstanding shares of SolGold. In effect, Cornerstone has a combined direct and indirect 23% interest in the Cascabel concession. 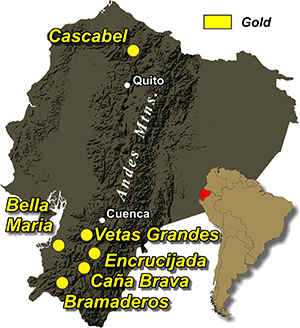 Cornerstone said it was disappointed by SolGold's latest press release, stating that it contains “numerous inaccurate and misleading statements and baseless innuendo.” Still, Cornerstone said it remains open to constructively discussing with SolGold and other potential bidders any value enhancing transaction that would garner the support of Cornerstone's shareholders.