Rockridge Resources (TSX-V: ROCK) is a fairly new mineral exploration company focused on the acquisition, exploration & development of mineral resource properties in Canada. Its focus is copper & base metals. More specifically, base, green energy & battery metals, of which copper is all three! Not just any place in Canada, world-class mining jurisdictions such as Saskatchewan. And, not just good jurisdictions, but in mining camps with significant past exploration, development or production, in close proximity to key mining infrastructure.

The company’s flagship project Knife Lake is in Saskatchewan, Canada, (ranked 3rd best mining jurisdiction in the world) in the Fraser Institute Mining Company Survey. The Project hosts the Knife Lake deposit, a near-surface, (high-grade copper) VMS copper-cobalt-gold-silver-zinc deposit open along strike and at depth. Management believes there’s strong discovery potential in and around the deposit area, and at additional targets on ~85,000 hectares of contiguous claims.

On May 7, Rockridge reported additional results from its Winter diamond drill program at its flagship Knife Lake project in Saskatchewan. Hot on the heels of last week’s press release (April 30th) of 2 holes, comes 3 more. I was planning on writing an article on those excellent results, but Equity.Guru beat me to the punch, putting out this well done piece. Readers following along may recall that the key takeaway was that holes KF19001 & KF19002 largely confirmed historical grades, intercept widths & geological conditions. Fast forward to May 7th, and management’s interpretation of drill holes KF19003, KF19004 & KF19005 was announced. Results on the remaining 7 holes will be released over the next 20-30 days. As a reminder, Rockridge has an option agreement with Eagle Plains Resources to acquire a 100% Interest in the majority of the Knife Lake Cu-Zn-Ag-Au-Co VMS deposit. 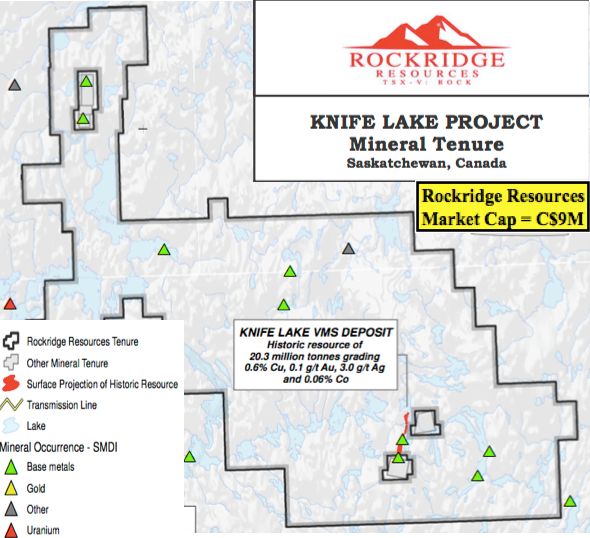 Earlier this year, Rockridge drilled 12 holes for a total of 1,053 meters. Importantly, this represents the first work on the property since 2001. Readers may recall from reading past articles & interviews on Epstein Research and Equity.Guru and viewing videos of CEO Trimble, that the company’s primary goal is to explore districts that have been under-explored, never explored, or not recently explored. Management’s highly skilled and experienced technical team & advisors deploy the latest exploration technologies & methods. A lot has changed in 18 years; a simple example would be the use of drones to fly various surveys.

Whatever management is doing seems to be working, as evidenced by 2 of the first 5 holes returning very strong results, and the third hole, KF19003 a true blockbuster.

Holes KF19004 & KF19005 were mineralized, but had narrower intercept widths of interest. Still, there were attractive Cu Eq. grades (1.25% & 1.20%, respectively). Interestingly, Gallium (up to 25.6 ppm) & Indium (up to 15.2 ppm) values were found in the mineralized zones of all 3 holes. Those 2 Rare Earth Metals trade at an average of about US$300/kg. Each 10 ppm = 1kg/tonne. KF19004 & KF19005 confirmed mineralization up-dip of historically drilled high grade mineralization. So, those 2 holes were like KF19001 & KF19002, important in building the potential resource size. All activities are advancing the Project toward a NI 43-101 compliant mineral resource estimate later this year.

Perhaps best of all, drill hole KF19003 confirmed high-grade mineralization up-dip of KF19002 in an area where no historical drilling is known to have been done. Therefore, this assay, and perhaps nearby assays to follow, will increase the size & grade of the upcoming mineral resource estimate. There were also encouraging zinc values, incl. 4m (from the 37.6m) of 1.32% Zn, nearly C$50/tonne rock. Gold values up to 0.63 g/t are interesting, but like the zinc, I’m referring to only the best grades, from smaller intercepts. That 4m interval I mentioned also had 7.54% Cu. This is clearly a COPPER deposit, Knife Lake is a near-surface, high-grade Cu project. See drill hole results from KF19001 – KF19005 below. Holes KF19001 & KF19002 were released on April 30, and KF19003-KF19005 on May 7.

Rockridge’s President & CEO, Jordan Trimble commented: “The results from drill hole KF19003, specifically 2.42% Cu Eq. over 37.6m, far exceeded our expectations and represents one of the best holes ever drilled on the project. It is important to note that this drill hole was collared in an area where no historical drilling has been reported. As such these drill results are expected to have a positive impact on the historical resource. Final results from the remaining 7 drill holes are pending and will provide steady news flow over the near term.” 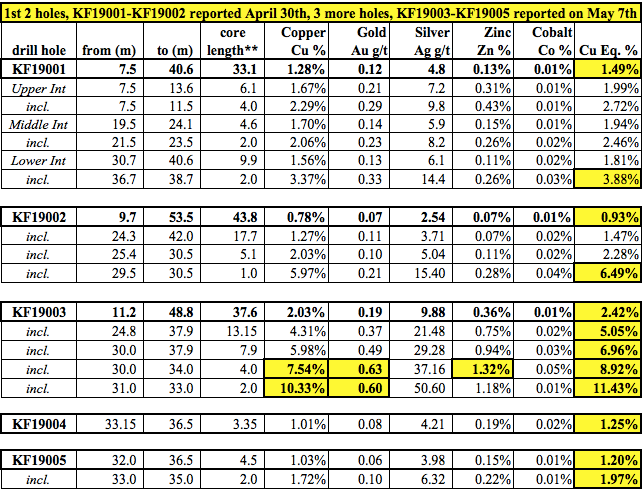 The Project is within the word famous Flin Flon-Snow Lake mining district that contains a prolific VMS base metals belt. Management paid < half a penny/lb. of copper and they believe there’s tremendous exploration upside. The goal? High-grade discoveries in a mineralized belt that could host multiple deposits, as VMS-style zones often contain clusters of mineralized zones. Of course, the trick is finding them. No modern exploration, drilling or technology has been deployed at Knife Lake. It was discovered 50 years ago and last explored in the 1990s. Airborne geophysics, regional mapping & geochemistry was done. Management believes that modern geophysics; high resolution, deep penetrating EM & drone mag surveys to cover large areas in detail, could make a big difference.

The deposit remains open at depth. Additional discoveries are very possible as the property is > 85,000 hectares in size. The winter drill program marks the end of the beginning of this highly prospective project. Importantly, the program gives the company’s technical team valuable information about geology, alteration & mineralization that will be applied to regional exploration targets. According to the press release, most of the historical work was shallow drilling in and around the deposit area. Very little regional or district work has been documented. In fact, there wasn’t even much drilling done below the deposit. That’s why management is optimistic about discovery potential both at depth and regionally. I’m excited to see what the next 7 assays add to the Rockridge Resources (TSX-V: ROCK) story!

Disclosures: The content of this article is for information only. Readers fully understand and agree that nothing contained herein, written by Peter Epstein about Rockridge Resources, including but not limited to, commentary, opinions, views, assumptions, reported facts, calculations, etc. is to be considered implicit or explicit investment advice. Nothing contained herein is a recommendation or solicitation to buy or sell any security. [ER] is not responsible under any circumstances for investment actions taken by the reader. [ER] has never been, and is not currently, a registered or licensed financial advisor or broker/dealer, investment advisor, stockbroker, trader, money manager, compliance or legal officer, and does not perform market making activities. [ER] is not directly employed by any company, group, organization, party or person. The shares of Rockridge Resources are highly speculative, not suitable for all investors. Readers understand and agree that investments in small cap stocks can result in a 100% loss of invested funds. It is assumed and agreed upon by readers that they will consult with their own licensed or registered financial advisors before making any investment decisions.

At the time this article was posted, Peter Epstein owned stock in Rockridge Resources and the Company was an advertiser on [ER]. Readers understand and agree that they must conduct their own due diligence above and beyond reading this article. While the author believes he’s diligent in screening out companies that, for any reasons whatsoever, are unattractive investment opportunities, he cannot guarantee that his efforts will (or have been) successful. [ER] is not responsible for any perceived, or actual, errors including, but not limited to, commentary, opinions, views, assumptions, reported facts & financial calculations, or for the completeness of this article or future content. [ER] is not expected or required to subsequently follow or cover events & news, or write about any particular company or topic. [ER] is not an expert in any company, industry sector or investment topic.