“Millennial is pleased to have received four mining licenses which comprise ~97% of the property area at Pastos Grandes. Millennial expects the final license to be granted in the near future. The company continues to actively advance its three-tonne-per-month lithium carbonate plant & pilot evaporation ponds. Millennial is moving forward with financing, off-take and other key strategic initiatives with large industry players.”

This news comes on the heels of the October announcement that the National Mining Secretary of Argentina granted a Federal Fiscal Stability Certificate (“FFSC“) for Pastos Grandes. The Certificate outlines the tax regime, plus additional benefits bestowed on the Project, and officially confirms a reduction in the corporate income tax rate from 30% to 25%. 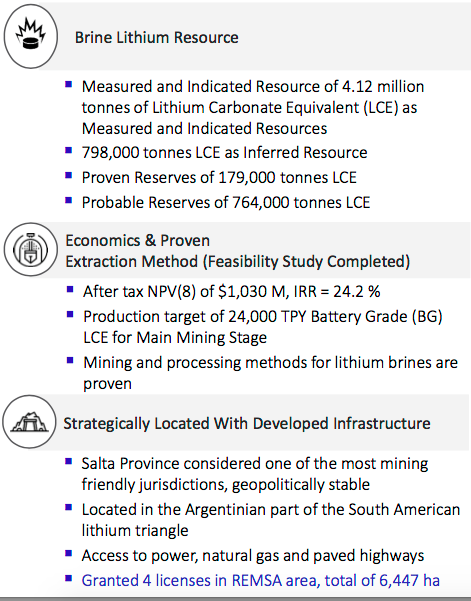 “The granting of the FFSC assures the tax & additional benefit terms under which we can operate a lithium carbonate production operation. Receipt of the FFSC confirms our confidence that mining projects in Salta have the support of all levels of government.”

At a time when many lithium brine projects in Chile & Argentina are moving very slowly — (or are stalled) — it’s clear that Millennial’s management team is working closely with all stakeholders to successfully advance Pastos Grandes.

Unlike most peers, Millennial has been blessed with ample cash liquidity. Even today it’s sitting on ~$23 million, enough to last well into 2021 if necessary. 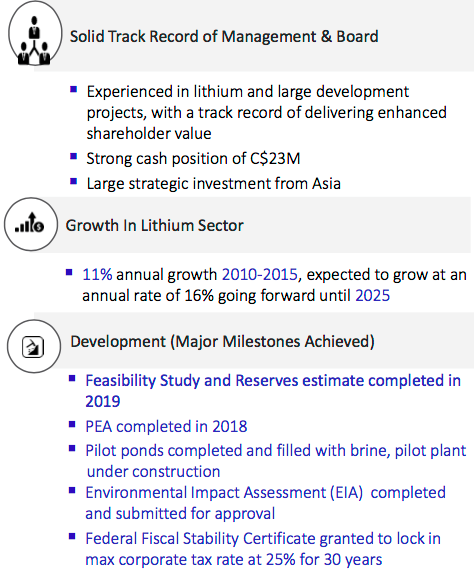 Chile’s Albemarle & SQM, and Argentina’s Livent, Orocobre, Galaxy & Lithium Americas are public companies. Problems with ponds or processing facilities at those companies will become known to Millennial’s technical team. Therefore, there’s a decent chance that mishaps at other projects can be avoided. Sometimes there are benefits to not being a first mover. 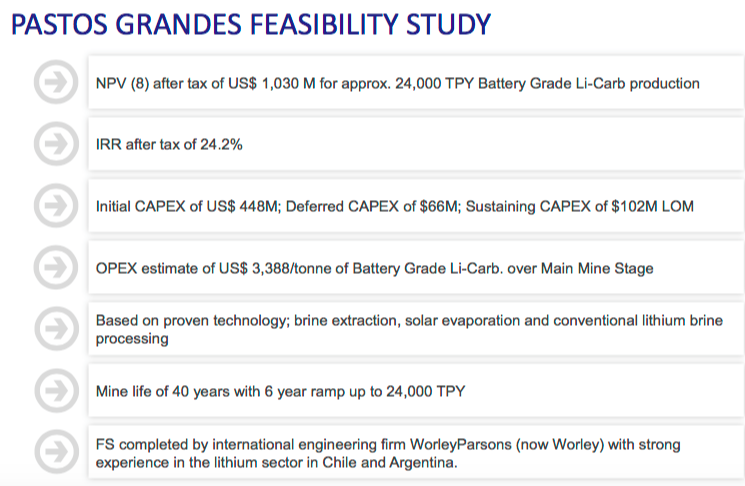 Readers should not take for granted the fact that Millennial owns 100% of its project. By contrast, Advantage Lithium owns 75% of its flagship project, Argosy Minerals owns 77.5%, Lithium Americas, 50% and Orocobre Ltd., 66.5% of their respective projects.

Owning 100% of Pastos Grandes, with a BFS & Fiscal Stability pact in place, greatly enhances management’s ability to fund construction. Selling a meaningful portion of the project could raise a substantial amount of capital. That, combined with debt financing and (possible) advance payments from off-take agreements, would minimize the need for excessive equity capital.

In speaking with CEO Farhad Abasov, he and his Board believe that news on one or more parts of a funding package could come within 3-6 months. Management is speaking with global industrial companies, some of which have already done substantial due diligence.

A few interested parties would like to see a staged ramp-up to minimize cap-ex. So, instead of moving to 24,000 tonnes LCE/yr. by 2025-26, getting to 10,000 tonnes and remaining at that level — only expanding if/when market conditions warrant. In that scenario, cap-ex could be reduced from US$448.2 million to under US$300 million. Then, operating cash flow could be deployed to partially fund an expansion from 10,000 to 24,000 tonnes at a later date.

Also, a few prospective partners have lithium extraction / processing technologies, or access to technologies, that (if they work at commercial-scale) could further optimize Millennial’s operating flow sheet, potentially enhancing project economics. In some cases, the need for evaporation ponds would be eliminated. 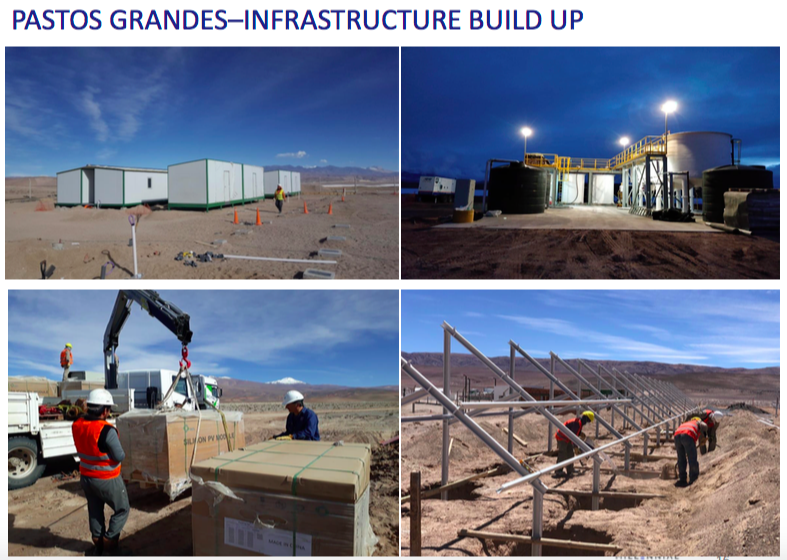 Giant auto & battery manufacturers can very comfortably afford to fund projects like Millennial’s with cap-ex requirements of around half a billion USD$. Although we haven’t seen much of that yet, it’s coming. Look no further than Benchmark Mineral Intelligence’s running tally of lithium-ion battery mega-factories.

Benchmark Mineral Intelligence has been tracking the number of global mega-factories for years. The number has soared, currently standing at 115.

Ranked by size, the top 10 global automakers; Volkswagen, Daimler, Toyota, Ford, BMW, GM, Hyundai, Tesla, Honda & Ferrari have an average EV of about US$135 billion. Any of these companies could fund even the largest lithium projects in the world. Yet, I estimate that fewer than ten new projects, brine, hard rock or clay-hosted, (>20,000 tonnes LCE/yr.) are likely coming online by 2025.

One of the main reasons for such negative sentiment in the lithium junior space has been the decline in lithium prices from unsustainably high levels above US$20,000 / tonne. However, now below US$10,000 / tonne, prices may have overshot to the downside. Many analysts & pundits believe that 2020 or 2021 will mark a bottom in the three-year slide in prices. 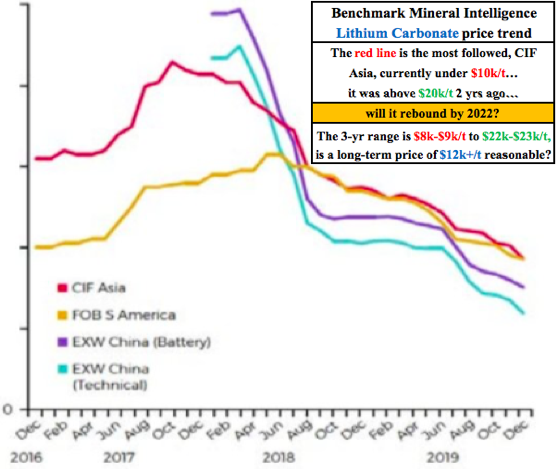 In the chart below, Roskill demonstrates why prices are likely to improve. At current spot levels, all advanced-stage hard rock & brine projects in the pipeline come in at under a 16% IRR. Some projects have negative IRRs; the average is closer to 5% than 10%.

Millennial is poised for a great decade, and the 2030s could be even better. Management expects Pastos Grandes to be next in line in Argentina after Lithium Americas / Ganfeng. Any project, anywhere in the world, that comes to market and ramps up over the next five years should enjoy strong demand for its lithium offerings.

A major global supply source (about 1/3 of the market) is experiencing unexpected bottlenecks, uncertainty & delays. In Chile’s Atacama salar, both Albemarle & SQM had planned massive expansions to lithium carbonate production, upwards of a tripling from 2018 to 2021. Two years into these expansions, annual production has hardly budged.

More uncertainty and caution is expected as local communities have convinced a Chilean environmental court to uphold claims of excessive water use by SQM & Albemarle, seriously threatening their expansion plans. Therefore, this news should be supportive of lithium prices in the mid-to-longer term.

Millennial Lithium has an excellent asset, more advanced (BFS-stage) than all but 2 or 3 global brine projects, with relatively low upfront cap-ex compared to other mining & metals projects. Producing a metal with expected annual demand growth of 15% (or more) over the next 10 years. Millennial has over $20 million in cash on its balance sheet.

Not many significant projects could possibly commence production by 2022. Not many at all, besides Lithium Americas & Galaxy. No new operations are coming in Chile in the next 3-5 years, a small handful in North America, (Bacanora, Standard Lithium). If lithium demand really takes off, few companies on the planet are better positioned to capture that need than Millennial Lithium.

Adjusted for ownership interests in their respective flagship projects, all but Lithium Americas trade at similar valuations. Any of these companies that successfully advance towards production [secure cornerstone investor(s), off-take agreement(s), commencement of construction, etc.] offer the potential for significant share price gains. Notice that Lithium Americas’ valuation is about four times that of the others.

Millennial is trading at just one-fourth the valuation, but could be only 12-18 months behind Lithium Americas. Is this 75% discount warranted? Lithium Americas is fully-funded on its 50% JV project and construction is well underway. Millennial owns 100% of its project, has ample cash liquidity, no debt, a BFS, 4 of 5 mining licenses have been granted and has secured a signed Federal Fiscal Stability Certificate.

If one believes like I do that lithium prices will rebound, Millennial Lithium (TSX-V: ML) / (OTCQX: MLNLF) could be an excellent way to benefit from the rebound.

Disclosures: The content of this interview is for information only. Readers fully understand and agree that nothing contained herein, written by Peter Epstein of Epstein Research [ER], (together, [ER]) about Millennial Lithium., including but not limited to, commentary, opinions, views, assumptions, reported facts, calculations, etc. is not to be considered implicit or explicit investment advice. Nothing contained herein is a recommendation or solicitation to buy or sell any security. [ER] is not responsible under any circumstances for investment actions taken by the reader. [ER] has never been, and is not currently, a registered or licensed financial advisor or broker/dealer, investment advisor, stockbroker, trader, money manager, compliance or legal officer, and does not perform market making activities. [ER] is not directly employed by any company, group, organization, party or person. The shares of Millennial Lithium are highly speculative, not suitable for all investors. Readers understand and agree that investments in small cap stocks can result in a 100% loss of invested funds. It is assumed and agreed upon by readers that they will consult with their own licensed or registered financial advisors before making any investment decisions.