WOW. What a three months it’s been. Things appear to be relatively better now, but I was very worried. At its worst, four major U.S. stock market indexes were down an average of 37.5% from all-time highs set in February. I feared stocks would keep falling and that copper might trade under US$1.50/lb. for a long, long time. Luckily, that scenario did not play out.

I don’t know if we’re out of the woods yet, but copper is up nearly 20% from its March low. Perhaps analysts realizing that long-term demand for EVs has remained intact breathed some life back into Dr. Copper? Look no further than Tesla’s sky-high valuation (US$190 billion) for proof of concept!

Silver, although trailing behind gold, is up, so no worries there. I never claim to have any keen insights on commodity prices, but this time may be different. So much new debt and money printing, with no end in sight…. So much uncertainty from COVID-19…. Precious metals are in a bull market that could be epic & long-lasting. Silver frequently outperforms gold in bull markets, that means there’s a lot of catching up to do. 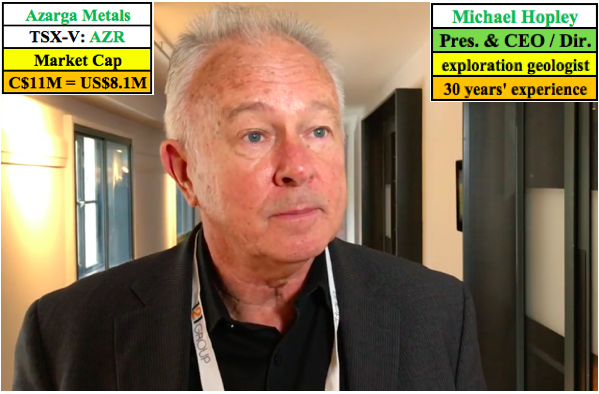 With this in mind, I revisited my favorite Russian copper-silver play Azarga Metals (TSX-V: AZR) by interviewing its President & CEO Michael Hopley. We had a wide-ranging conversation in which a key takeaway is that, A LOT IS HAPPENING at the company!

Impressive drill results & favorable metallurgical testing data was released, and a new resource will be out in a few weeks. If the resource estimate is strong, management might commission an optimized PEA. Mr. Hopley could not tell me much regarding the parameters, but in a prior press release management stated that its mineralized strike length had increased from 3.4 to 6.5 km (+91%), and that the overall grade has not changed much.

The current resource is 62M tonnes. Given a 91% strike extension, I would not be surprised to see 90M or 100M tonnes, which could result in an Indicated & Inferred resource approaching two billion copper equiv. pounds. Several near-term catalysts could be impactful and the Company is well funded. Please continue reading to learn more about Azarga Metals and its investment thesis.

Michael, please tell us how you landed as CEO of Azarga Metals. 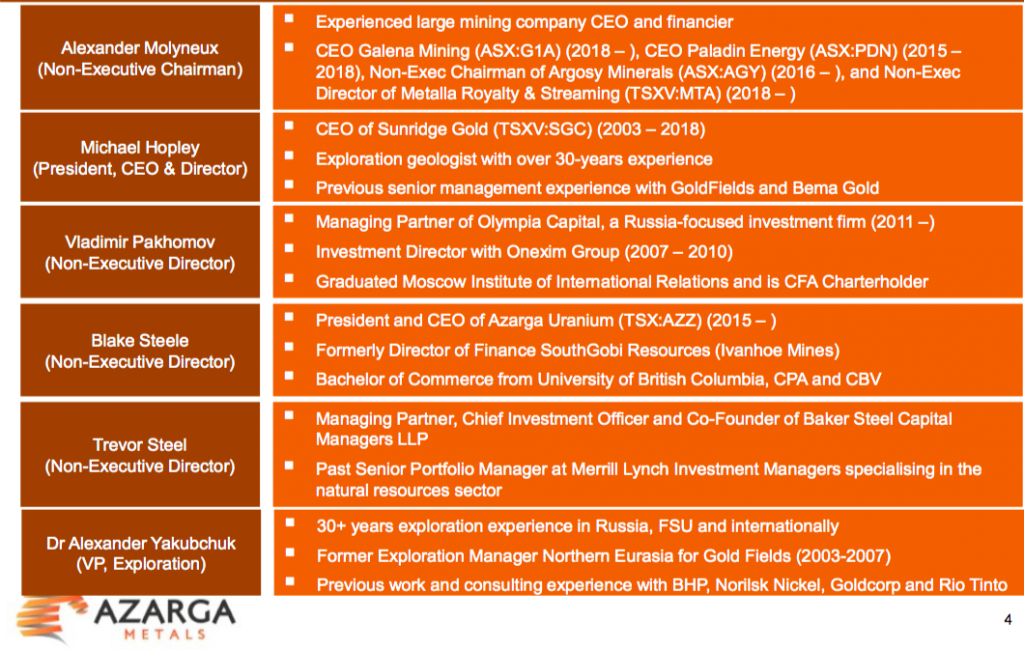 For almost 20 years I’ve been part of management or on the Board of predecessor companies to Azarga Metals. The Company acquired its flagship Unkur property in 2016 and successfully explored it later that year and in 2017-18. However, due to perceived geopolitical risks, and a difficult funding environment, the project has not advanced as rapidly as we would have liked.

Since 2018, management has turned over, our new team (see team bios above) is very well suited for the specific tasks at hand. When we received a significant financing package from Baker Steel early last year, I was invited to come out of retirement to be President & CEO. As a director it was obvious to me that Unkur had serious potential to be a world-class copper-silver project, so I accepted.

Yes, Unkur is located in eastern Russia (Siberia), ~400 km north of the Chinese border. China is by far the largest consumer of copper & silver. My team believes that Unkur hosts a discovery of global significance, with district-scale potential. It’s ~35 km from the giant Udokan copper project that reportedly contains > 55 billion pounds of copper. The geological setting & possible scale of our project is similar to Udokan. Russian company Baikal Mining is building it and it’s scheduled to start production in 2022.

On April 9th, Azarga Metals announced drill results. Two assays stood out. The best had a 22-m interval of 0.74% Cu & 55 g/t Ag. What do these results mean for the Unkur story?

This exciting result was from drill hole AM19-005, an in-fill hole drilled to test a higher-grade area north of our current resource. The intercept extended our high-grade envelope further north and deeper compared to the model we used to estimate our existing resource. Select recent drill results over a 6.5 km strike length (shown below), are encouraging, especially as the project remains open in both directions along strike, and at depth.

As a frame of reference, the 22-m interval you mentioned equates to ~US$74/t (C$100/t) in-situ value. And, that intercept included a shorter interval of 9 m of 1.34% Cu + 99.4 g/t Ag, an in-situ value of C$181/t. To be clear, those two values are not indicative of the overall deposit. Still, if our metallurgy holds up, C$71/t rock (before recoveries) could be economic under the conditions, the right mine plan. 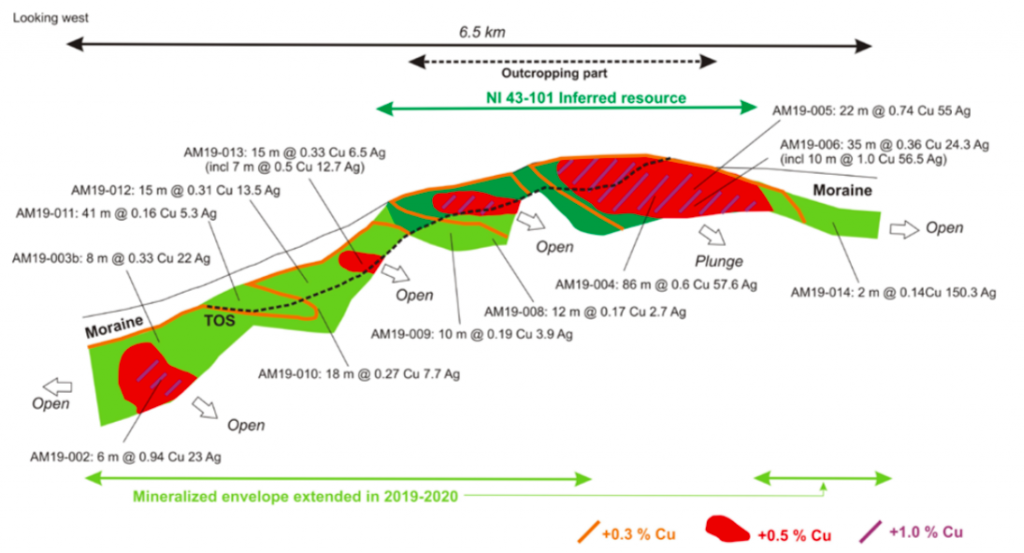 Speaking of metallurgy, please explain your latest results on that front.

Good question, this is important news. Previous metallurgical tests used only oxidized material from a surface outcrop. These new tests were on both oxidized & sulphide material taken from deeper parts of the Unkur deposit. Recoveries were up to 92% Cu and up to 88% Ag in our sulphide material, using conventional flotation.

The oxide results were as high as 96.4% Cu in an acid leach and up to 96.7% silver in a cyanide leach. Importantly, we think that a standard 30% Cu concentrate will be achievable, making it easy to sell to refiners. We believe this was a good outcome, especially for preliminary-stage testing. We think there’s a reasonable chance that we could use heap leaching to treat our oxide material.

Over the past several years it has been difficult for junior exploration companies to raise cash. Baker Steel took the view that among hundreds of risky companies destined for failure, there will always be some with projects of considerable merit. Azarg’s Unkur project stood out to them, a true vote of confidence.

Mineralization at Unkur has been drilled to ~350 meters’ depth, but remains open at depth and in both directions along strike. A new resource estimate by SRK is coming out in 2 or 3 weeks. While I can’t say what that new resource might look like, I can reiterate what we said in a May 11th press release, namely that recent drilling had extended the mineralized strike length by 90% from 3.4 to 6.5 km.

Your 2018 PEA delivered promising financial metrics. Might Azarga be able to extend the 8-yr. mine life?

Yes, the existing PEA contemplates mining ~25% of our existing resource, or meaningfully less than 25% of our new resource estimate. We’re looking to announce a significant increase in the resource size in the next 2 or 3 weeks. If the resource expansion is strong, then we would look to extend the mine life.

Instead of an 8-year mine life with throughput of 2.0M tonnes/yr., perhaps we could increase it to 3.0M or 3.5M tonnes/yr. and extend mine life by a few years. I’m not saying we can get there from our upcoming resource update alone, we have to study the new numbers. But, if we can increase annual production, and possibly extend mine life, without a major increase in cap-ex, the impact on NPV, IRR & payback period could be quite favorable.

What are the biggest risk factors of the Azarga story?

Aside from metals’ pricing, there are two primary concerns. Increased political tensions between Russia and the west, and the speed at which the world’s use / investment in copper & silver returns to normal after the impact of COVID-19.

I find it encouraging that the Cu price fell to ~US$2.10/lb. in mid-March, but has since recovered to ~US2.56/lb. Global automakers seem to have maintained fairly aggressive Electric Vehicle rollout plans, a promising sign for copper demand. Due to its industrial + investment / safe-haven attraction, silver futures touched US$11.80/oz., but have since rebounded to US$17.70/oz. (+50%).

Azarga is one of the few juniors that’s well funded. We’re able to move the Unkur project forward with drill results, metallurgical testing, a new resource calculation in coming weeks and hopefully a new PEA in 6-9 months.

Our Chairman Alex Molyneux is based in Asia and is well connected. He’s also highly experienced in investment finance / M&A. Russian investors, as well as global sovereign wealth funds, are looking to diversify away from oil, gas & coal. Silver, and especially copper, are critical, green energy, high-tech metals of the future.

Thank you Michael for this timely update. I can honestly report that few other metals & mining juniors are doing much during this pandemic. I look forward to seeing your updated resource estimate in coming weeks.

Disclosures: The content of this article is for information only. Readers fully understand and agree that nothing contained herein, written by Peter Epstein of Epstein Research [ER], (together, [ER]) about Azarga Metals, including but not limited to, commentary, opinions, views, assumptions, reported facts, calculations, etc. is not to be considered implicit or explicit investment advice. Nothing herein is a recommendation or solicitation to buy or sell any security. [ER] is not responsible under any circumstances for investment actions taken by the reader. [ER] has never been, and is not currently, a registered or licensed financial advisor or broker/dealer, investment advisor, stockbroker, trader, money manager, compliance or legal officer, and does not perform market making activities. [ER] is not directly employed by any company, group, organization, party or person. The shares of Azarga Metals are highly speculative, not suitable for all investors. Readers understand and agree that investments in small cap stocks can result in a 100% loss of invested funds. It is assumed and agreed upon by readers that they will consult with their own licensed or registered financial advisors before making any investment decisions.

At the time this article was posted, Azarga Metals was an advertiser on [ER] and Peter Epstein owned shares in the Company.