Golden Tag has been preparing for stronger silver prices since 2019 in order to follow up on a resource outlined by a 2013 resource estimate. A new team at Golden Tag is accelerating its plans to appreciate and expand the large silver-zinc-lead deposit left lying in the desert for seven years.

The company recently announced a $5.6-million financing with Eric Sprott, his third financing in the company in under a year, in order to grow and define the known resources.

The San Diego Silver Project is located in the Velardeña Mining District in the Mexican State of Durango. The 92-hectare property lies 75 kilometres southwest of the city Torreon in sight of Golden Minerals (TSX: AUMN) San Juana Mine and 14 kilometres from Peñoles’ (BMV: PE & OLES) Santa Maria Mine.

A 2013 resource estimate concluded that there is potential to increase the size of the resource. The mineralization at the property is hinting at something bigger at depth and the company has sought the guidance of a geologist who has a knack for discovery at depth.

After seven years, the story of the San Diego Silver project continues, but with every good story, it is best to revisit the beginning.

Golden Tag acquired an established resource of 115 million ounces of silver and 1.5 billion pounds of zinc. There are two primary types of silver-lead-zinc mineralization at San Diego: veins and bulk zones.

Drilling in 2011 and 2012 revealed widening vein zones below 500 metres, in some cases to more than 20 metres. This drilling also identified broader mineralized zones.

The 2013 resource estimate was completed by SGS using 59 drill holes amounting to 32,96 metres and reported over 115 million ounces of silver and 1.5 billion pounds of zinc in the resource estimate.

In addition to having a historical resource in place, San Diego already has estimated recovery rates. Most juniors do not complete these types of studies but it was roughly calculated using assumptions from the Valaradeña mine 12 kilometres away.

These recoveries are not representative of the geology at the San Diego site. Every poly-metallic operation is unique and any metallurgical work should be tailored to the specific project. Golden Tag could reconsider these recoveries as more drill core comes out of the ground.

After the 2013 Resource the company was put on care and maintenance, and not another drill program was proposed until 2019.

In September of 2019, Chad Williams became chairman of the board. Mr. Williams is the founder of Red Cloud Klondike Strike, a brokerage specializing in the junior mining sector. It was only nine days later that the company raised $1.5-million with participation from Eric Sprott.

The company then signed a five-year agreement with Ejudi San Diego, a Mexican communal governance committee, to conduct exploration work at San Diego.

The company completed an environmental impact assessment and filed an application for a permit with Mexico’s environmental agency, SEMARNAT, to drill up to 21 holes. The permit was approved on March 13, 2020 and granted two and a half years to complete the work.

The company has built a strong foundation on past results and since September 2019 it has seen its share price rise.

The story of San Diego is restarting and drill results are just around the corner. Golden Tag Resources is fully permitted, fully funded with a proven resource ready for more exploration, and should be finally appreciated.

An initial 2,000-meter drill program comprising eight holes has been planned to test the near-surface continuity of mineralization encountered during prior drill programs in two target areas, the Trovador and Arroyo zones. However, the improved market conditions and increased financing should support a larger exploration program.

One key appointment that will help provide exploration insight is David Rigg. Mr. Rigg was the former President of Alexis Minerals now QMX Gold Corp. (TSX-V: QMX) and Exploration Manager for Agnico Eagle (TSX: AEM). He contributed to the discovery of the Musselwhite Mine in Ontario, Goldex, LaRonde and Lac Herbin Mines in Québec and was part of the original San Diego Deposit in Mexico.

According to the 2013 resource estimate by SGS Canada - resources could potentially be expanded by 20 to 50 million tonnes grading from 100 to 150 g/t Aq.Eq. from existing structures, as well as lateral and depth extensions.

The bulk of the resources in the mineral resource estimate come from the Fernandez zone, showing room to add significant ounces but there are other targets on the property that show the potential for high grade headline results.

There are four primary zones that show the greatest potential and make the most sense as exploration targets on the San Diego Property. 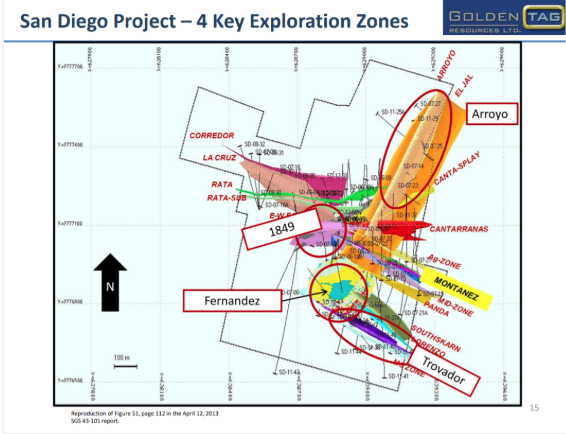 The Fernandez Zone offers a way to add more ounces to the resource. Drill results indicate bulk mining potential and it opens up to the west, which needs to be defined with more exploration. 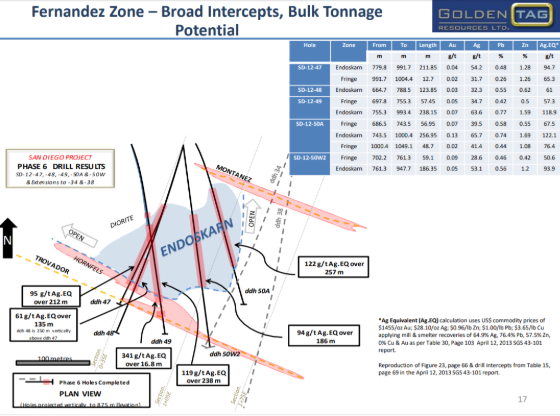 The top of this was interpreted by SGS in 2013 at a vertical depth of 450 meters below surface, but no drilling has been conducted in this area to verify the upward extent of the zone. As a result, potential exists in extending known mineralization in the zone upwards from the interpreted 450 m vertical depth towards the surface.

This zone represents the core value underlying the San Diego Property. The authors of the 2013 Resource Estimate recommended that a Preliminary Economic Assessment "PEA" be completed to measure the economic impact along with the higher grade veins.

The Trovador Zone target lies in a 400 x 400 meter area between indicated resources located 150 metres below surface close to the historical workings, and above inferred resources estimated in 2013 at depth. 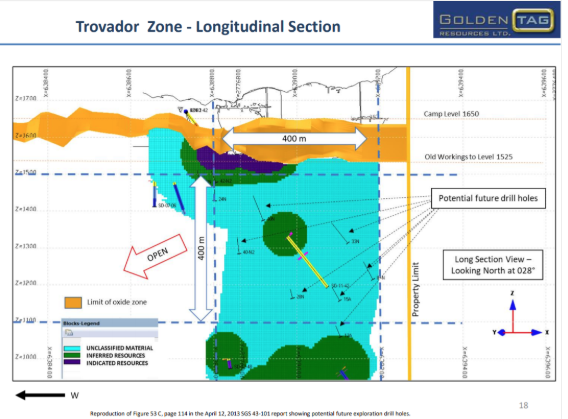 Potential exists to test this zone over 400 meters, down to a vertical range of 400 meters through drilling targeted between the historical mine workings at the 1525 Level and the inferred resources estimated by SGS in 2013 at 1100 Level, 550 m below surface.

There is a large amount of material defined as unclassified which typically means there is evidence of mineralization but there has not been sufficient work to make it compliant with modern reporting standards.

The 1849 Target lies at the intersection of the East-West Fault Zone and Western Contact Zone. The target area lies within the 250 vertical meters between holes SD-12-49 and SD-07-18 and along the 350 meter up-dip extension to the surface. Further drilling will be required to confirm the potential for a "chimney" type structure at the intersection of these two sub-vertical zones.

Discovered in 2007 in hole SD-07-27 (166 g/t Ag over 4.60 m, including 776 g/t Ag over 0.6 m with 1.55% Cu), the Arroyo Zone has been traced over a strike length of 525 meters from the surface to shallow depths with few, widely spaced drill holes from previous programs. It contains near surface, higher-grade Ag dominant oxide and sulfide mineralization. The presence of this oxide zone right below surface should be further tested.

Golden Tag Resources Ltd. is a junior exploration company exploring for high-grade silver deposits. The Company holds a 100% interest, subject to a 2% NSR, in the San Diego property in Durango State, Mexico. The San Diego property is located within the prolific Velardeña Mining District, the site of several mines having produced silver, zinc, lead, and gold over the past century. For more information regarding the San Diego property please visit our website at www.goldentag.ca. Golden Tag has no debt and cash balances of approximately $2.1 million.

*The author of this article was compensated for the creation of this article in cash, no options. The author picked up shares in the public market, ranging from prices of 29 cents to 30 cents on July 30, 2020. This article is meant to serve informational and marketing purposes only and not a technical report and does not constitute a buy recommendation. As always, please do your own diligence.