With execution of the Wheaton stream anticipated in the next couple of weeks, Caldas Gold will be fully funded to expand Caldas’ mining operations into the Marmato Deep Zone “MDZ”, massively increasing the gold and silver production profile of the Marmato mine.

The Marmato mine is located in the Department of Caldas, in the middle cauca belt that also is home to Zijin’s Buritica Gold Mine.

The Marmato Project: Expansion at Depth

The Marmato mine has been in operation since 1991 and has produced an average of ~24,000 ounces of gold annually over the last 10 years with 25,750 ounces of gold in 2019. However, exploration revealed there is more at depth to continue mining at depth to dramatically increase gold and silver production.

Acquired in 2011 with Gran Colombia’s merger with Medoro, the Marmato Project now will stand on its own as a spin-out of Gran Colombia Gold (TSX: GCM) in February 2020. Gran Colombia maintains a 57.5% equity interest in the company. In a telephone call, Serafino Iacono, president of Caldas, commented on the logic behind the new company.

“We decided to create a new company, mostly because of the history of Gran Colombia, we managed to have a large debt and bring it down. what we did not want to do was load Gran Colombia with a debt of $265 million to build out Marmato. I would rather own 60% of the project, then to go back to a company with debt. We now have a nice clean company, still own the project but without the debt, by losing 40% equity.”

According to the company’s most recent resource estai, Marmato hosts 6.6 million ounces of gold defined in the Zona Baja and exploration drilling is continuing to upgrade and expand the Deep Zone mineralization. The bulk of the resource estimate, 4,086,000 ounces, lies in the measured and indicated category with 2,172,000 ounces of gold in the inferred.

A Prefeasibility Study “PFS” confirmed the economic viability of the underground expansion of the Marmato project. At a gold price of $1,400 (USD) per ounce, total life-of-mine “LoM” undiscounted after-tax free cash flow from mining operations amounts to $770-million (USD).

At a 5-per-cent discount rate, the net present value of the total life of mine after-tax project cash flow amounts to $263.9-million (USD). Before financing, the project has a 20.1-per-cent after-tax internal rate of return and payback by 2026.

The company plans to improve and augment current mining operations over the next two years by focusing on two distinct zones in the Zona Baja, the Upper Zone and MDZ. 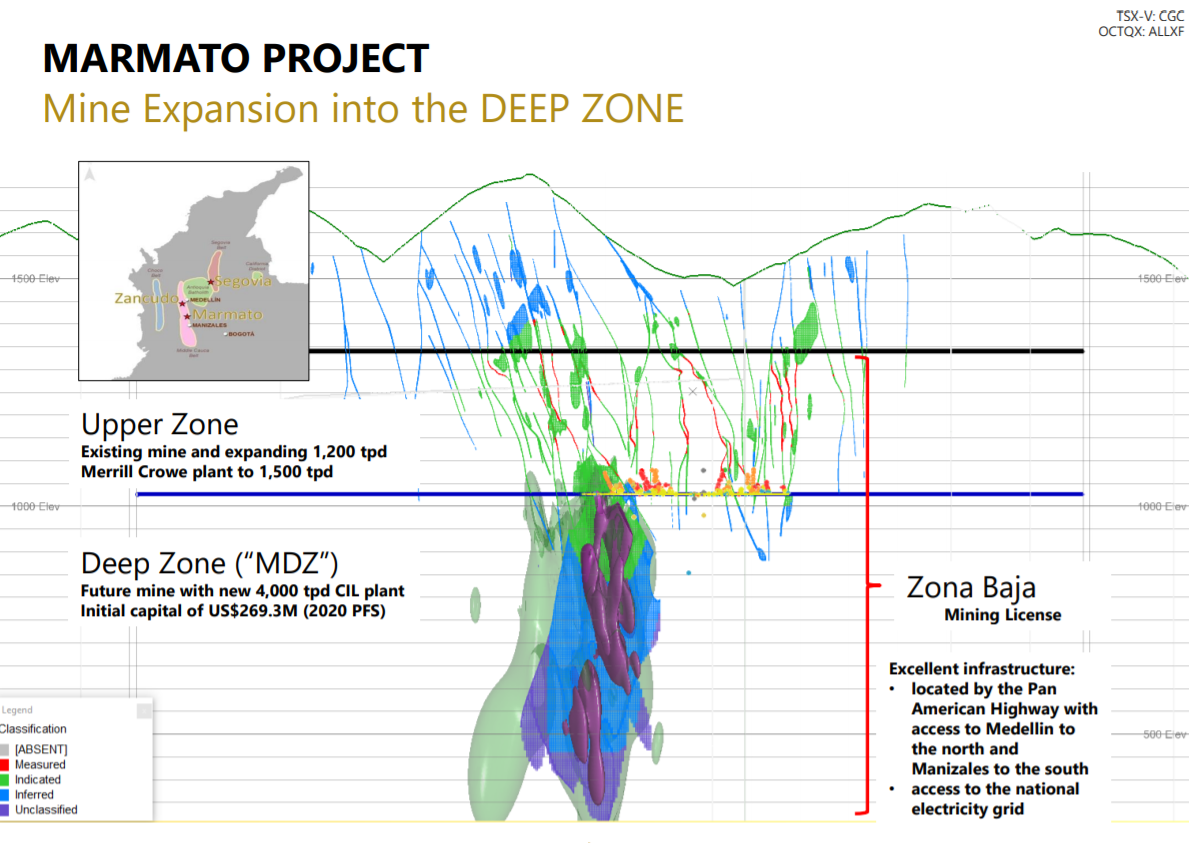 The production profile will ensure the Marmato mine will continue to contribute to the local economy.

Caldas Gold’s investment in Marmato will increase direct and indirect local jobs to 2,700 and add 900 construction jobs over the next three years in the Department of Caldas, Colombia.

Giving Orphans a Home: Exploration Potential North of the Border

The spin-out from Gran Colombia created a new company to give Marmato its own sparkle as its own company. Management is looking to further develop under appreciated assets that shine in their own right.

The private company has an agreement to acquire the project from a Pan American Silver (TSX: PAAS; NYSE: PAAS) subsidiary Lake Shore Gold. Also part of the deal is a 25-per-cent interest in the Knight Joint Venture with Lake Shore, adjacent to Juby.

SARC will receive 20 million Caldas shares, and Caldas will also make the final payments on the projects to Lake Shore. Lake Shore is owed US$9.5 million to secure the 100-per-cent interest in Juby, with another US$500,000 required to close the Knight JV interest.

The project is located in the heart of a project in Ontario’s Abitibi greenstone belt 100 kilometres southeast of Timmins near the old Kerr-Addison Mine.

When asked in telephone call about the reason behind the acquisition in Ontario, Iacono of Caldas stated:

“We were orphans for years, Marmato was an orphan project, we started looking at the Juby project because it was an orphan, we convinced them instead of a publicly listed company, still in Canada, Ontario, 8 hours from Toronto, Ontario. It is all about  location, location, we believe that is has big potential, it is one of these projects, it is the last project on the last, it is a progression of a companies that own it, it never got the right attention, this is the perfect project, we are very knowledgeable about the project and hope to upgrade it to a development project by 2021.”

Caldas Gold also owns 100% of the Juby Project, an advanced exploration-stage gold project located within the Shining Tree area in the southern part of the Abitibi greenstone belt about 100 kilometres south-southeast of the Timmins gold camp.