First Cobalt Corp., substantial cash flow from cobalt refinery by late 2022
Note: unless indicated otherwise, all figures in US$.

This week’s news from Pfizer Inc. about a COVID-19 vaccine that’s (potentially) > 90% effective in preventing the virus is very bullish for the global economy. Stock markets around the world soared on the day of the announcement.
In the second half of 2021, global economic activity (GDP) could be back up to within 5% of pre-COVID-19 levels, helped in large part by massive fiscal stimulus packages.

As a result, sales have held up remarkably well. Global EV sales in September were up 91%, now accounting for roughly 1 in 20 new car sales. Chinese sales of EVs are growing even faster, expected to reach 1 in 5 by 2026. Chinese EV sales alone virtually assure strong demand for battery metals. Yet, Tesla is building new car, truck and battery operating facilities that by 2030 would reportedly require more lithium than the world’s entire (current) lithium production capacity.

By contrast, there are very few high-quality cobalt juniors. First Cobalt Corp. (TSX-V: FCC) / (OTCQX: FTSSF) might be the ONLY pure-play cobalt investment opportunity on the planet — with cobalt assets outside of Africa and China — cash flow starting in < 2 years, a market cap of > $10M and a primary stock listing in N. America.

Both lithium & cobalt prices at or near 3-yr+ bottoms

I see no way in which First Cobalt’s share price would not move higher if cobalt prices rebound from current low levels. Battery metal experts like Benchmark Mineral Intelligence, Roskill, Adamas Intelligence, CRU, Wood Mackenzie, forecast a meaningful increase in the cobalt price by the mid-2020s from today’s level of ~$15.5/lb.

For example, Benchmark expects the price to rise steadily to ~$36/lb. in 2028, before falling to a long-term price assumption of $26.8/lb. from 2030 on. If the cobalt price does end up soaring, I think that First Cobalt’s valuation would rise even more.

Refurbishing & expanding First Cobalt’s refinery is underway and is expected to cost $60M. A substantial portion of this figure is expected to come from loans issued by a shortlisted group of 3-4 institutional investors. Some of the capital needed could come from Canadian government agencies / investment groups, possibly including grant(s). 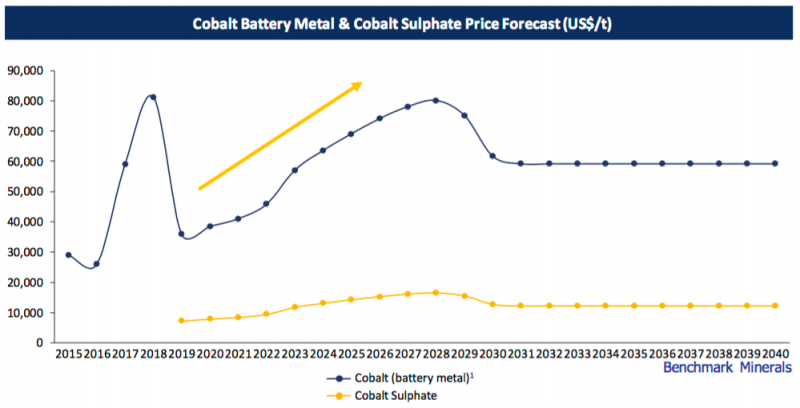 Depending on how financing plans progress, I estimate that First Cobalt might need to come up with a total of $5-$15M in non-debt capital over the next 18-24 months. Some of that cash could come from the disposition of cobalt assets in Idaho (USA), or more likely from the sale of cobalt/silver properties in Ontario.

To be clear, there’s no immediate need for capital, and the maturity of the Company’s $5M loan from Glencore was recently extended until August 2022.

On November 10th, First Cobalt Corp. delivered an update on commercial contracts & metallurgical test work relating to its 100%-owned, permitted cobalt refinery in Ontario, Canada. Since August of 2019, Glencore plc has been assisting in the refurbishment of the refinery. According to the press release,

“First Cobalt and Glencore have agreed to discuss a long-term feed purchase contract rather than the tolling arrangement originally contemplated, providing First Cobalt greater leverage to the cobalt market by entering into offtake contracts with end users directly.”

“The change in approach towards feed purchase contracts results in greater exposure to the cobalt market and potentially a greater share of project economics. With the decision to be a market purchaser of feedstock, rather than a toll refiner, the Company has resumed discussions with lenders and intends to move aggressively to advance its strategy. I am very appreciative of Glencore’s ongoing support and look forward to working towards completing a mutually agreeable cobalt hydroxide supply agreement for our refinery.” 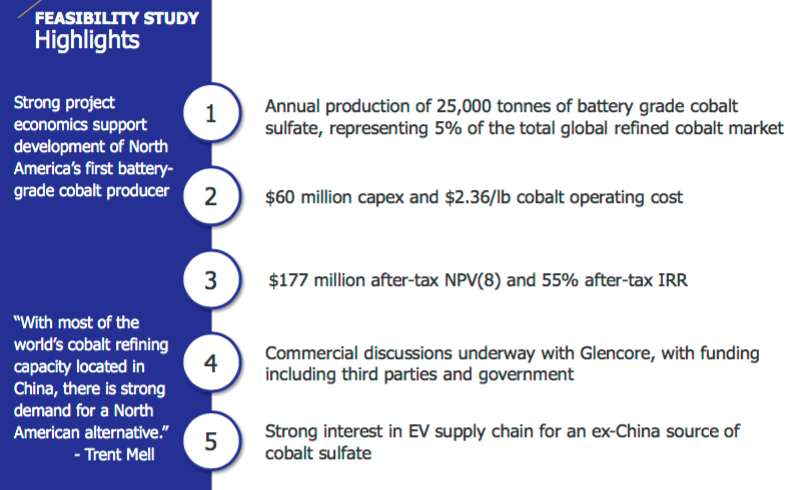 Bench-scale testing of cobalt hydroxide feedstock from Glencore yielded recoveries above 97%, significantly higher than the 93% assumption in the Company’s May 2020 engineering study.

Reading between the lines of this important press release

A source of comfort for some, and concern for others, has been Glencore’s major backing of First Cobalt’s refinery. Last year Glencore provided a huge vote of confidence in the asset. At the same time, some investors wondered if Glencore would have too much power over the refinery’s operations & economics.

However, in this week’s press release we learn that Glencore is stepping back a bit, allowing First Cobalt to take on more risk, but also more potential return. Glencore will not hold the lion’s share of the debt, instead debt will be spread among 2-4 institutional investors.

Glencore is no longer on the hook to provide up to 100% of the refinery’s feedstock. That requirement will now be prudently spread across a number of producers able to consistently supply ethically-sourced cobalt hydroxide. Finally, First Cobalt will control its cobalt off-take because it will be taking possession of the feedstock (not merely toll-milling it for others).

Albeit with more risk, First Cobalt could receive 2x the cash flow…. 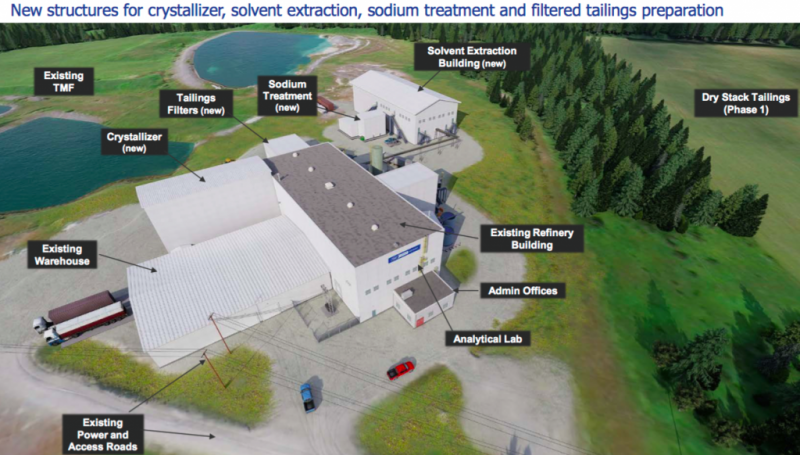 Make no mistake, these developments add significant logistical considerations and risks for CEO Trent Mell and his team. For instance, the Company will have much larger working capital needs if it has to buy its own feedstock.

Working with multiple industry players diversifies some risk, but will likely introduce other risks. Few companies have the financial resources of Glencore. However, if the pieces of the puzzle come together in 2022, shareholders will retain a much greater share of the economics.

Readers may recall that at the project-level, annual pre-tax cash flow for toll-milling was estimated to be $41M at $25/lb. cobalt and an assumed recovery rate of 93%. At that same cobalt price and a 97% recovery, cash flow increases to about $48M/yr.

Importantly, with improvements in op-ex as detailed in this September press release, PLUS a higher recovery (97% vs. 93%), and with modest room for further enhancements, the same annual cash flow depicted in the May 2020 BFS from a $25/lb. cobalt price assumption might now be achievable at $22/lb.

If First Cobalt is not toll-milling ore for Glencore (or another party) then it gets to keep all (or substantially all) project-level pre-tax cash flow! I don’t know what portion of the economics Glencore was expected to get, but I think it was at least half.

Therefore, although there’s more risk associated with Glencore’s diminished role in the refinery restart, First Cobalt Corp.’s (TSX-V: FCC) / (OTCQX: FTSSF) shareholders could receive up to twice the cash flow they had been expecting, starting in about two years. Net, net I consider this to be a very favorable development, but I’m a risk-loving investor in small-cap metals / mining companies.

Disclosures: The content of this article is for information only. Readers fully understand and agree that nothing contained herein, written by Peter Epstein of Epstein Research [ER], (together, [ER]) about First Cobalt Corp., including but not limited to, commentary, opinions, views, assumptions, reported facts, calculations, etc. is to be considered implicit or explicit investment advice. Nothing contained herein is a recommendation or solicitation to buy or sell any security. [ER] is not responsible for investment actions taken by the reader. [ER] has never been, and is not currently, a registered or licensed financial advisor or broker/dealer, investment advisor, stockbroker, trader, money manager, compliance or legal officer, and does not perform market making activities. [ER] is not directly employed by any company, group, organization, party or person. The shares of First Cobalt Corp. are highly speculative, not suitable for all investors. Readers understand and agree that investments in small cap stocks can result in a 100% loss of invested funds. It is assumed and agreed upon by readers that they will consult with their own licensed or registered financial advisors before making any investment decisions.

At the time this interview was posted, Peter Epstein owned shares of First Cobalt Corp., and the Company was an advertiser on [ER].

While the author believes he’s diligent in screening out companies that, for any reasons whatsoever, are unattractive investment opportunities, he cannot guarantee that his efforts will (or have been) successful. [ER] is not responsible for any perceived, or actual, errors including, but not limited to, commentary, opinions, views, assumptions, reported facts & financial calculations, or for the completeness of this article or future content. [ER] is not expected or required to subsequently follow or cover any specific events or news, or write about any particular company or topic. [ER] is not an expert in any company, industry sector or investment topic.