Are the blacks swans waking you up from the summer doldrums? The technical signals are turning positive for gold (GLD), silver (SLV) and the junior gold (GDXJ) and silver (SIL) miners. The record shorts such as hedge funds and high speed traders who have been manipulating the paper market may soon run scared as major accumulation has entered the sector this month.

Black swans are apparent all over the horizon which could boost gold and silver prices. Look at the news Russia cuts off Gas from Europe, Baghdad May Fall to Jihadists, 3 Bible Students in Israel Kidnapped by Hamas and the list goes on and on. There is a lot of tension and uncertainty that could shake the large cap equity markets which are overbought and inflated.

Look at the increase in volume and price appreciation in the gold junior miners (GDXJ) so far in June. The 3 month downtrend has been broken as well as the 50 and 200 day to the upside. Major accumulation in the junior gold miners may be forecasting black swans and higher precious metal prices.

Gold and silver have held the lows and major volume and big money is coming into the sector.  The record short position may already be running from cover.  The Junior Gold Miner ETF(GDXJ) is already up 15% this month.

With geopolitical tensions increasing in the Middle East and Eastern Europe get ready for a big breakout at $1400 on gold.  The move in the junior miners and silver could be huge and provide great leverage to the price of gold bullion.

Also watch the oil price making a big jump as all of Iraq’s oil is at jeopardy of being lost as Al Qaeda takes over key areas which may include the capital Baghdad.  Higher energy prices could influence the inflationary forces here in the United States creating a possible stagflation.  Investors should keep a close eye on platinum (PTM), palladium (PALL) and uranium (URA).

Remember the US, European and Japanese economies are not growing, yet equity and food prices are soaring.  The stock market and US bonds are way overvalued, while gold, silver and junior miners are just beginning to breakout of a multiyear base.  As accumulation continues in the precious metals look for the record short position in precious metals to cover. 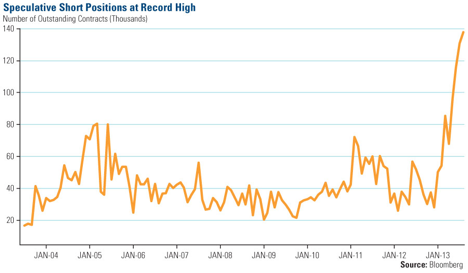 The accumulation in high quality junior gold miners is happening right before our very eyes.  For instance look at one of our featured companies Integra Gold (ICG.V or ICGQF) who just announced that their Private Placement is oversubscribed due to major demand from investors.

Integra hopes to be Quebec’s next major gold producer and is raising $8 million to advance their Lamaque Project in Val D’or.  This is probably the highest grade undeveloped gold mine in Quebec right now with over 3.3 million tones at over 7g/tonne.

Integra came out with a positive Preliminary Economic Assessment (PEA) in April which I was very excited about and shared with my premium subscribers.  The numbers look excellent with low capex, quick payback and a high rate of return.  The metallurgy is excellent.

The money raised should be able to expand the resource with more drilling and increase the mine life as management continues to actively explore.  They are hitting some of the best intersections to date that are thick and higher grade.  There are assays pending and over 57,000 meters of drilling has not been added to the previous resource.  An updated resource should come public after the next round of drilling later this year which may be exciting for shareholders able to get in at these lower prices.

Integra Gold may be a classic takeover target as they have one of the highest grade advanced stage gold projects in Quebec and is located in the same district as Osisko’s 10 Million gold ounce Malartic Project which is currently under acquisition by Yamana and Agnico Eagle who outbid Goldcorp.  Integra’s Lamaque Project sits near Agnico Eagle’s 1.6 Million Ounce Goldex Mine.

With the recent PEA on Integra’s Lamaque Project published I expect some of the majors to show interest in the exceptional high grade gold project with impressive economics.  At a base case of $1275 gold, Integra showed an IRR of 51% and a payback of 1.5 years with an NPV of $146 million.  This PEA is a major milestone as it shows strong financial returns with quick payback at a relatively low capex.

It must be noted the resource has the potential to grow.  Integra has seven exploration drills turning on the property right now.  In addition Integra has 30k meters of drilling already completed and 10k meters pending that has not been added to the 2013 resource or factored into this PEA.

One of the most important decisions in investing in a development company is to study the infrastructure and local community support.

Its great to have high grade and fantastic metallurgy but what about the infrastructure and skilled local labor force?  Integra’s Lamaque Project is located within 3 km of the city of Val d’Or, Quebec.  Val d’Or is a mining community with over 35k people.  There is a high level of expertise in underground gold mining.  Miners can live and work in the same community which is a major benefit given the fact that it is rare in the industry.

The Lamaque Project is within 200 m of the Trans Canada Highway.  The land where the project is located has no homes or businesses which would require relocation.  Over the past six months, Integra has been proactive in building a relationship with local community by participating in 25 private and public meeting with stakeholders.  The company is encouraged by the support of the local community and is already commencing environmental studies.

Quebec was ranked #11 by Fraser Institute as a mining friendly jurisdiction.  Despite the weak junior market, Integra has been able to raise money and attract equity interest from Shandong Gold Group, a $4.7 billion dollar gold producer who owns 5% of Integra and has a seat on the board of directors. 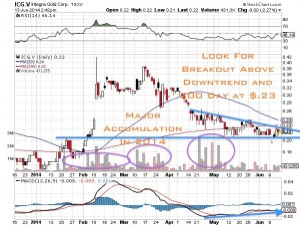 Look for Integra to find support under the 200 day moving average and reverse above it at $.23.  Notice the large volume accumulation in 2014 signifying major buying.  I expect this to continue as they continue to drill and provide a resource update later this year.

Disclosure: I own Integra Gold and the company is an advertiser on my website.  Be aware of any conflict of interest and always do your own due diligence.