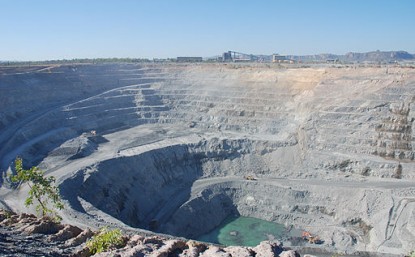 The commodity equities are selling off as The Fed halts QE3. Commodities, metals and the junior miners are hitting multi year lows and falling below 2008 credit crisis levels. This is not a time to panic but continue to accumulate as the bear market may be reaching the final capitulation stage. This decline may be a sign that the quantitative easing may have lifted stock market indices, but it did little to improve demand and growth in the economy reflected by demand for energy and metals.

I just returned from the New Orleans Conference which was headlined by Alan Greenspan the former Federal Reserve Chairman from 1987 to 2006. It is interesting to note that Greenspan has become bullish on gold. He believes that quantitative easing did not accomplish what it was designed to do. It helped lift the stock market and stabilize the real estate market, however it fell short as the US economy is not really recovering like it should have. Gold is the best hedge against this uncertainty.

I happen to agree with him. Real estate values have jumped and stock market indices are hitting new highs. Only a small fraction of the US has gotten wealthier as the real economy continues to struggle. Greenspan is continuing to warn about the Fed’s exit from quantitative easing, which I am quite concerned about as well. Look at the recent volatility in the US dollar and treasuries. When the US dollar is moving parabolically higher like a dot com stock I exercise caution as this could have drastic effects on foreign exchange markets and international trade. The way to hedge against this volatility caused by government interventions and manipulations is precious metals and commodities. Accumulate during a bear market when it is on sale. A turnaround could be right around the corner.

Contrarian value investors should be looking at emerging junior uranium producers and explorers that are still trading for pennies on the dollar. The uranium spot price has made a dramatic move higher as Japan begins turning back on nuclear reactors and large producers such as Cameco announce production declines. There is a lot of buying in the spot market and it should be soon reflected in the performance of the junior uranium miners (URA). Look for a breakout past $37 on the U3O8 spot price. A town in southwest Japan approved the restart of a nuclear power station.  This is a sign that if Japan who suffered greatly from the Fukushima disaster can turn back on reactors then the rest of the world should continue to build newer and safer next generation nuclear reactors.  Japan turned off the nuclear reactors following Fukushima in March of 2011.  However, nuclear reactors may start coming back online in 2015.  Japan’s economy can no longer handle importing expensive oil and gas.  Nuclear is vital to Japan’s economy and used to supply close to one-third of their overall energy needs.

Don’t forget that he US is the largest consumer of nuclear power yet produces less than 10% of what it demands every year. For decades, America relied on Russia to supply cheap uranium in the megatons to megawatts program. This deal concluded at the end of 2013 and Russia could continue tightening its control on uranium as a bargaining chip against economic sanctions from the West.

Smart money is buying small emerging junior uranium producers in the US where demand far outpaces supply. Anfield Resources Inc. (TSX.V: ARY)(OTCQB: ANLDF) released news that they are acquiring the Shootaring Canyon Uranium Mill from Russian nuclear giant Uranium One. They just announced approval from the Utah Division of Radiation Control to transfer the license. Anfield acquired a portfolio of uranium assets around the mine with historical estimates of 6.8 million pounds of uranium. For only $5 million in cash and shares paid out over 4 years Anfield has jumped to become a major contender in the U.S. uranium industry.

Anfield now owns one of three licensed uranium mills in the United States with one of the largest uranium land packages of more the 65k acres. Owning the mill is crucial as it allows the company to have control all the way from mining to production of yellowcake. Anfield could be a major supplier of uranium to help with the current supply deficit in the United States.

As Anfield Resources CEO Corey Dias said, “We are extraordinarily excited about the acquisition at it is transformational for the Company. With the acquisition of one of only three licensed and permitted uranium mills in the United States, we have significantly accelerated our timeline with regard to becoming a uranium producer. The mill is currently in good condition as it has been on continuous care and maintenance since it ceased operations.” With a market cap of only $10 million Anfield may be a cheaper and a more undervalued situation than some of its peers.

Disclosure: I own Anfield Resources and the company is a website sponsor.