Novo’s Executive Co-Chairman, acting Chief Executive Officer, and director Mike Spreadborough commented in a press release: “We are very pleased with the most recent set of assay results from drilling at the Malmsbury project, highlighted by strong grades generated at the Queens Birthday and Leven Star reefs, along with a compelling result from step-out hole MD22.

“We know this region is highly prospective and we will continue to systematically test compelling targets to build each project in size and scale. The team in Victoria are doing an excellent job and we are excited by the future growth potential of our Victorian project portfolio.”

Highlights from the exploration update are as follows: 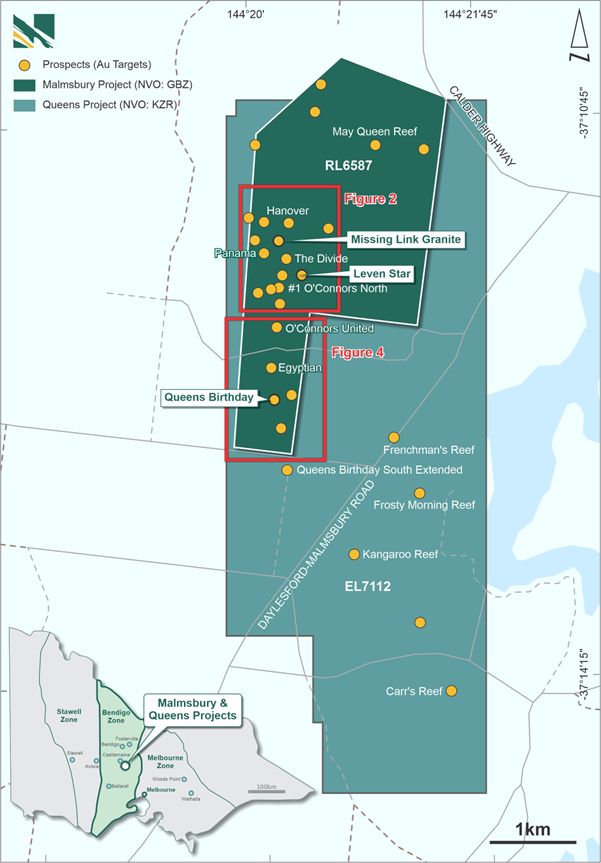 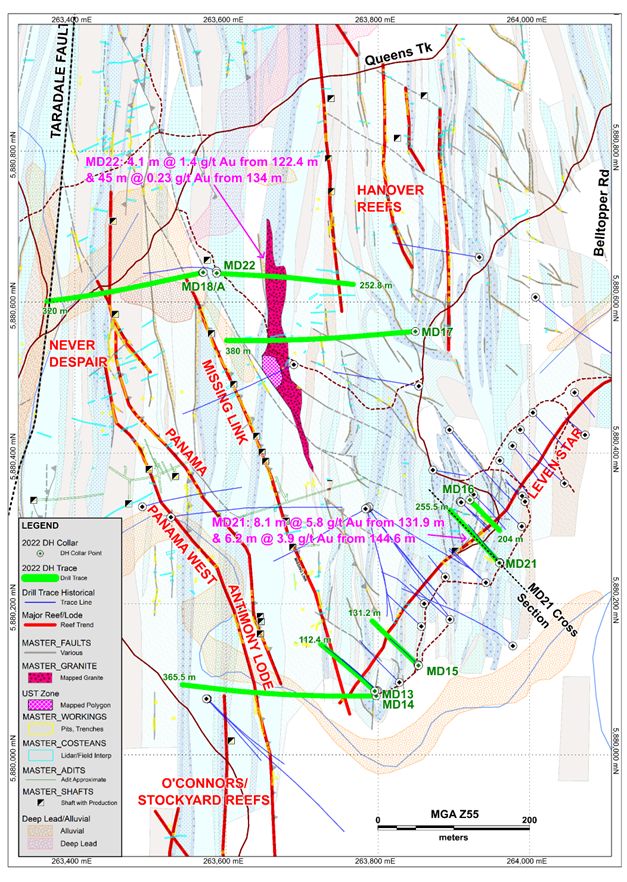 Novo exercised its option over the Malmsbury Project to earn a 50% interest, and the right to earn an additional 10% interest by incurring A$5 million in exploration expenditure over a four-year period2.

Novo exercised its option over the Queens Project to earn a 50% interest, and the right to earn an additional 20% interest by incurring A$5 million in exploration expenditure over a five-year period3.

Results referred to in this news release are not necessarily representative of mineralization throughout the Malmsbury Project and the Queens Project. 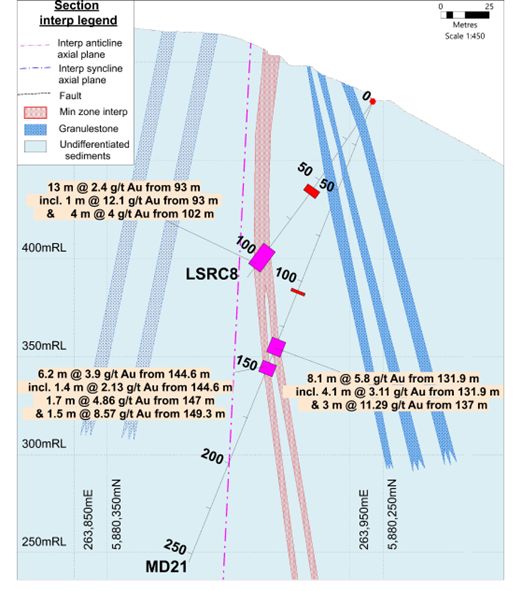 *1 Intersection in MD20 remains open. No sampling immediately prior to mineralised interval from 400.9 m. 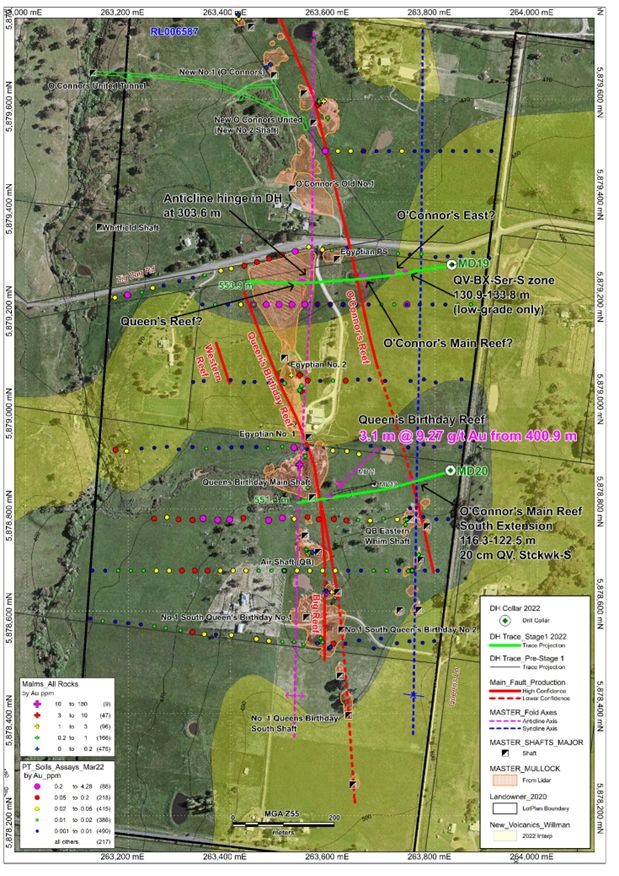 Novo Resources (TSX:NVO) has reported an exploration update from the ongoing drilling program in the Becher Area of the Egina District in Australia. The program includes systematic regional aircore drilling including more than 650 holes for 16,500 m of  > 30,000 m program completed so far with a deeper RC drilling program intended to follow-up significant aircore results and test discrete targets.

The programs are in progress and testing high-priority structural and intrusive-related gold targets. The initiative was begun after two heritage surveys were recently completed at the Becher area. The aircore drilling at Becher complements the surface soil anomaly at Nunyerry Norther, about 80 kilometres south of Becher within the same district. The drill program will continue through the end of 2022 and into 2023.

Dr. Quinton Hennigh, Non-Executive Co-Chairman of Novo Resources commented in a press release: “Our first aircore drill results have yielded strong gold results at the Becher Area, indicating that the Whillans and Irvine shear zones are indeed prospective for deposits similar to those at De Grey’s adjacent Mallina project. Aircore drilling, a means of rapid, shallow drilling widely used across Australia as a first pass means of testing new areas for mineralization, is proving highly effective at Becher. Several large-scale anomalies are emerging, the largest of which is 650m across and situated along the southern Irvine shear zone. Alteration assemblages, lithologies, geochemical associations and size of these mineralized areas are similar to those observed in other nearby large gold discoveries. Although we have lots more drilling to complete and results to come in, the anomalies suggest that deeper drill testing is required.”

The Becher Area (northern E47/3673, 100%-owned by Novo) contains multiple priority orogenic gold targets in the highly prospective and under-explored Mallina Basin. The area is located ~28 km to the WSW of De Grey’s Hemi gold deposit2. Novo’s interpretation of a series of significant shear corridors, including the ENE trending Irvine and Bonatti Shears (part of the regional Wohler Fault using GSWA 1:100,000 scale mapping nomenclature) and the EW trending Whillans and Heckmair Shears, is key to delineating these newly defined targets.

The current > 30,000 m aircore drilling program commenced in early September 2022, with over 650 holes for 16,500 m completed to date. 16 regional traverses at approx. 640 m line spacing and 25 m hole spacings have been completed along the Irvine Shear and Whillans Shear, with the opportunity to infill to 320 m spaced lines now possible given the recently completed second heritage survey on E47/3673. Drilling was designed as part of a large-scale systematic targeting program, supported by recent high resolution geophysical data sets, in conjunction with field mapping and sampling and research of all relevant historical data1.

A minimum of 30,000 m of aircore drilling has been planned for 2022, however Novo expects this to be exceeded. The program will test four shear corridors and numerous sanukitoid targets, as well as antimony-arsenic-gold soil anomalies defined by previous explorers.

Results have been received from the first assay batch of 4 m composite samples analysed by PhotonAssay for the southernmost drill lines on the Irvine Shear Corridor (Figure 5). Four zones for infill aircore drilling have been identified from geological logging and current assay return. 1 m split samples and multielement assays are pending for anomalous drill holes.

Refer to Appendix 1 below for a complete list of assay results. True widths cannot be estimated at this time.

The geology of the Nunyerry North target area includes quartz vein-related gold mineralization within a sequence of ultramafic komatiites and mafic rocks, juxtaposed by regional shears and offset faults. Novo’s exploration licence 47/2973 is 70%-owned, with the remaining 30% held by Mark Creasy and entities controlled by him.

Follow-up work planned includes heritage surveys and logistics for road access in preparation for drilling in 2023.

Novo Resources (TSX:NVO) has reported assay results from the diamond drilling program on RL006587 at the Malmsbury Project in Victoria, Australia.

Novo exercised its option over the Malmsbury Project to acquire a 50 percent stake and the right to earn an extra 10 percent interest by investing A$5 million in exploration costs over the following four-year period. The company’s results follow up on early success from the first 3 drill holes of the program, and confirm high potential for mineralization extension.

Ms. Kas De Luca, General Manager of Exploration at Novo Resources, commented in a press release: “These preliminary, high-grade results from the Malmsbury Project are very promising. Following the early success and results from the first 3 holes of this drill program, further work to confirm potential for mineralization extension, including IP and additional drilling, are planned for 2022 and early 2023. We look forward to working with our partner, GBM, to continue advancing the exciting potential of the Malmsbury Project.”

Approximately 2,000 m (7 holes, 1 in progress) of a circa 2,650 m planned diamond drilling program have been completed to date at the Malmsbury Project. At the time of writing, gold, and multi-element assays from three of six holes completed have been returned in full. Significant results from these early holes are highly encouraging and include, but are not limited to:

Drill hole MD14 was planned to drill beyond the interpreted Leven Star Reef position to test extensions to the Missing Link and Panama South historic gold reef workings (Figure 2 and 3). Significant gold mineralization within multiple puggy, sulphide rich, sericite altered shears in distinctly bleached sediments from 65 m – 74 m (Refer to Table 1 for significant intercepts), strongly suggest that the Missing Link Reef has been intercepted in this hole, and add a significant strike and down-dip extension to the known extent of this gold reef target.

The Missing Link Reef was also likely intersected in MD13 within similarly bleached and sericite altered sediments from 71 m – 84 m, returning 4 m @ 2.9 g/t Au from 80 m, including a narrow high-grade interval of 0.4 m @ 24.4 g/t Au from 81.2 m, and confirming the high-grade potential for this reef (Refer to Table 1 for additional significant intercepts).

Reported intercepts for MD16 are interpreted to be oblique. Exact true widths cannot be determined until mineralization trends are remodelled to incorporate the recent results (including the new potential splay zone); however, these are anticipated to be a reduction in the stated intersection widths.

Drill hole MD17 was designed as a westerly directed, ca. 400 m hole to test the recently discovered Missing Link Monzogranite at depth, in addition to the Missing Link and Hanover West historic gold reefs. This hole aimed to determine the geometry and gold endowment of the intrusion and targeted the monzogranite for its potential as an IRGS, in addition for the potential for orogenic vein style mineralization.

MD17 successfully intercepted the Missing Link Monzogranite between 204 m – 269 m down hole, in addition to a smaller and potentially parallel shallow sub-surface granite dyke interpreted in strongly oxidised material near the collar. Drilling confirms a steep (70 – 80°) east-dipping geometry for the intrusive that widens noticeably at depth. The intrusive is characterized by strong sericite alteration and disseminated sulphides throughout with regular intervals of planar white quartz-sulphide stockwork veining. A distinct 1 m-wide sulphide-shear-breccia within strongly quartz veined sandstone occurs within a metre of the upper granite contact. 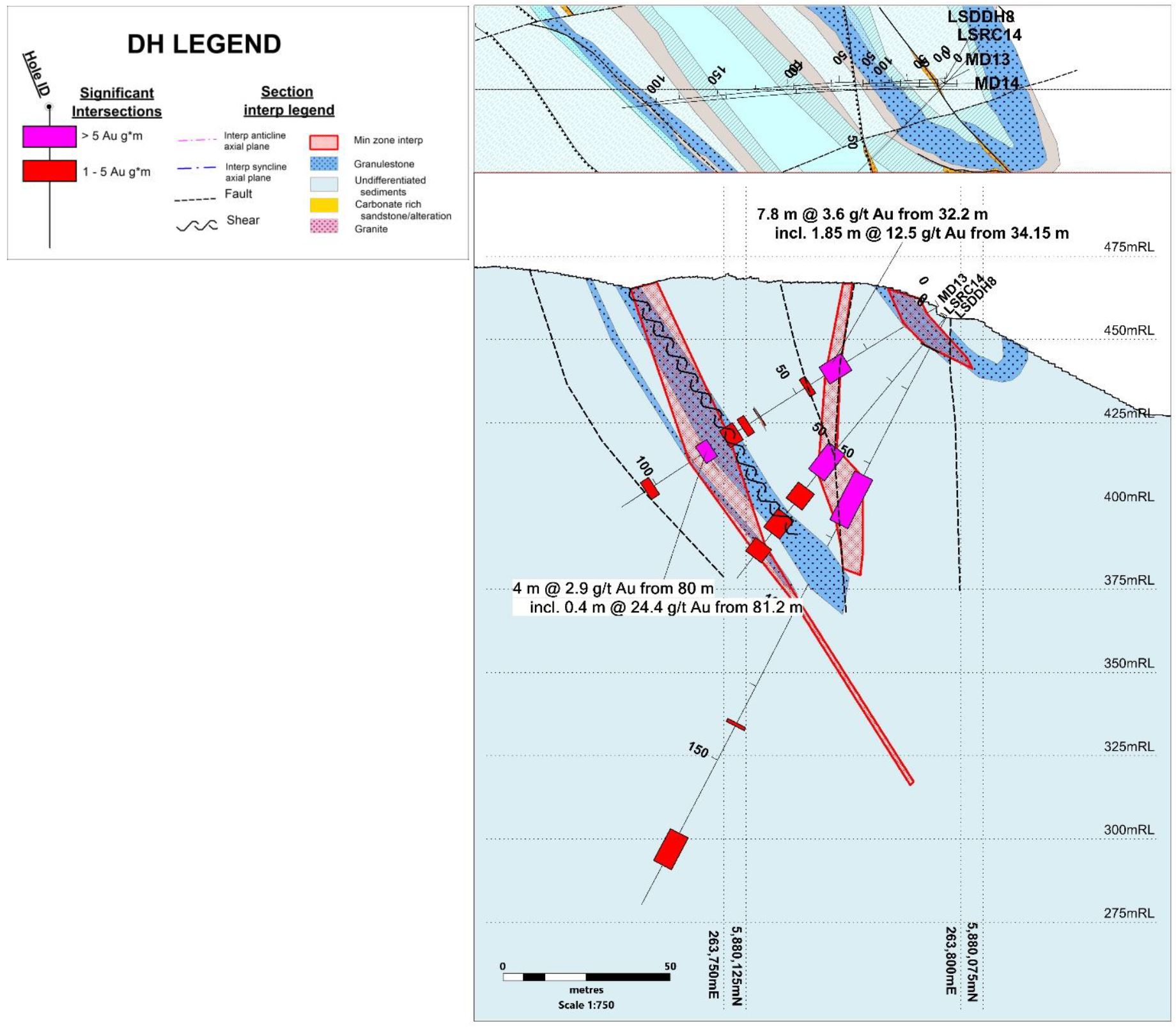 Novo Resources (TSX:NVO) announced last Friday that it will begin its brownfield exploration programs at its highly prospective Nullagine gold project located in the East Pilbara District of Western Australia.

The new exploration programs will focus on oxide opportunities at the Nullagine gold project with a 15,000 m reverse circulation drilling program which started at the Parnell-Vulture trend, also known as Parnell, during the first week of November 2021. This will take the company into the first quarter of 2022 as well.

Gold assay results from the new drill program are expected to be released by December 2021. Novo Resources has a priority arrangement with Intertek1 to provide PhotonAssay gold results.

Parnell is located about 45 kms from the Golden Eagle processing facility and can be accessed by an existing reliable haul road with surrounding infrastructure attached. Parnell covers a strike length of approximately 2 kms and contains a series of vein-hosted targets with historical drill intercepts.

The Parnell and Vulture reverse circulation programs are the first programs at the Nullagine gold project as things begin to ramp up, with forward programs currently being generated at several priority basement targets.

Novo has already conducted detailed mapping and gridded soil sampling at Parnell and Vulture to determine the mineralization potential, but has yet to acquire the necessary details to validate historical data. Once this information is acquired, it will serve as further confirmation and guidance for targets. However, significant rock samples from both Parnell and Vulture highlight the presence of high-grade gold targets, and further confirm the prospectivity of this area.

Multiple Projects on the Go

Novo’s primary focus is exploring and developing gold projects in the Pilbara region of Western Australia. It has several ownership interests across its 13,000 sq km land package, and has several different projects on the go.

The new drilling programs follow other recent news from Novo Resources (TSX:NVO) as its Golden Eagle processing facility or “Golden Eagle Mill” had restarted production at the beginning of November. The faculty underwent opportunistic maintenance as the company repaired its main crushing unit, which is now back online.