The gold (GLD) and silver (SLV) price may be reversing over the next couple of weeks. The junior miner gold ETF (GDXJ) is reversing above the 50 day moving average and breaking above its recent three month downtrend.

When the huge cash positions waiting on the sidelines or taking profits in the equity market rising on low volume return to the ignored resource sector the gains could be huge. Already the volume in GDXJ in 2014, has jumped outpacing 2012 and 2013. On the other hand the S&P500 has been rising on light volume which is often a warning sign that the extended rally is getting exhausted. 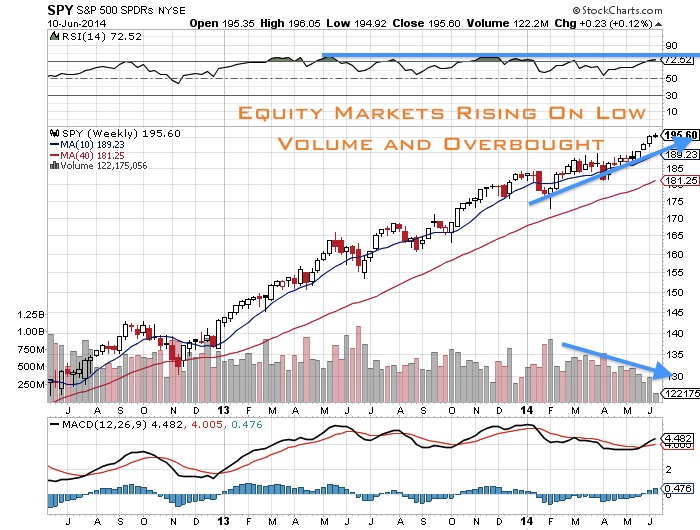 This indicates to me that possibly the large institutions are accumulating the juniors after all the retail investors jumped ship. Prices could jump rapidly in the Toronto Venture Exchange where most of the legit junior miners are traded. These small cap juniors could gap higher as the major institutions are hardly exposed to the mining sector at all.

One of our long term junior gold mining favorites since 2011, Corvus Gold (KOR.TO) came out with very positive news that they extended the high grade veins at their Yellowjacket Deposit at North Bullfrog and actually may have a new vein discovery.  The drilling may be suggesting that their are additional veins around Yellowjacket.  The first 5,000 meter program will focus on Yellowjacket and then the second 15,000 meter program will explore district wide for additional vein systems.  In addition, Corvus announced positive results of metallurgical studies using gravity which could increase recovery and reduce processing costs. 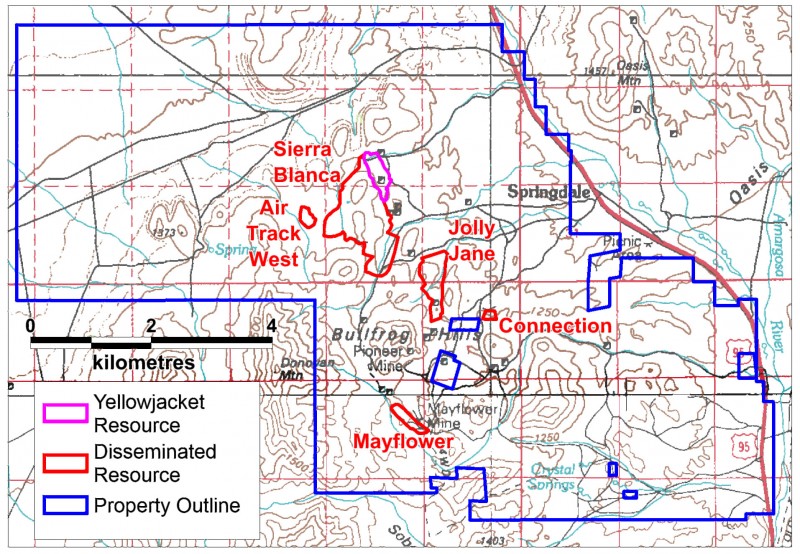 Corvus owns 100% of North Bullfrog which covers 68 square km in Southern Nevada, approximately 90 minutes from Las Vegas.  It is a huge property and there is the potential for additional discoveries.

All of this drilling and metallurgical work will be included in a new Preliminary Economic Assessment and resource update which will be completed after all of the 2014 drilling.  This could be quite an exciting time for this high quality junior gold miner Corvus Gold (KOR.TO or CORVF).  Remember management owns close to 10% and Anglogold Ashanti (AU) and Tocqueville Asset Management are the largest owners. 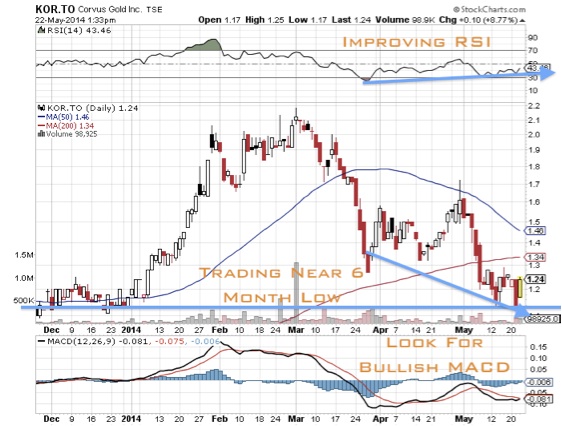 Corvus (KOR.TO) appears to be ready to make a reversal above the 200 day at $1.34 and despite recent progress is trading near a six month low.  Notice the improving RSI and MACD despite a new low this month.  This is usually indicative of a bullish reversal.

Disclosure: Beware of conflicts of interest.  I own shares of Corvus and they are a website sponsor.