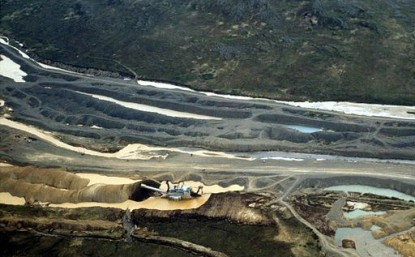 Briefly: In our opinion no speculative positions are currently justified from the risk/reward perspective.

Yesterday was a day when the precious metals market took a breather, but it’s not true that nothing changed at all. Friday’s breakout in platinum was invalidated. Is this a “short again” signal?

In short, not really, because this signal – even though it’s bearish – is not enough to make the situation very bearish on its own. 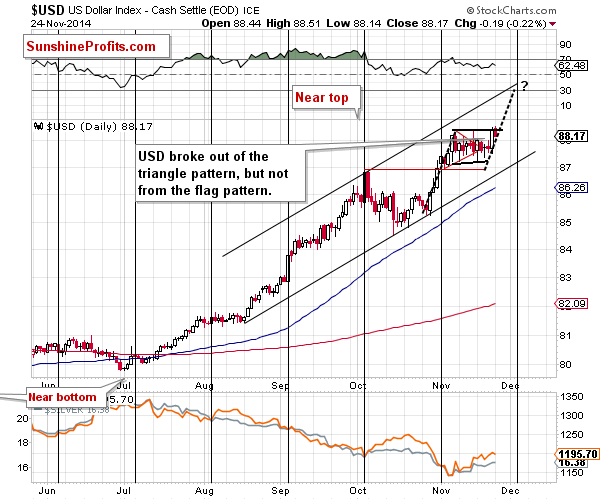 Not much changed from the short-term perspective, as the USD Index simply corrected some of its Friday’s rally and we didn’t see a breakout or breakdown from the flag pattern. Consequently, our yesterday’s comments remain up-to-date:

The USD Index moved visibly higher on Friday, breaking out of the triangle pattern. The implications are bullish but not strongly bullish, as the pattern started to resemble more of a flag than a triangle. Since the flag pattern was not broken, many traders probably thought that the situation hadn’t changed. This could explain the lack of response in the precious metals market. If we saw a strong breakout and metals didn’t react, then it would definitely be a sign of strength, but at this time, it could be the case that the market participants are still not viewing the dollar’s move as a something real.

The downside is limited in case of a breakdown, and the upside is visibly higher in case of a breakout. If we see a move similar to the one that preceded the recent consolidation, then we could see a move close to the 89 level that would materialize in the first part of December. This scenario seems quite likely also given the resistance line that would be reached (it would simply “fit”) and the cyclical turning point – we are likely to see at least a local top close to it.

We could see a small move lower before the rally starts, though. This means that the above doesn’t invalidate our previous outlook and price targets for the precious metals sector. 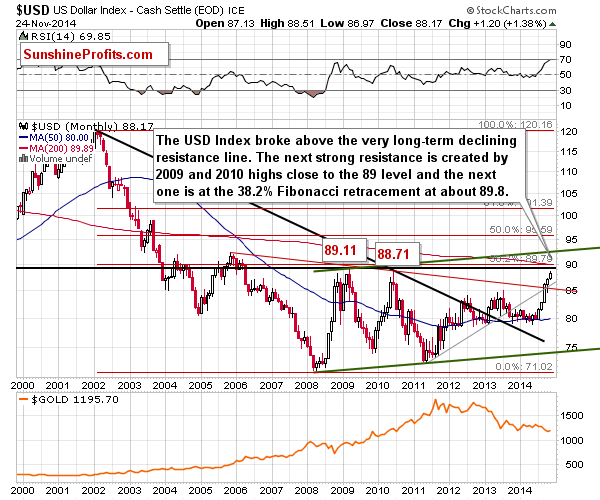 The above long-term chart should help in keeping things in perspective. As you can see, the next resistance level is very close – slightly above the 89 level. However, what’s also important is that if the USD Index moves even higher (for instance based on the expectation that the Fed will be hiking interest rates soon), it won’t be likely to move much higher, as the next significant resistance is just below the 90 level and it’s the 38.2% Fibonacci retracement level based on the entire 2002 – 2008 decline. Until the USD Index reaches at least the 89 level, the precious metals market will be likely to move lower based on the dollar’s future strength. However, if USD manages to rally to 89.8 or so and at that time gold is at one of the strong support levels, then we might consider speculative long positions in the precious metals sector. Would this be the final bottom for the precious metals market? It’s too early to say at this time – we will be looking for confirmations in other markets and ratios and report accordingly.

As basically nothing changed in the silver market (and what we wrote yesterday remains up-to-date) and changes are very similar in gold and mining stocks, we will comment on the last 2 markets simultaneously. 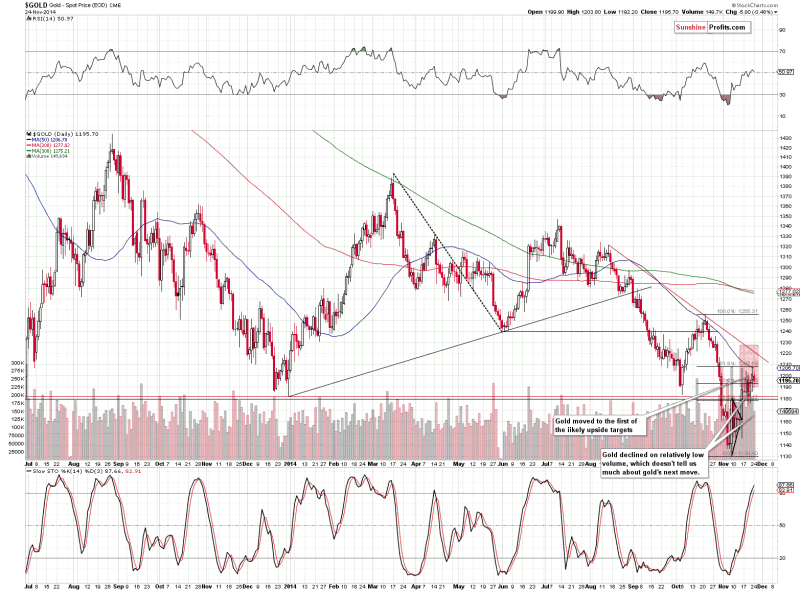 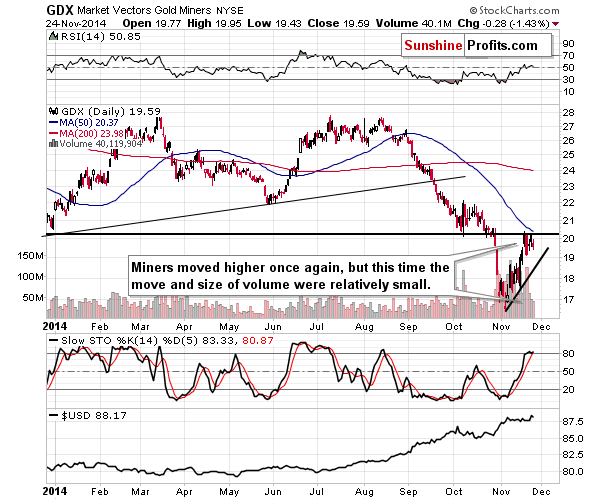 Both gold and mining stocks moved a bit lower yesterday and the move materialized on low volume. This doesn’t have meaningful implications as low volume during declines is something natural. High volume could confirm that the next decline is starting, but we saw no such thing.

(…) we can see that gold moved to the lower of our upside target levels. This level is created by the 61.8% Fibonacci retracement level and the 50-day moving average. The last time gold touched its 50-day MA, it was one day ahead of the top.

The implications of the above are bearish, but at this time we can’t rule out another $20 or so move higher, which would take gold to the declining resistance line.

Since gold moved higher along with the USD, we could very well see a further upswing (if the USD declines at least a bit), but if the USD breaks above the flag pattern, then gold will likely decline right away.

We saw a breakout on Friday, but we warned that acting on this bullish signal might be premature, as the breakout was not confirmed:

We saw a breakout, but the continuation of the rally is still not the most likely outcome in our view. We will get a more meaningful bullish signal if this breakout is confirmed, for instance by 2 more consecutive closes above the resistance line. For now, the breakout remains unconfirmed and thus of limited significance.

Platinum turned south yesterday and the breakout was invalidated. This is a bearish sign, but as we mentioned earlier today, this signal on its own is not significant enough to make the outlook for the entire precious metals sector bearish enough for us to consider opening short positions – at least not yet.

Summing up, we have some signs that the precious metals market is topping at this time (gold at a combination of resistance levels, the GDX ETF at the 2013 low, the USD Index’s rally and platinum’s breakout’s invalidation), but without a clearer and more definitive bearish confirmation it seems that opening a speculative short position is not justified from the risk/reward perspective. For instance, gold’s, silver’s, and miners’ ability not to decline on Friday when the USD rallied strongly is a bullish sign. We are very close to the point when short positions will be justified, but – in our opinion – we are not at it just yet.

As always, we will continue to monitor the situation and report to you – our subscribers – accordingly. We will aim to multiply the recent profits and will quite likely open another trading position shortly – stay tuned.

On an administrative note, the markets in the U.S. will be closed on Thursday and we expect the trading activities to be limited on Friday as well. Consequently, we there will be no Gold & Silver Trading Alerts on Thursday and Friday. The alerts will be posted until Wednesday and will then be posted normally beginning on Monday, Dec 1.

You will find details on our thoughts on gold portfolio structuring in the Key Insights section on our website.

We were bullish on gold as far medium-term is concerned for the vast majority of the time until April 2013. After that we have generally been expecting lower prices. Are we gold bears? No – we view this decline as lengthy, but temporary. We expect gold to rally in the coming years, but instead of following the buy-and-hold approach, we exit the long-term precious investments at the most unfavorable times and re-enter when things look good again, thus saving a lot of money. Additionally, our Gold & Silver Trading Alerts help you profit from the short-term price swings.