Orogen Royalties (TSX-V: OGN) will be on investors’ radar in the coming weeks with news about their Ermitaño and Silicon assets. Revenue from their 2% NSR on First Majestic’s Ermitaño project is forecasted to begin in Q1 2022. A NI 43-101 on Ermitaño is also expected to be released within weeks. Orogen’s other flagship royalty is a 1% NSR on the Silicon project in the Beatty District of Nevada, where AngloGold Ashanti’s activities have led to anticipation of drill results.

Orogen was created in August 2020 from the merger of two established exploration companies: Evrim Resources and Renaissance Gold. The switch to a royalty model was seen as a way to unlock market value based on near-term production from Ermitaño and Silicon.

However, Orogen is entering a saturated royalty market and, relative to larger players, faces a high cost of capital for asset acquisition. For this reason, Orogen aims to leverage its geological talent and prospecting experience to generate new royalties organically.

As Lawrence Pryer, Orogen’s Exploration Manager states, “in a royalty market that is incredibly saturated, we believe the technical expertise that we have will allow us to continue to generate a pipeline of royalty assets…. We also have a royalty division searching out opportunities that might be overlooked by some of the larger companies.”

Among their flagship assets is a 2% NSR on Ermitaño, an epithermal gold and silver deposit in the Sonora State, Mexico, owned by First Majestic (FM). FM has invested about $80M developing the project and inferred resources are 10.6 Ag (M oz) and 440 Au (k oz) with continued research expansion potential. An updated 43-101 is soon expected for FM’s Santa Elena project. For the first time, the report will include the Ermitaño project, which FM CEO Keith Neumeyer has stated is “going to be pretty exciting for the market”.

Orogen’s current revenue estimate of US$12.5 million over a 7 year mine life is based on 35% of total resources presently converted to the defined P&P Reserve. Therefore, Orogen expects US$27-30 million revenue from Ermitaño over 10-12 years. With production ramping up in Q1 2022, Ermitaño could permit Orogen to move from a $600k (projected) cash burn in 2022, to profitability. 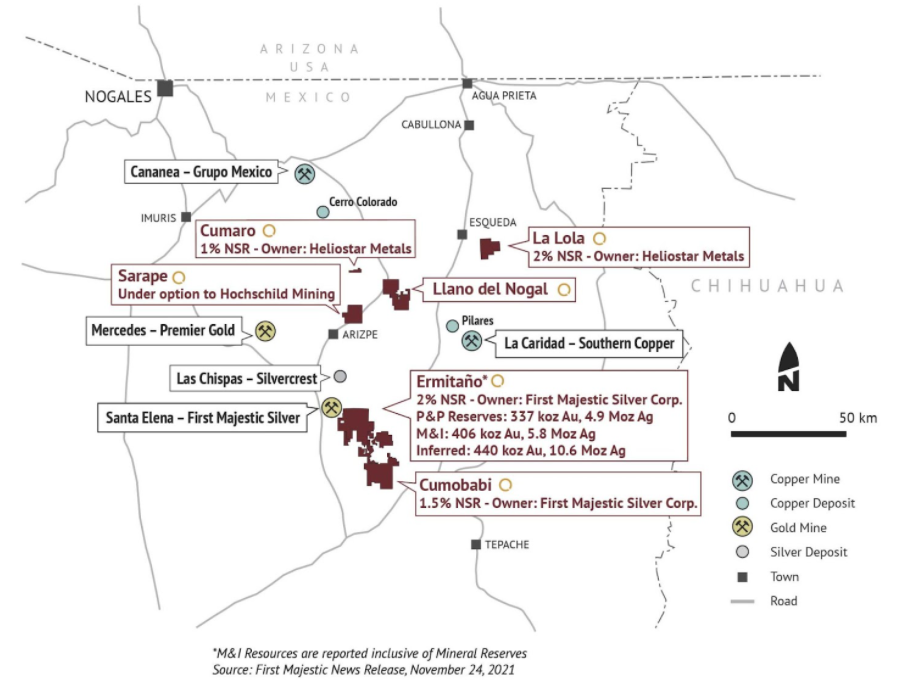 Orogen’s other main asset is Silicon, an epithermal gold play in southwest Nevada. AngloGold Ashanti purchased Silicon in 2020 for $3M plus 1% NSR covering 15,000 acres. AngloGold recently acquired Corvus, which owned the land surrounding Silicon, for US$370 million to consolidate assets in the Beatty District, one of the largest new gold districts in the state. They have also drilled over 70,000 meters in the area in recent years.

The acquisition and extent of drilling have led to much anticipation regarding drill results and resource estimates for Silicon. In an August 2020 presentation about the project, Orogen Chief Geoscientist Mark Coolbaugh said, “the AngloGold geologists are very anxious to tell their story…they have some interesting things to say about what should prove to be a very interesting gold deposit”.

AngloGold intends to initially develop the North Bullfrog project to production in the next 3-4 years, followed by Silicon. Therefore, compared to Ermitaño, Silicon is a medium-term development. 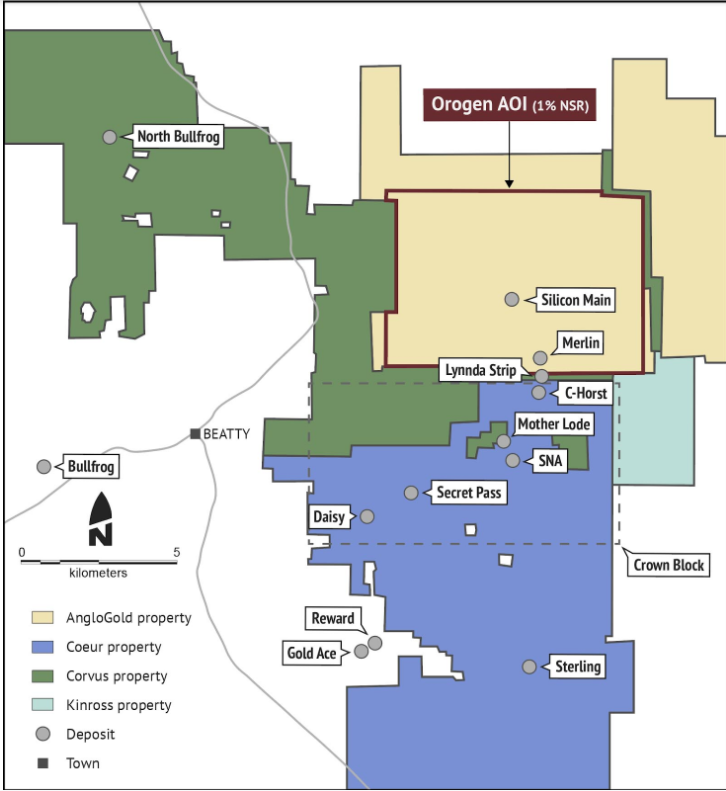 Other assets and valuation

With Silicon several years from production, Orogen will look to generate cash flow and unlock shareholder value elsewhere in their asset portfolio. Their recent sale of the Axe Project is one such example, where Orogen received 950,000 shares of Kodiak Copper.

Orogen currently has 12 active royalty assets which, aside from Ermitaño, are all in exploration or drilling stages. They also have 14 active joint ventures and 9 assets available for a joint venture.

Orogen’s current market cap. is about 80M. The near-term NSR from Ermitaño alone could be enough to put it within a 30 to 50 times earnings multiple range that is typical of royalty companies. As reports on Ermitaño and Silicon come in, a valuation picture for Orogen should become more clear, based on a discounted cash flow model from both projects.

The two flagship assets, together with the portfolio and technical expertise of the team, could be enough for investors to see Orogen as a way to combine solid valuation fundamentals with the upside potential of prospect generation.

Craig has worked in research consulting, international development, and software in Canada, Europe, and Latin America. His analysis aims to identify deep value as well as the long term macro and geopolitical context. He holds a MSc in Environmental Engineering from the Bauhaus University Weimar and a PhD from the Faculty of Economics at the Freiberg University of Mining and Technology.