If you’re looking to take your due diligence process to the next level, you have to incorporate a site visit into your repertoire. All the analysis in the world can’t replace the effectiveness of seeing a project and meeting the people in person.

Not only can you confirm what the management team is telling you, but you can meet the people who are on the front lines, mining underground, driving loaders, collecting soil samples or simply answering the phone in the office. All of this can tell you a lot about the health of a company and how it treats its employees, which is paramount to the company’s success, in my opinion.

In October, I had the opportunity to visit Anaconda Mining’s Point Rousse Project, and was not surprised to see that Anaconda’s leadership makes it a priority to empower their workforce. For this, they’re paid back through a motivated workforce.

I returned from my visit to Newfoundland and Labrador very satisfied that Anaconda’s operational team has the right ingredients for success; they look set to put the Stog’er Tight Deposit into production, produce a maiden resource estimate for the Argyle Zone, and explore and develop the Goldboro Project toward production.

2018 looks to be a monumental year of growth for Anaconda, one that I look forward to as a shareholder! 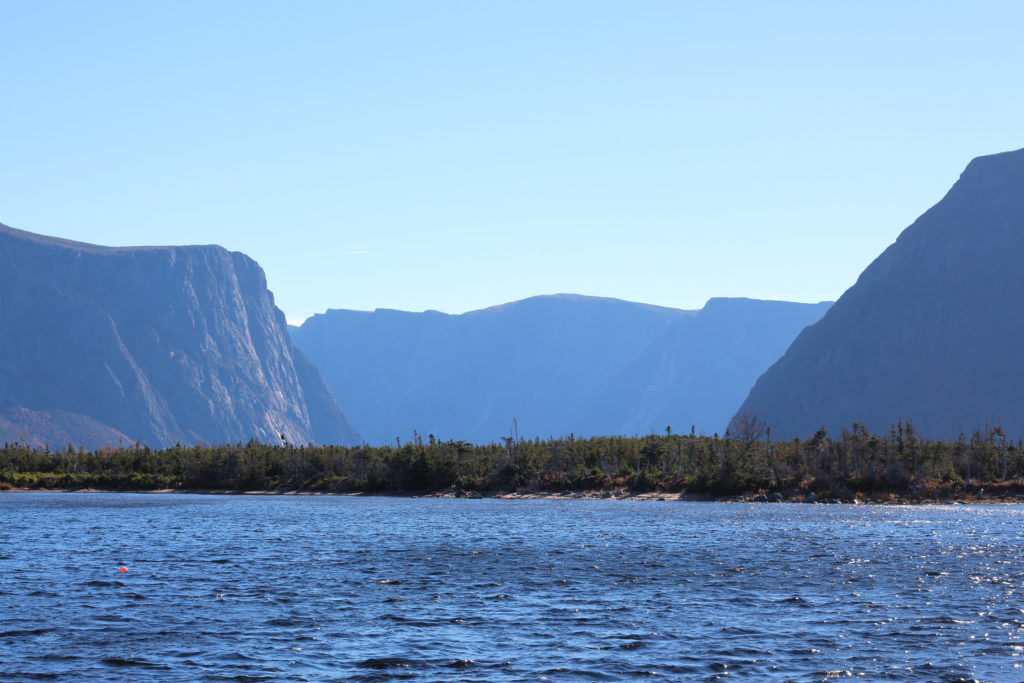 The western portion of the island of Newfoundland, while sparsly populated, possesses, in my opinion, some of  Canada’s most spectacular scenery and destinations. I landed in Deer Lake, an interesting town because it’s home to western Newfoundland and Labrador’s major airport, and compared to many of the other areas in this part of the island, it’s also well developed on a commerical level.

Most importantly, however, it’s the largest centre next to Gros Morne National Park, and acts as a jumping point for people looking to explore this UNESCO world heritage site.

On the last day of my trip, I spent the day hiking a few of the trails in Gros Morne and was amazed by the scenery – this is a place you will want to add to your bucket list, you won’t be disappointed! 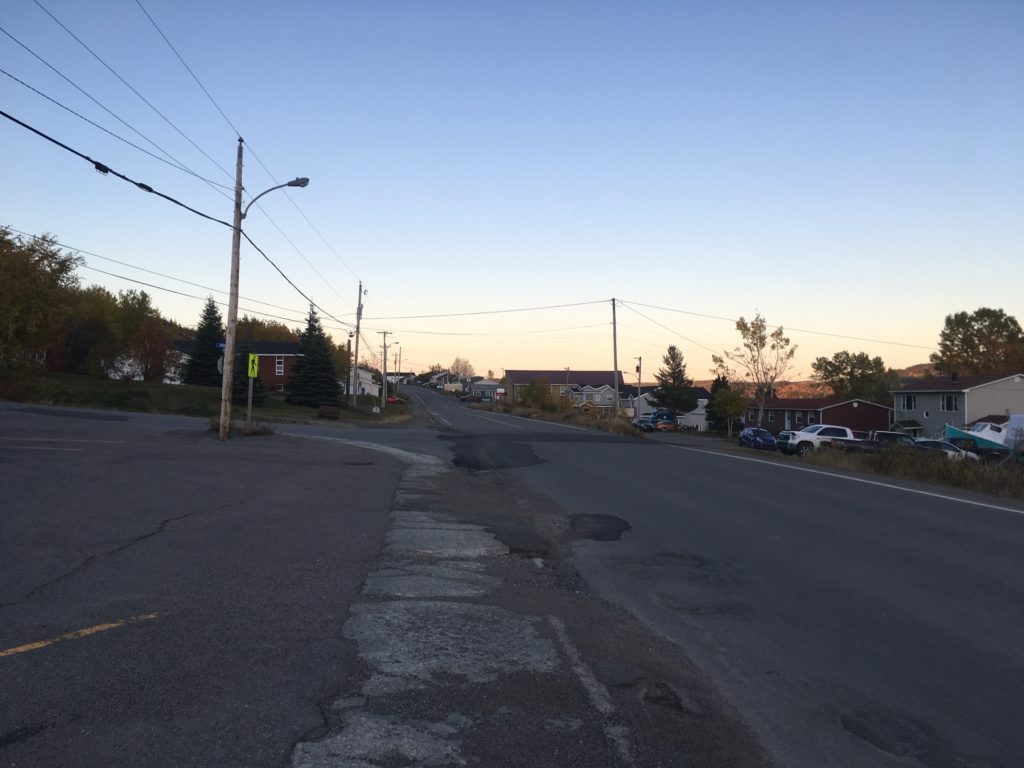 Baie Verte – HWY 410 thru the main part of town 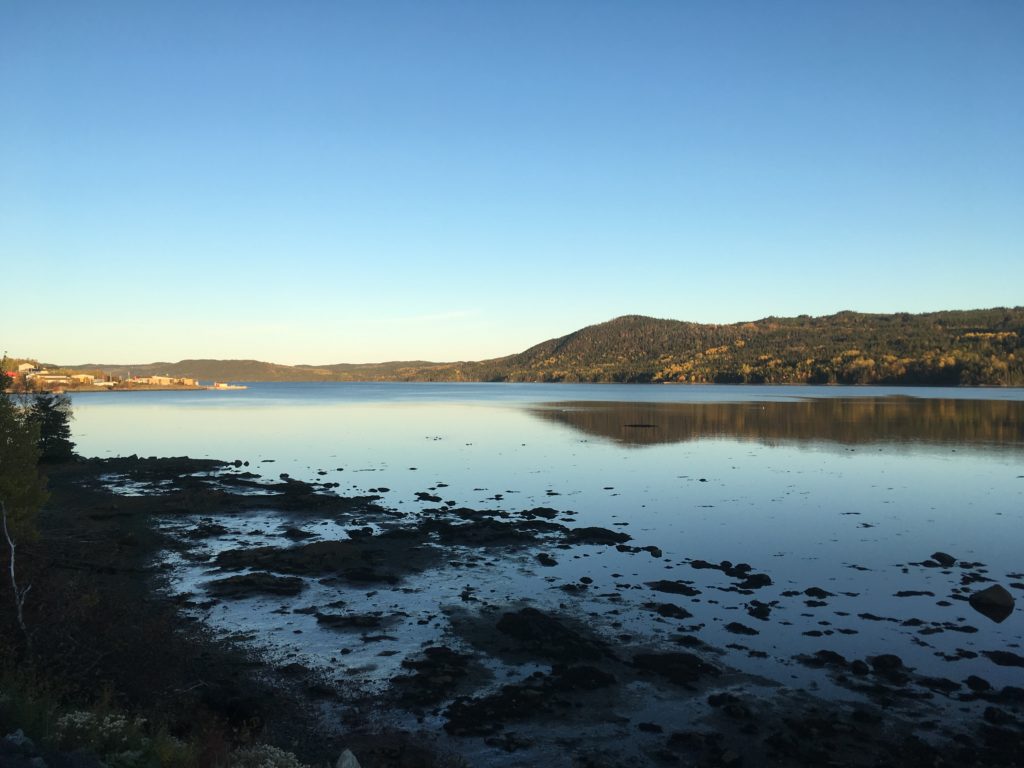 Baie Verte – A view from Bistro on the Bay

Baie Verte is a small town located on the coast of the Baie Verte Peninsula. Baie Verte’s history as a town is rooted in the pulp and paper industry, but owes its major growth to the asbestos mine which was founded in 1955 by George McNaughton and Norman Peters. 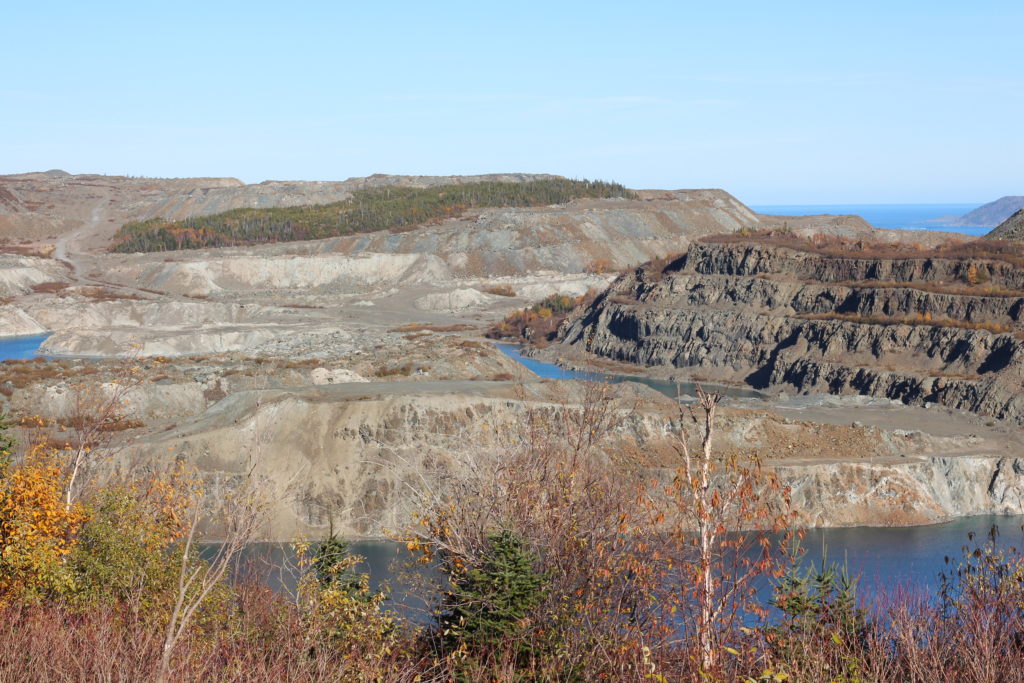 The open pit asbestos mining operation, which is located a short drive north of Baie Verte, employed 500 people at its peak. The mine was operated by a number of companies throughout its history, including  Advocate Mines Ltd., Baie Verte Mines Inc., and Teranova. The mine was closed permanently in 1995.

While there are other employers in this region of Newfoundland, I definitely got the feeling from speaking to a few of the residents that, outside of being employed by government, mining was the most desirable industry in which to work.

The mining operations that are closest to Baie Verte are Anaconda Mining’s Point Rousse Project and Rambler Metals and Mining’s Ming Mine and Nugget Pond Mill. The two companies, in total, employ roughly 400 people in the surrounding area.

Depending on your speed, it’s roughly a 2 hour drive from the Deer Lake airport to Baie Verte.  I spent two days in Baie Verte, staying at the Dorset Inn, which is right in the heart of town.  From here, Anaconda’s Point Rousse Project is about a 30 minute drive on the 418, which leads to the town of Ming’s Bight.

The Point Rousse Project is a collection of Anaconda’s Newfoundland assets, which include the Pine Cove Mine and Mill, the Stog’er Tight Deposit, the Aggregates Project and over 5,800 ha of prospective property.

The Point Rousse Project is located down a very well kept gravel road, about 5 km off the 418. The road makes its way through the forest, up and down hills, until reaching the site’s main offices to your left, and tailings pond to your right. Elevation-wise, the main offices, mill and tailings pond are set roughly 75 to 100 ft above the top of the Pine Cove open pit, and probably another 75 to 100 ft above the sea level at the Port Facility.

During my visit, I was accompanied by the Mine and Mill Superintendent, Tony Chislett. Chislett has been with Anaconda for 10 years, working in a few different roles before becoming Superintendent. In my experience, the best operation managers typically work their way up to the position after having extensive experience in the various jobs that they are going to manage. This not only gives them the much needed knowledge of the process, but also the respect of the workers.

Chislett and his team will be put to the test in the coming months with the conversion of the Pine Cove open pit mine to a long term tailings facility and the start up of the Stog’er Tight Mine, which should occur in early 2018. Not only this, but on the horizon there is the possible processing of the Goldboro ore, which will be an extra wrinkle for the team to deal with, as the Goldboro ore is different from what is mined along the Scrape Trend. 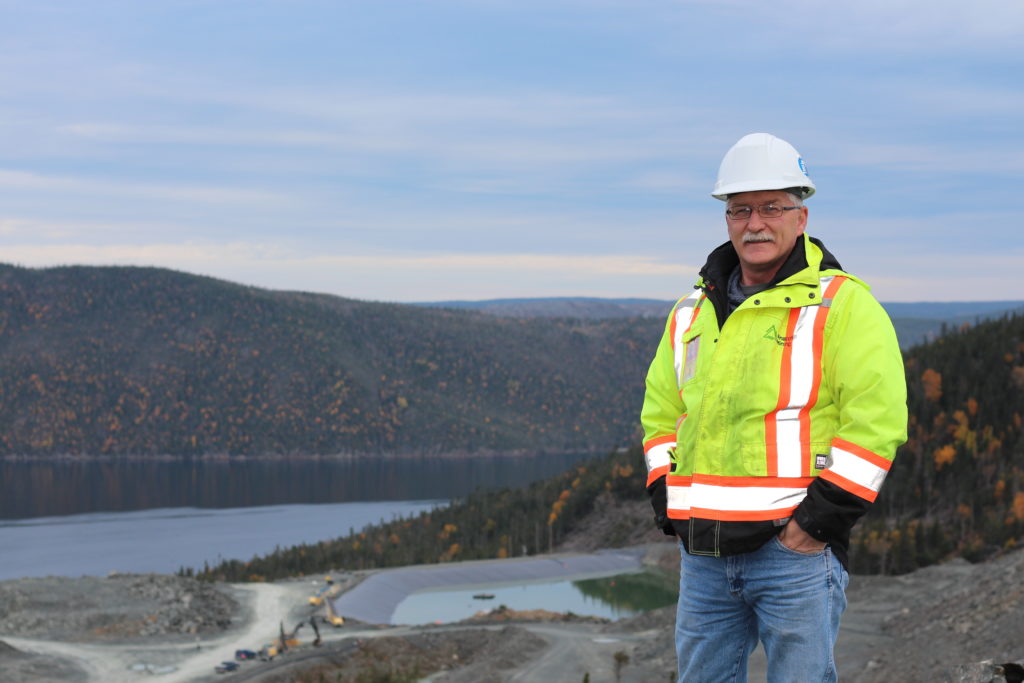 As we drove around the property, Chislett gave me a break down of the operation, and how they have incorporated cutting-edge technology and their personnel’s input to improve the process. For instance, GPS targeting for blasting and on the company’s heavy equipment allows for precision mining and the ability to maximize efficiency with the flow of ore to and from the open pit to the mill. With the movement to Stog’er Tight getting closer, these technologies, I believe, will aid Anaconda in avoiding some of the pitfalls that could accompany the mining operation’s move. 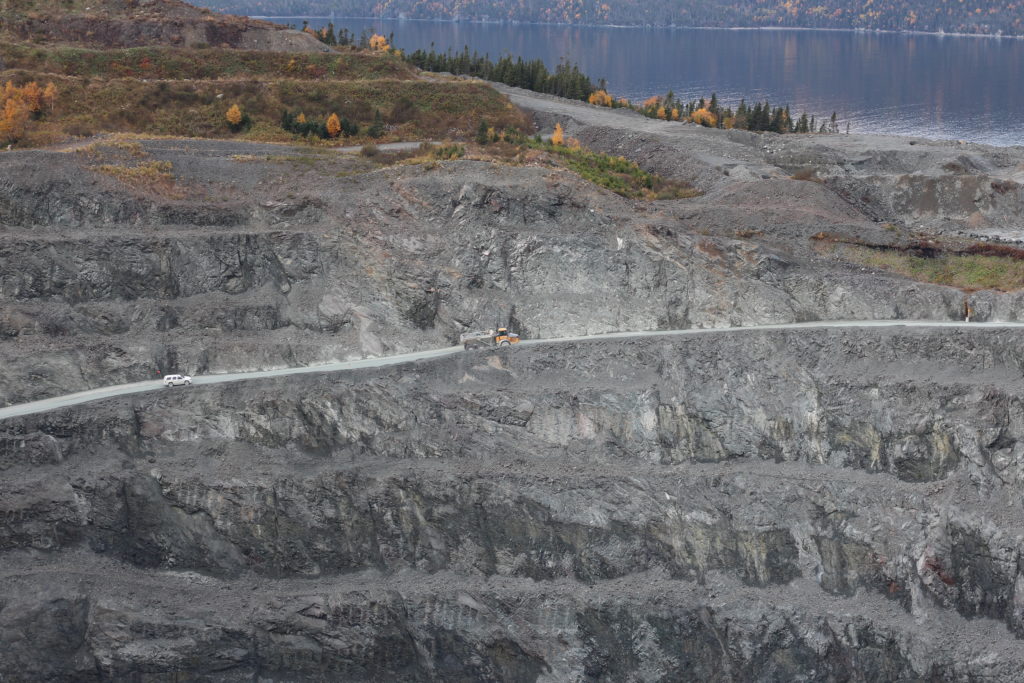 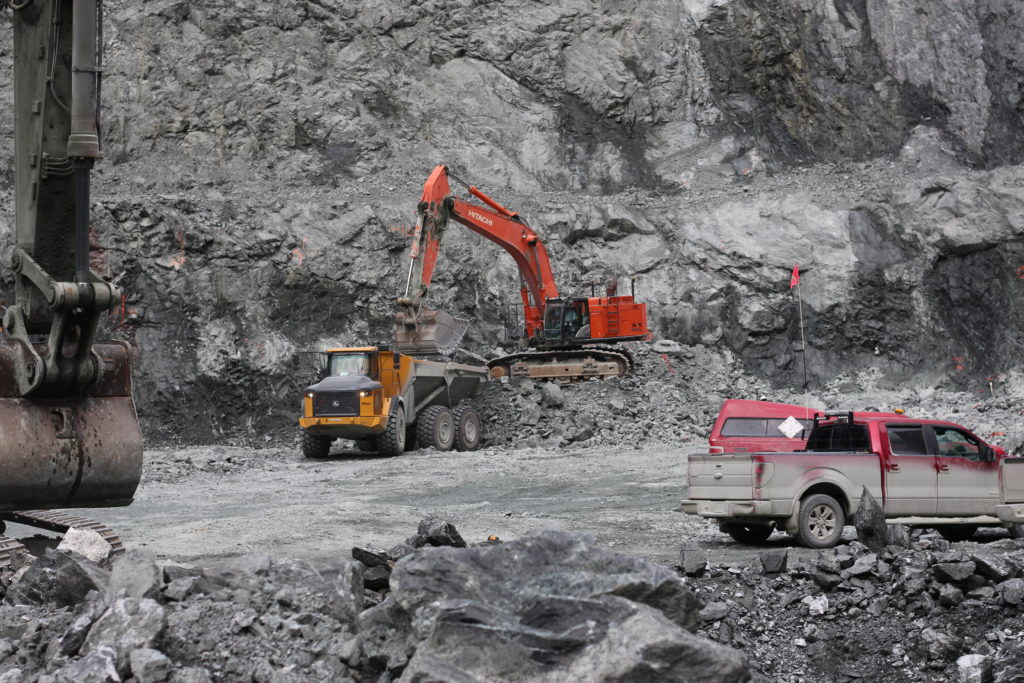 While the Stog’er Tight Deposit looks to become Anaconda’s next producing asset, there are many more prospective targets located in what is called the Scrape Trend. 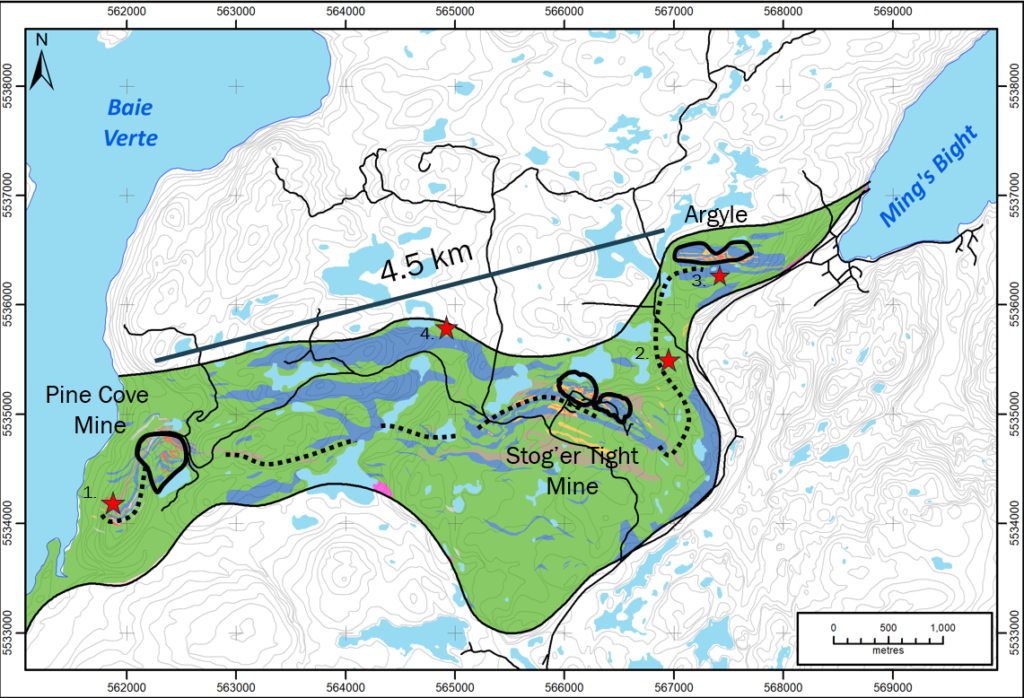 In the image above, you can see the exploration targets listed from 1 to 4. Starting on the left-hand side of the image with #1, is Anaroc, which is located in close proximity to the Pine Cove open pit mine.  Next, #4 is Corkscrew Road, followed by the #2 Connector and, finally, #3 the most explored of the targets, the Argyle Zone.

In a recent news release, Anaconda announced a flotation recovery of 97.3% and a leach recovery of 94.5% for a combined recovery of 91.9% of a 25 kg sample of blended core samples from Argyle, with an average grade of 2.69 g/ton gold.

Additionally, Anaconda’s geologists have identified other targets to the south and along strike using geophysical data. 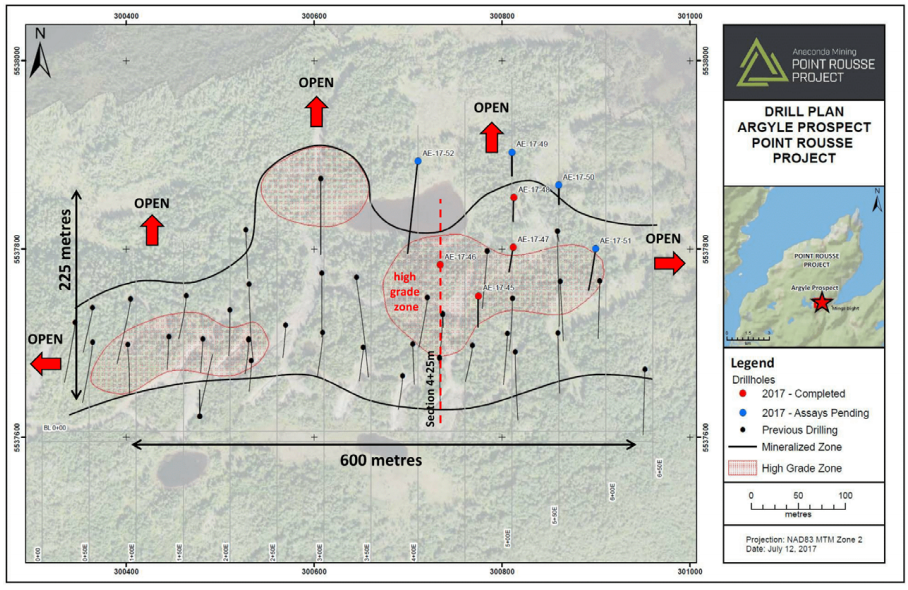 PUSH:  A maiden resource estimation for the Argyle Zone is expected to be announced in December 2017. Additionally, Anaconda’s team is working on an environmental assessment application, conducting metallurgical and ARD testing and government consultations. 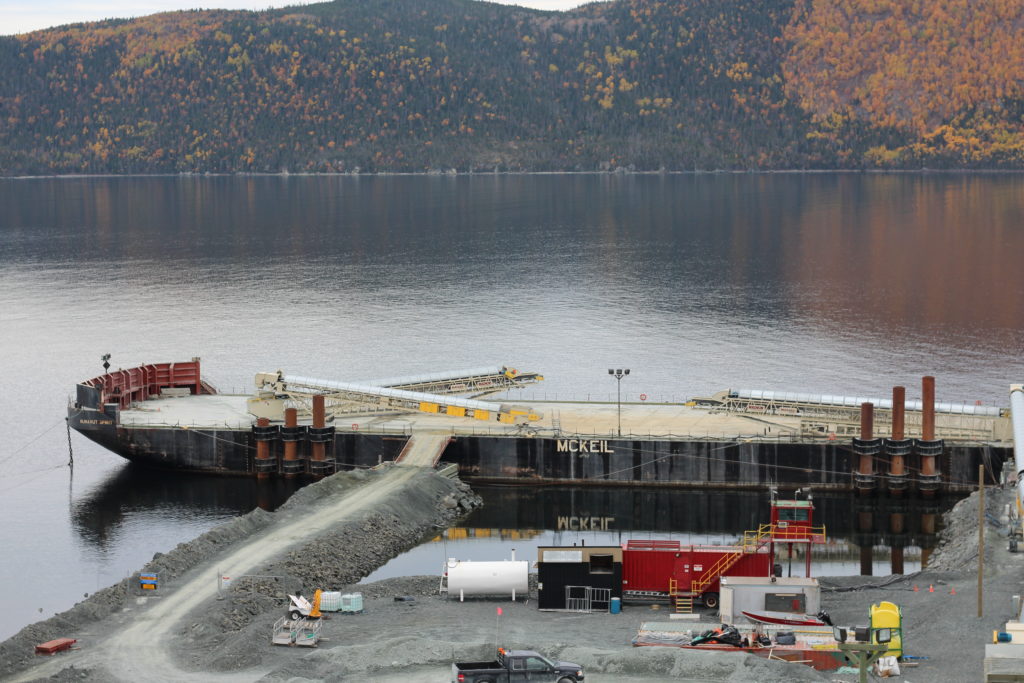 With the first Aggregates Project contract having just expired, Chislett mentioned that they intend to negotiate additional contracts in the future. In the last fiscal year ending on May 31 2017, the project generated $0.9 million.

From the first time we met, Anaconda’s CEO, Dustin Angelo, has told me that Anaconda has lofty goals for expansion, as they intend on becoming a 50,000 ounce per year gold producer. To more than triple their current production rate, they will, without a doubt, lean heavily on their latest acquisition, the Goldboro Project, which is located a couple of hours northeast of Halifax, Nova Scotia.

In recent news, Anaconda was able to raise $3 million dollars in a non-brokered private placement. VP of Exploration, Paul McNeill, says roughly half will be put toward further exploration and development at Goldboro.

In a news release on November 1st, Anaconda  announced a 6,000m diamond drill program, focusing on the Boston Richardson and East Goldbrook gold systems. The goal of the program is to expand the mineral resource along strike and down plunge, while also completing infill drilling in specific portions of the deposit as they look to move some of the Inferred resource up to the Measured and Indicated categories.

In the same release, Anaconda reported that initial drill core observations support the thesis that the Goldboro Deposit continues at depth, as the first diamond drill hole (BR-17-06) intersected the geological structure hosting the Boston Richardson System between 400 to 475 meters, which is 75 meters below the current resource model.

PUSH: Drill results from the recently commenced 6,000m diamond drill program. Expansion of the resource at depth and along strike has the potential to do great things for the economics of this project.  Pay close attention to drill results coming in the weeks and months ahead.

PUSH: Additionally, a PEA is scheduled to be completed by the end of this year, the economics of which could be enhanced with further expansion of the Goldboro Deposit.

Anaconda possesses a proven team with a track record for success in mining. I believe that Goldboro will be the next feather in their cap, as they look to develop the Project into a producing mine. For a detailed look at Anaconda, check out my last article here.

Before my visit, I felt the future was very bright for Anaconda. After seeing their Point Rousse Project in person, I’m convinced Anaconda is a company that is dedicated to empowering its people. It has not only survived the depths of the recent bear market, but has emerged in this new gold bull market as a premier gold producer, set to grow in the coming years.

I’m looking to add to my position in Anaconda in the weeks ahead, and see weakness in the share price as an opportunity. Putting it all together, there’s a lot of news flow to watch for in the coming weeks and months, which could provide some PUSH for the stock price:

Disclaimer: The following is not an investment recommendation, it is an investment idea. I am not a certified investment professional, nor do I know you and your individual investment needs. Please perform your own due diligence to decide whether this is a company(s) and sector that is best suited for your personal investment criteria. Junior Stock Review does not guarantee the accuracy of any of the analytics used in this report. I do own Anaconda Mining Inc. shares. Anaconda Mining Inc. is a Sponsor of Junior Stock Review.