In July, the Rogers International Commodity Index (RICI) had its best month since September, 2016, according to Price Asset Management, a US-based firm that manages a commodity fund based on the RICI index.

The index was up 3.13%, slightly ahead of the benchmark Bloomberg Commodity Index (BCOM) which was up 2.26%.The RICI is a composite, US dollar-based index designed by legendary commodity investor Jim Rogers Jr. in the late 1990’s. Metals continue to be the leading sector as both precious and industrial metals are showing strength as a result of continued strong fundamentals and global disturbances supporting precious metals. 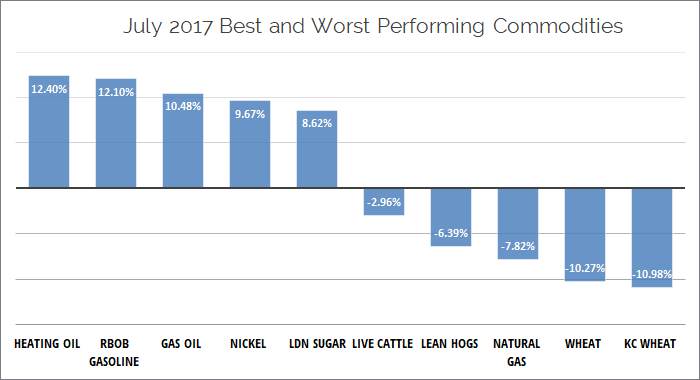 For the year, the RICI was down 2.82% versus a 3.12-per-cent downturn in the BCOM. July was the first month of 2017 where commodities outperformed US Equities, with the S&P 500 Index up 2.06%. The increase in the RICI was very broad based as 29 of the 37 components were positive for the month. The index was led by the energy sector which was up 6.68%, followed by metals up +2.51% and agriculture down a slight 0.42%, For the year  so far, metals continue to be the leading sector as both precious and industrial metals are showing broad strength as a result of continued strong fundamentals and global unrest supporting precious metals. Tin was the only metal in the negative at 1.46% for the year.

According to Alan Konn, Managing Director of Price Asset Management LLC, commodities, after an extensive bear market, are now up over +15% from a low in February of 2016. Prices of the RICI components are on average still 50% below their highs. He notes that the recovery has started with tremendous pressure on producers due to the prolonged downturn which has caused marginal production and capital expenditures to be cut. With the possibility of rising interest rates, increased inflation expectations, and fiscal stimulus in the form of global infrastructure spending replacing quantitative easing; the global macro outlook appears decidedly positive. These global macro forces that should be positive for some commodities but may also cause problems in other asset classes.

About the Rogers International Commodity Index:

The Rogers International Commodity Index® (RICI®) was developed by Jim Rogers to be an international, diversified, investable raw materials index. The RICI® currently has thirty-seven commodities representing the energy, metals, and agricultural sectors.   The index is a basket of commodities consumed in the global economy. The index’s weightings attempt to balance consumption patterns worldwide (in developed and developing countries) with specific future contract liquidity. The value of this basket is tracked via futures contracts on 37 different exchange-traded physical commodities, quoted in four different currencies, on nine exchanges in four countries.

Price Asset Management, LLC (PAM) has been registered with the CFTC as a Commodity Trading Advisor (CTA) and a Commodity Pool Operator (CPO) since 2000, and has been managing its main commodities fund since 2007.  PAM is an SEC Registered Investment Advisor, a member of the National Futures Association (NFA), and has adopted the Global Investment Performance Standards (with independent verification) and the CFA Institute Asset Manager Code of Professional Conduct.  PAM operates with robust compliance and risk management, offsite IT redundancy, business continuity and disaster recovery planning, with external audit and fund administration.

The evidence is mounting that the commodity markets will get back to “normal” after the sovereign debt crisis is resolved and growth from China, India, Africa and other developing nations is confirmed.

Gus Gunn, of the British Geological Survey, has identified three main factors behind the steep rise in commodities demand this decade:

There is no shortage of individual reasons why some argue that the price of commodities will continue to rise, but when taken together the evidence starts to be overwhelming:

Will all of these reasons, working together, translate into higher commodity prices? Have today’s worries only temporarily unseated a commodities supercycle? Is the recent sell-off nothing more than a short downturn within a secular bull market for commodities?

Since the financial crisis of 2008, resource companies have: