If you’re looking for leverage to a rising gold price then I would stick to the junior miners (GDXJ) over the majors. Many of the large miners (GDX) have had to take huge write downs on some poor decisions in questionable jurisdictions. However, there are a few junior producers and explorers in North America in mining friendly jurisdictions with improving balance sheets and better growth profiles. I believe they are superior bets.

The investment community is beginning to realize gold and silver may be on the verge of a huge move higher. Recently we witnessed the biggest daily gain in more than six months. These sort of moves after a three year base may be indicating short covering combined with major accumulation. The big money value investors may be adding miners to their portfolio. Why is capital finally entering the junior miners? Investors are growing increasingly concerned with geopolitical tensions in the Middle East and Eastern Europe.

Investors need to pick carefully in the junior mining space and research the asset, share structure, balance sheet, jurisdiction, growth profile and investigate to see if management is ethical. Its not easy finding the winners which can increase possibly 500% or more. Investing in junior miners is like Babe Ruth. He was the home run king but also had a lot of strikeouts. In the junior mining space, the more homework you do the better odds of hitting a home run and not striking out.

I have always focused on Nevada which is safe and mining friendly. The two biggest gold producers Newmont (NEM) and Barrick (ABX) make a ton of profit there and are looking for new resources in Nevada rather than Africa or South America. Remember Nevada produces 6% of the world’s gold. That could climb higher as new discoveries are made and as the gold price dropped. 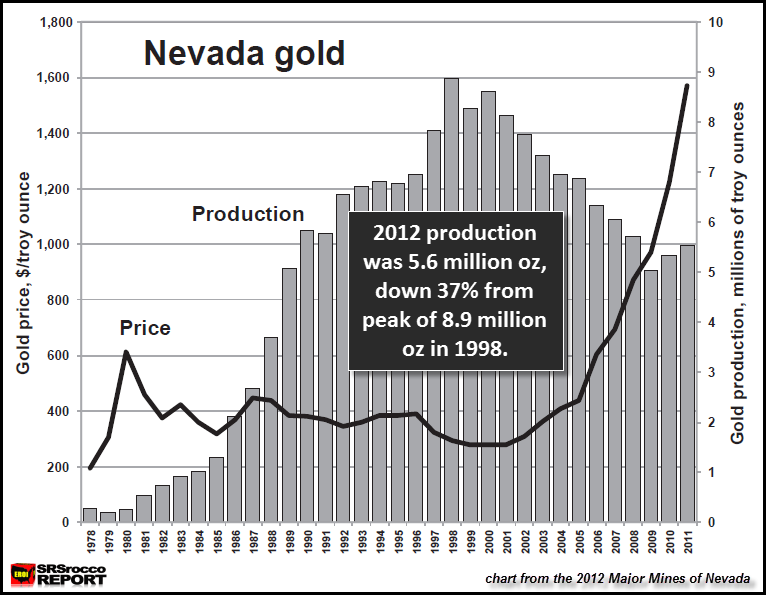 During this gold correction, miners needed to focus on lower cost targets. For Barrick and Newmont their Nevada gold production has the lowest cash costs in the world and are much less risky politically than mines in other locations. Newmont paid high prices for Fronteer Gold (FRG) back in 2011, which I owned and recommended to my subscribers back in 2010 for its Long Canyon deposit. Discoveries in Nevada fetch a high premium compared to assets in more hostile places.

For the past several months and most recently on June 6th, I highlighted Canamex Resources (CSQ.V) who has two NYSE dividend paying gold mining producers as strategic investors. The two largest shareholders are Gold Resource Corp (GORO) and Hecla (HL). Either one of them has deep enough pockets to buy out Canamex who is continuing to hit impressive drill results at their Bruner Project in Nevada. Watch a break through $.14 for its next run which could take it to the next price resistance at $.25. The breakout may be imminent. 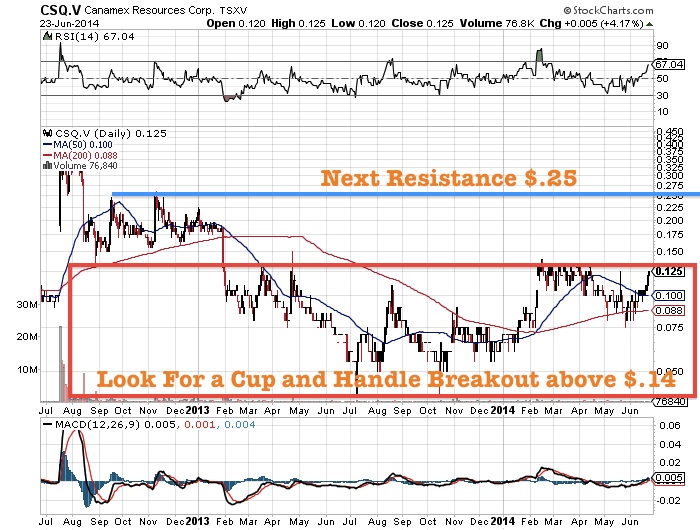 As I repeatedly said before in several reports that both NYSE companies have some of the best technical personnel in the mining sector. Canamex’s Bruner Project is one of the few that has passed and scored high on the due diligence examinations of two proven gold producers. I believe with continued drilling success we could see a breakout sooner rather than later. Why does Hecla (HL) or Gold Resource (GORO) like this asset? High grade, near sufarce and heap leachable assets have lower risk and quicker payback. Canamex’s Bruner Project is located in the Walker Lane in mining friendly Nevada. Canamex is actively drilling 10,000 metres and hitting impressive results. Drilling continues to support that there are high grade portions within the historic resource area. In addition, look at the drill result from May 21, 2014 where Canamex Resources (CSQ.V) intersected over 70 meters of 3+g/tonne. This is very positive developments for Canamex and I am delighted to see new results today.

In my opinion, Canamex is undervalued compared to its peers.  For instance, a comparable hole was just hit in Nevada by a company with an 80+ million market cap of less than 70 m at .9 g/t gold.  Canamex is hitting better results and has a market cap less than one quarter of its peer.

Please see my last interview with Bob Kramer who was passionate about this project and would be proud to see these results.  He was so excited by the drilling season this summer before he suddenly passed away.

Disclosure: I am a CSQ.V shareholder and the company is a website sponsor.

Be aware of conflicts of interest and please do your own due diligence.