Nickel is an indispensable compound in steel production and is known as the “silent saviour” because it plays a role in the global transition to clean energy and is one of the key metals for battery assembly in electric vehicles for companies like Tesla, Volkswagen, Mercedes, and more.  In 2020, despite the global pandemic, global nickel production totalled 22 million tonnes. Global nickel mining production is expected to rise again this year, with GlobalData estimating an increase of 6.8% to 25 million tonnes.

According to the US Geological Survey, total nickel reserves are estimated at 94 million tonnes. That total counts Australia and Indonesia as holding some of the largest reserves in the world, with big production numbers as well.

Production slowdowns were not a particular problem for the nickel mining industry, and the industry was more than able to make up for lockdowns and restrictions by keeping operations running in multiple countries using caution and the right safety measures. The total 22 million tonnes produced in 2020 is a testament to the resiliency of the industry and the fact that while demand may have shrunk temporarily in the period, production must continue to keep up with ongoing demand that continues to rise. 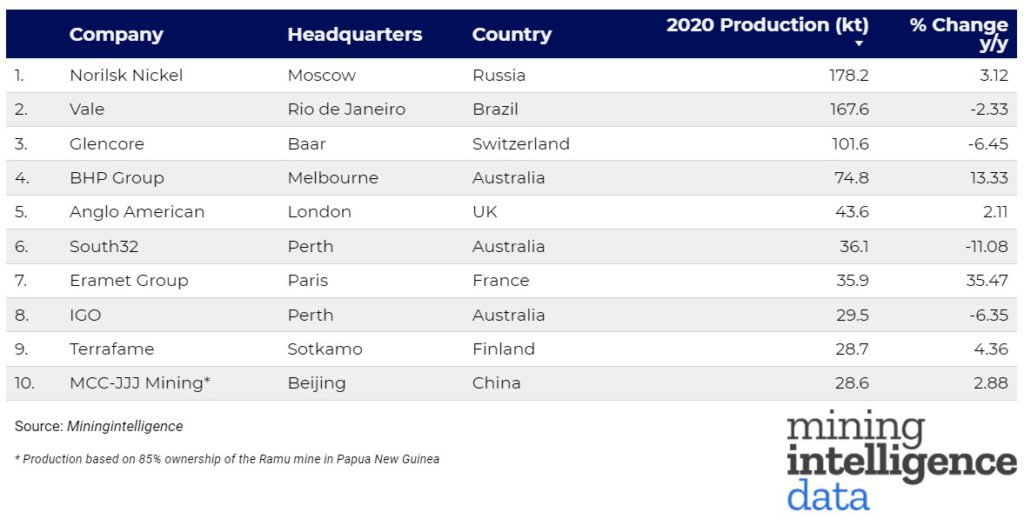 Russia Norilsk Nickel (Nornickel) was the top nickel producer with approximately 178 kilotons (kt) of production, up from 172 kn in 2019. The Nornickels Kola Division, which includes five mines, is being reviewed for its environmental footprint and has pledged $5 billion over the next decade to clean up the pipelines on the Kola Peninsula.

From its Brazilian proejcts, Vale (NYSE:VALE) is in second place with 167.6kt, down from about 171kt the year before. PT Vale Indonesia says it plans to begin construction of its Pomalaa nickel project next year. The mining giants in third, fourth and fifth place are Glencore (OTC:GLNCY), which has assets in Australia, Canada and Europe and collectively produced 101.6kt and 108kt in 2019 ; followed by BHP (ASX:BHP) with 74.8kt from its nickel west business in Australia, and Anglo American (LSE:AAL) with 43.6kt from its Brazilian business.

The Chinese company MCC JJJ Mining, whose production is based on its ownership of 85% of Ramu Mine in Papua New Guinea, rounds out the top ten and is one point behind Finnish Terrafame with 28.6 kts of nickel production in 2020. Perth-based IGO produced 29.5kts and Terrafames followed close behind with 28.7kTS.

A Metal for an Electric Future

Nickel is known as the “silent saviour” because it plays a role in the global transition to clean energy and is one of the key metals for battery assembly in electric vehicles. The nickel group is of extreme importance to the global economy and the mining industry in countries in every corner of the globe.

Metallic mineralization occurs in the hard nickel group, which includes nickel, cobalt, copper and chromium. The economic concentration of nickel is found in sulphide and laterite-rich deposits in Australia, Indonesia, South Africa, Russia and Canada which together account for more than 50% of the nickel resources in the world. Nickel mining has increased significantly over the last three decades, and known nickel reserves and resources are growing rapidly.

Due to the enormous use and demand for Canada’s nickel specifically, nickel-related products are exported to more than 100 countries. Nickel and its compounds are indispensable for the manufacture of countless products on which we depend.

Nickel, long used as a corrosion-resistant material in the steel industry, has exploded due to the mass production of cheap electronic equipment, most of which uses nickel in manufacturing. Demand for nickel has also increased in recent years and is becoming increasingly important in the electric vehicle industry. As demand for renewable energy increases, electric cars are increasingly dependent on copper, nickel, cobalt and other metals.

As the world moves away from fossil fuels, the demand for copper, nickel, cobalt and other metals will continue to rise. A 2017 World Bank report says that the industry will demand copper and nickel by 2050 at an increase of 250% if the world builds enough wind technology to keep global warming below 2 degrees – an increase over the Paris climate agreement benchmark. With the additional need from energy storage technologies, the demand for nickel will increase by 1,200 percent.

The same applies to cobalt, which is needed for lithium-ion batteries and can be degraded. According to a report by the World Bank on a low carbon future, there will be strong demand for a wide range of base and precious metals. In addition to the usual suspects such as cobalt and lithium-ion, the list includes aluminium, silver, steel, nickel, lead and zinc.

Cobalt is a silver-grey metal that was developed as a by-product of copper and nickel mining and is an important component of the cathode of lithium-ion batteries. Nickel is another ingredient needed in batteries and is expected to account for a large proportion of future batteries.