Solaris Resources (TSX:SLS) announced this morning its assay results from a set of additional holes from ongoing resource growth and discovery drilling programs at the Warintza Project in southeastern Ecuador.

Vice President, Exploration Mr. Jorge Fierro, commented: “We are pleased to see the continued growth of the Warintza Central zone, with every hole drilled having hit significant mineralization and the dimensions of the zone open and growing to the east, and broadening to the north and south where additional assays are expected soon. Our drilling fleet has now been fully reoriented to pursue aggressive growth and discovery drilling over the balance of the year and into 2022.”

The highlights from the project are as follows:

Future drilling will be focused on extensional and step-out drilling. This includes establishing the potential link to the Warintza East zone, discovery drilling at the other well-defined targets within the 7km x 5km Warintza cluster of copper porphyries, and focusing on the untested gold potential.

A strategic alliance was made between Solaris and the Shuar communities of Warints and Yawi in 2019 to overlook and engage in direct and transparent dialogue regarding all Warintza Project-related activities. This alliance allows the people of the community to build and promote trust, reciprocal support, cooperation and strengthen the decision-making capacity of the community. It allows them to have a voice in their community when direct change is taking place.

The company states the mandate will include but not be limited to positive results including employment, business development opportunities, appropriate health care, and emergency care services, development of community infrastructure, and education and skills training.

The Warintza Project is situated in southeastern Ecuador, in the same belt as the Fruta del Norte and Mirador mines, adjacent to San Carlos – Panantza copper deposits. Solaris Resources also has four other current gold and copper projects, including La Verde in Mexico in which Solaris has earned a 60% interest via JV with Teck Resources. 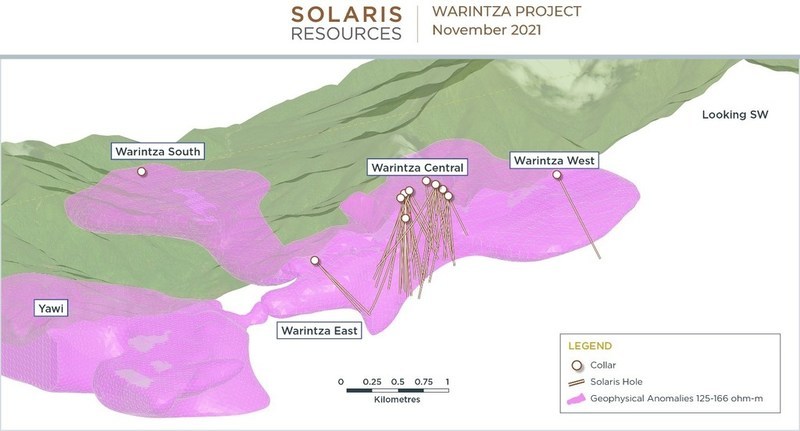