Kodiak Copper (TSXV:KDK) has reported new results for five drill holes at its 25,000-metre drill program at its 100%-owned MPD copper-gold project in British Columbia. The goal of the company’s initial efforts in 2022 was to establish a mining infrastructure, including route development and stockpiling at Gate. The company also worked on developing a mining operation at the site. Drilling on the Gate Zone and nearby look-alike geophysical are underway, with plans for additional drilling in 2022. Drilling revealed new high-grade copper-gold-silver intersections along a 170-meter gap at the Gate end, infilling an existing void. In addition, drill testing geophysical anomalies northeast of Gate has identified a 400-meter long parallel mineralized pattern in the Prime Zone.

Kodiak’s primary focus are its 100% owned copper porphyry projects located in Canada and the USA. The company’s most promising asset is the MPD copper-gold porphyry project situated in the productive Quesnel Trough in south-central British Columbia, Canada. MPD meets all qualifications of a large, multi-centred porphyry system.

Kodiak made the Gate Zone discovery of mineralization with a wide margin, and MPD holds several other targets that are similar and have the potential to be discovered. Kodiak also possesses the Mohave copper-molybdenum-silver porphyry project in Arizona, USA which is located near Bagdad mine. Both of Kodiak’s porphyry projects have historical drilling, as well as present known mineral discoveries that could possibly lead to large-scale deposits.

Claudia Tornquist, President and CEO of Kodiak commented in a press release: “The Gate Zone has delivered further impressive drill intercepts as we continue to increase the size of mineralized envelope which now extends to a kilometer in north-south direction and a depth of 900 metres. We also commenced testing geophysical targets with coincident copper-in-soil signatures in the wider area around the Gate Zone and are pleased that we were able to delineate a parallel mineralized trend at the Prime Zone. This new mineralized trend crystalizes further size potential and validates our model of a large multi-centric porphyry system at MPD. The Company has now expanded its exploration efforts to other high-priority areas like as Dillard and Man and we look forward to this next promising phase of work which should lead to more new discoveries like Gate and Prime across the 147 square kilometre MPD Project area.

Holes MPD-22-005, 006 and 008 were drilled at various azimuths and inclinations from two pads at the south end of Gate. These holes infilled a 170 metre gap between previous set-ups, while investigating higher grade mineralization and the correlation with 3D IP responses down dip to the east.

Holes MPD-22-013 and MPD-22-017 were drilled westward from sites 400 metres east of the Gate Zone. These holes were drilled to test 3D IP responses at depth and along strike of trenches and shallow drilling on historic Prime claims. New drilling confirmed the continuation of significant copper-gold mineralisation plunging south and dipping to the east, similar to Gate. This trend is called the “Prime Zone” and when combined with previous work, measures 200 metres wide (east-west), with over 400 metres of strike (north-south) and has been drilled down to 550 metres depth. Hole MPD-22-017 continued drilling westward past the Prime Zone and intersected the Gate Zone at 764 meters depth, ending in mineralization at 860 metres downhole. 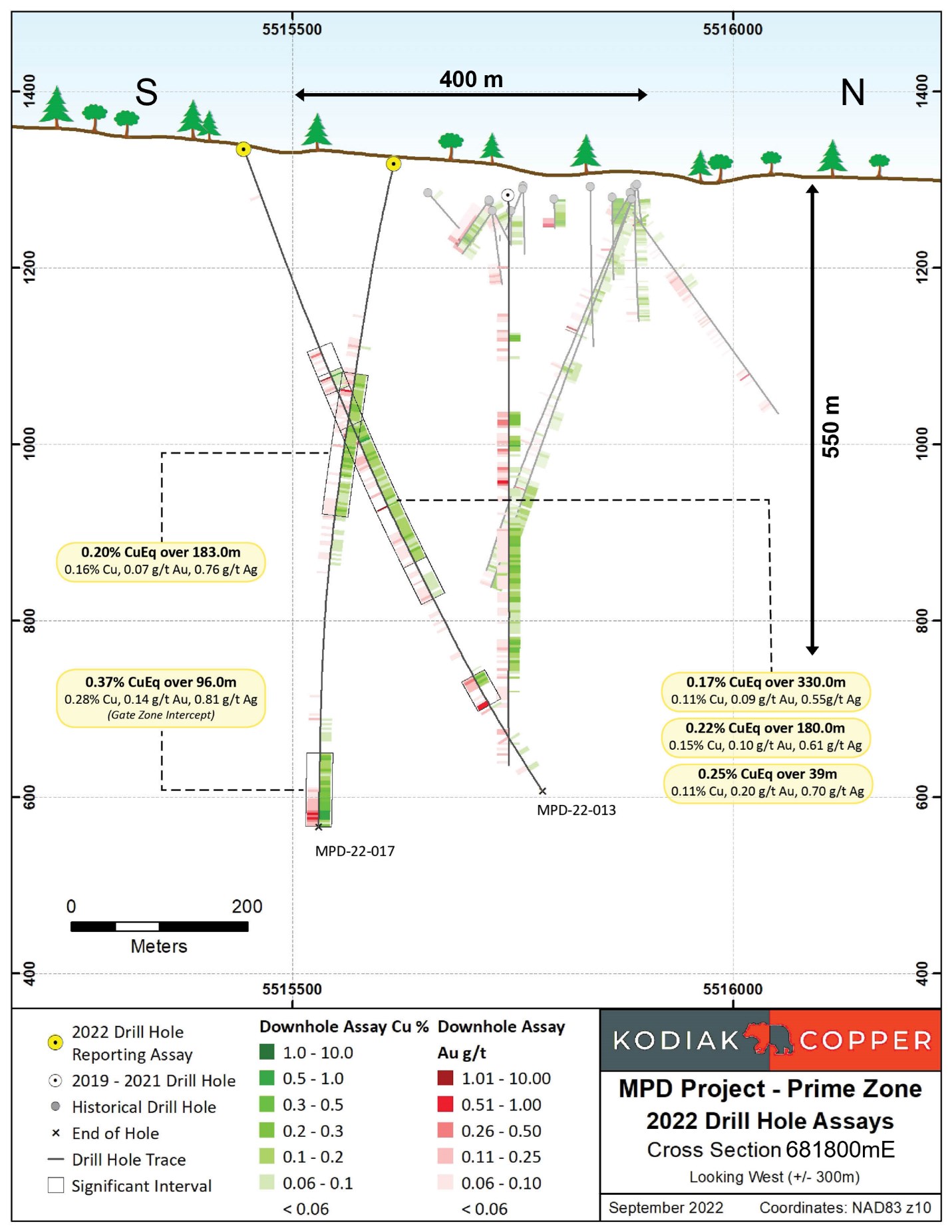